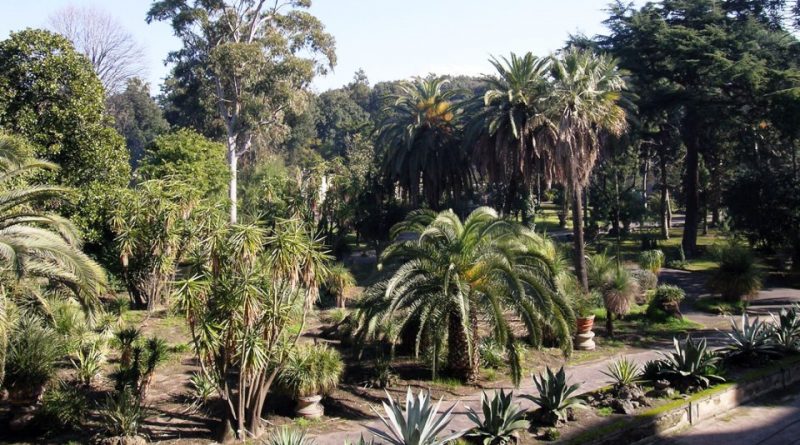 History –
The Botanical Garden of Portici was established in 1872, together with the Royal High School of Agriculture and is spread over the pre-existing gardens of the park of the Portici Palace. The royal site, built by King Charles of Bourbon in the first half of the 18th century, included two ornamental gardens of different sizes, organized in the French style, with citrus trees. In 1871, when it became available to the king of Italy Vittorio Emanuele II of Savoia, the entire complex was sold to the provincial administration of Naples, which assigned it to advanced agricultural training.
It was Nicola Antonio Pedicino, the school’s first botany professor, who transformed the gardens of the Palace into a Botanical Garden, with an initial area of ​​about 9000 m², adapting it to the new scientific and educational purposes.
In its largest part, known as the Soprano Garden, perennials were placed while in a smaller one, the Secret Garden, annual and studio plants. The subsequent direction of Orazio Comes gave the Garden a character of greater agricultural experimentation with the cultivation of different varieties of tobacco. In 1920 the Pathological Garden was also born, recovering an area previously attributed to the experimental station for cattle diseases.
Thus we arrive at the thirties of the last century when there was a renewed interest in the botanical complex; this materialized in the expansion of the existing collections, especially with the acquisition of exotic varieties from the botanical garden of Palermo. However, the work of accommodation and enrichment was interrupted in 1943 due to the war events. The allied occupation of the Palace and the park had devastating consequences, with the destruction of many plants and installations following the passage and parking of heavy vehicles. In 1948 the reconstruction began and with the extension of the surface to 20,000 m², the construction of three distinct areas, a fern, a palm grove and a greenhouse for succulent plants. Under the guidance of the then director Valeria Mezzetti Bambacioni not only the damages of the war were repaired but also the foundations were laid for the relaunch of the structure through functional improvements and the expansion of the collections.
Subsequently, on June 16, 2014, a violent atmospheric event hit the structure causing the loss of an important portion of the arboreal and botanical heritage.

Description –
Currently the Portici Botanical Garden consists of over 4000 specimens representing about 1000 species.
The most important collection is represented by desert plants, which include over 600 species of agavaceae, aizoaceae, cactaceae (about 400 species), didiereaceae and euphorbiaceae. Of particular interest are Gymnocalycium, Mammillaria and Rhipsalis; Alluaudia, Aloe and Kalanchoe from South Africa and Madagascar; and notable specimens of Welwitschia mirabilis from the South African desert. The garden also includes palm trees, ferns, conifers, carnivorous plants and edible and medicinal plants, as well as a heated greenhouse for succulents (1000 m²). 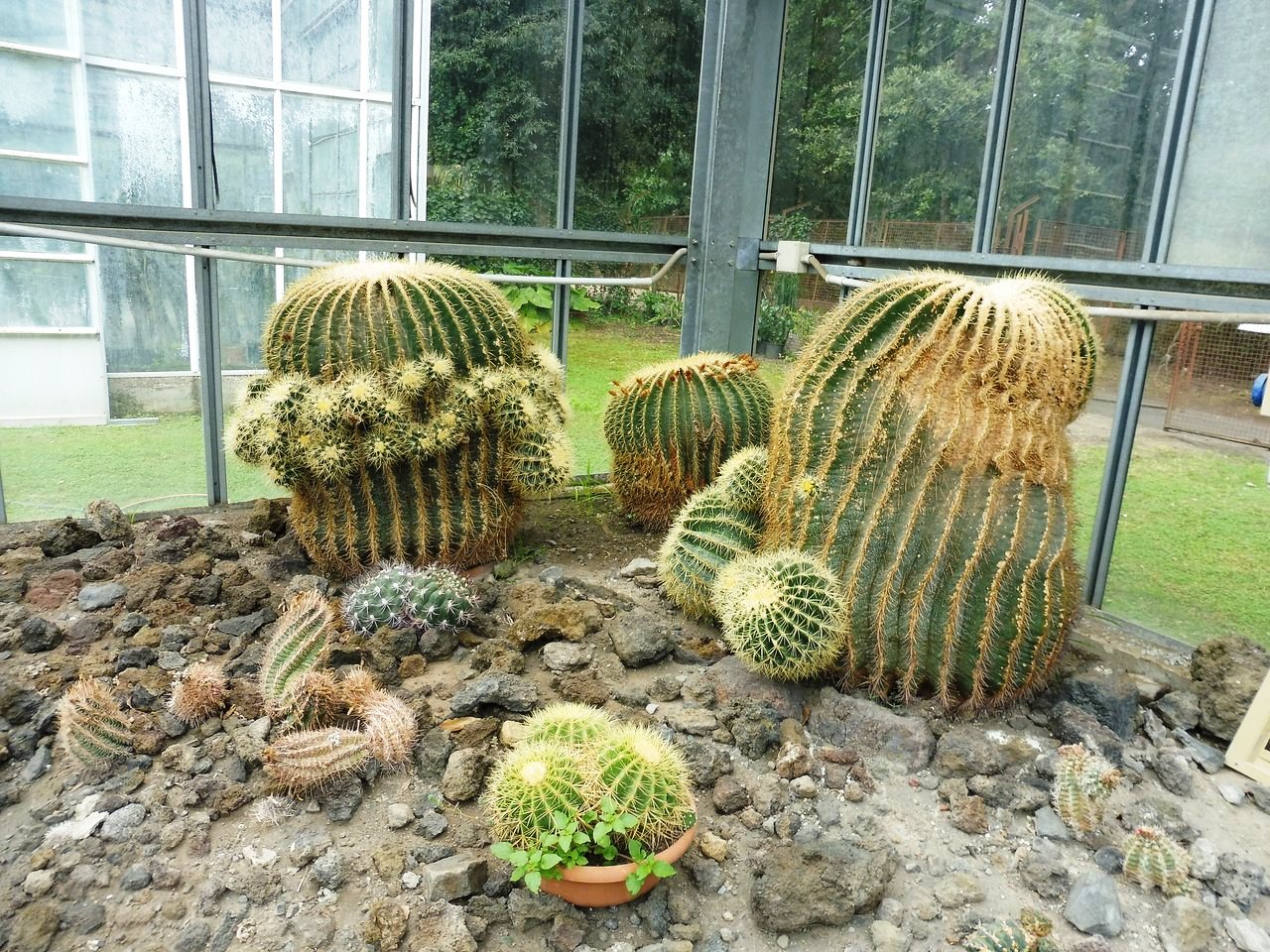 Structures and Collections –
The original plant of the Botanical Garden was born in the historic garden and includes four squares, sixteen caissons, twelve round flower beds and three circular basins and a historic greenhouse. The two squares on the right of the fountain are dedicated to conifers, magnolias and plants from the Mediterranean of the world, coming from Australia and South Africa. Of the two panels on the left of the fountain, the lower is dedicated to Agavaceae, Liliaceae, Iridaceae and Xanthorroaceae, the upper one to Myrtaceae, Lauraceae and Mediterranean plants.
The caissons are thematic and house a collection of Cycadaceae, Myrtaceae, Aloaceae, Cactaceae, Agavaceae, Aizoaceae, and plants from Asia. The basins, as well as the central fountain host water lilies and other aquatic plants; the circular flowerbeds, in volcanic stone, of more recent construction, are intended for palm trees and Chorysie.
The Serra Pedicino, restored in 2000, with its particular shape, houses a collection of epiphytic plants.
The majestic size of a carpelliferous specimen of Gingko biloba about 30 meters high and a Xanthorroea preissii, with a stem about 190 cm high, which blooms from time to time, stand out in the garden.
A stone structure welcomes the Primula palinuri, an important endemism of Campania, Basilicata and Calabria.
Adjacent to the historic garden and in the shade of the holm oak, the fern garden is one of the most evocative corners of the garden. The humidity necessary for the life of these plants is ensured by a pond, around which tree ferns and numerous other species from all over the world have been placed. One corner is dedicated to the Woodwardia radicans, a very rare relic of the tropical-montana flora of the Tertiary sector, now present in Italy in Sicily and Calabria and in Campania in Ischia and on the Sorrento peninsula.
The palm grove, placed in front of the fern, was obtained from a clearing of the wood. It currently houses 25 species of palm trees, as well as a small collection of Plumeria and a specimen of Grevillea robusta.
Interesting are the Jubaea chilensis and the Butia capitata with its tasty fruits and the large specimens of Syagrus romanzoffiana.
The succulent greenhouse is undoubtedly the flagship of the Portici Botanical Garden, hosting over 400 species of succulent plants from African and American deserts. Of note are the collections of Cactaceae, Aizoaceae, Euphorbiaceae, Didieraceae and Apocynaceae. The carpelliferous and staminiferous specimens of Welwitschia mirabilis stand out above all. Since 2002 the surface of the greenhouse has been expanded to 1000 square meters and the acquisitions of new specimens are constantly increasing to enrich the collections.
Like all the other botanical gardens, the botanical garden of Portici also mainly carries out didactic, scientific research and nature conservation functions. In this sense, over the last few years, the definition of collections has been oriented, which are, among other things, constrained by space problems that require limited choices.
An interesting collection is represented by the desert plants which is undoubtedly the most important; this has over 600 species divided into different families among which the most important are the Cactaceae (about 400 species), Aizoaceae, Euphorbiaceae, Didieraceae and Agavaceae. From the didactic point of view, this collection is of particular interest both as regards the different aspects (morphology, physiology, reproduction) of each species, and for the possibility of directly observing the phenomenon of evolutionary convergence. Particularly rich are the collections of Mamillaria, Haworthia, Gymnocalycium, Euphorbia and Rhipsalis. Also of considerable interest are plants from South Africa and Madagascar belonging to the genera Aloe, Didierea, Alluaudia and Kalanchoe. Among others we remember, in particular, splendid staminiferous and carpelliferous specimens of Welwitschia mirabilis Hook. of the South African deserts, which found optimal growth conditions in the Vesuvian lava substrate.
The rest of the collections mainly consist of conifers (in particular Cycadaceae), insectivorous plants and shrubs from different areas of the world (Australia, South Africa, California) characterized by a Mediterranean climate. A small section is dedicated to food and medicinal plants.
Ultimately, the inventory of the collections therefore includes over 1000 species with about 4000 specimens.