The housefly (Musca domestica Linnaeus, 1758) is an insect belonging to the family of the Muscidae order.

Geographic Distribution and Habitat –
The housefly is an insect widespread in every continent, where it accompanies humans almost everywhere except the extreme North and the extreme South of the American continent.
It is hypothesized that this species evolved at the beginning of the Cenozoic Era, about 65 million years ago and that it originated in the Palearctic region, particularly in the Middle East. Given their close commensal relationship with the human species, flies probably owe their worldwide spread to movements of co-migration with humans.
Its habitat is mainly that of human settlements, especially in areas with a greater presence of waste, decaying organic substances, etc. 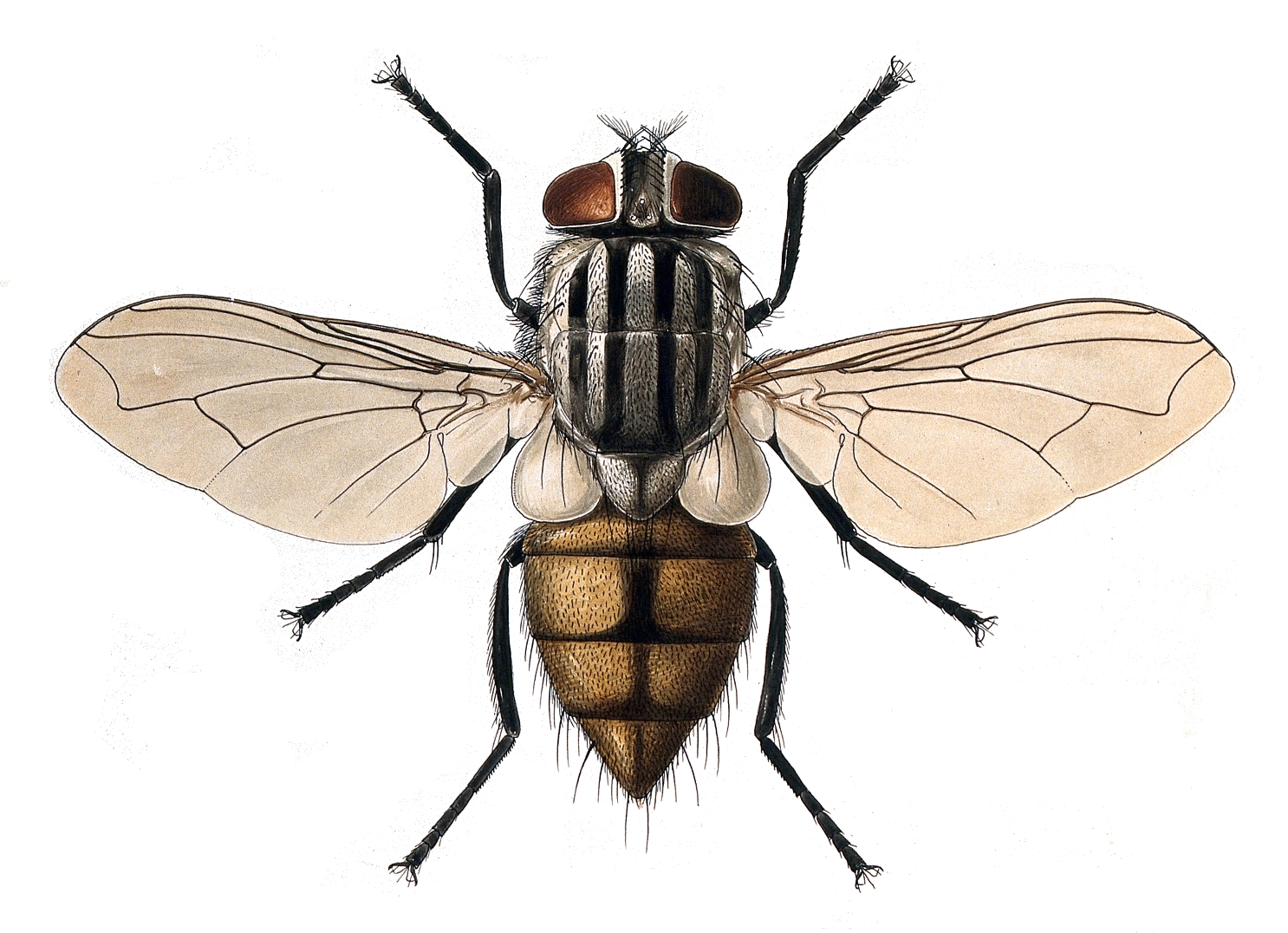 Morphology –
The Musca domestica, at the adult stage, is generally from 6 to 7 mm long, with a wingspan of 13 to 15 mm.
Females tend to have larger wingspan than males, while males have relatively longer legs. Females tend to vary more in size and there is geographic variation with larger individuals at higher latitudes.
This insect has a strongly convex head in front and flat and slightly conical behind. In the male the pair of large compound eyes almost touch each other while they are more separated in the female. They have three simple eyes (ocelli) and a pair of short antennae. House flies process visual information about seven times faster than humans, allowing them to identify and avoid attempts to catch or squash them, as they effectively see human movements in slow motion with their faster flicker melting rate.
They have a mouthparts particularly suitable for a liquid diet; the mandibles and maxillae are reduced and non-functional, and the other mouthparts form a retractable and flexible proboscis with an enlarged fleshy tip: the labellum. This is a spongy structure characterized by many grooves, called pseudotrachee, which suck in fluids by capillary action. It is also used to distribute saliva to soften solid foods or collect loose particles.
House flies have chemoreceptors, organs of taste, on the legs of their legs, so they can identify foods such as sugars by walking on them. House flies are often seen cleaning their legs by rubbing them together, allowing the chemoreceptors to relish whatever they walk after. At the end of each leg is a pair of claws, and underneath them are two adhesive pads, the pulvilli, which allow the housefly to walk smooth walls and ceilings using Van der Waals forces. The claws help the house fly detach the foot for the next step. House flies walk with a common gait on horizontal and vertical surfaces with three legs in contact with the surface and three in motion. On inverted surfaces, they alter the gait to keep four feet attached to the surface.
House flies land on a ceiling by flying directly towards it; just before landing, they make a half roll and point all six legs towards the surface, absorbing the impact with their front legs and attaching themselves a moment later with the other four.
The thorax has shades of gray, sometimes even black, with four dark longitudinal bands of uniform width on the dorsal surface. The whole body is covered with short hair.
Like other Diptera, house flies have only one pair of wings; what would be the rear torque is reduced to small halters that help the stability of the flight. The wings are translucent with a yellowish tinge at the base. The medial vein (M1 + 2 or fourth long vein) shows a sharp upward curve. Each wing has a lobe in the back, the caliper, which covers the halter.
The abdomen is gray or yellowish in color with a dark stripe and irregular dark spots on the sides. This has 10 segments that carry spiracles for breathing. In males, the ninth segment carries a pair of clasps for copulation and the 10th carries anal rings in both sexes.
The larva measures 9.5 to 19.1 millimeters.
The identification of the larvae uses a classification by stages. In the first stage the larva is 2–5 mm long; in the second stage 6–14 mm; in the third stage 15–20 mm. Respectively, these stages for house flies are reached in about 2-3 days, 3-4 days and 4-6 days from egg laying.
This species can be confused with other similar species, such as Fannia canicularis, Stomoxys calcitrans and other members of the genus Musca such as M. vetustissima and other genera such as M. shanghaiensis, M. violacea and M. varensis.
Systematic identification of species may require the use of region-specific taxonomic keys and may require dissections of the male reproductive parts for confirmation.

Attitude and Life Cycle –
Musca domestica is able to reproduce with extreme ease both for the ability to lay eggs inside any decomposing biological material, and for the speed with which the larvae reach the state of an adult individual, becoming in turn capable of reproducing in about ten days.
During its life cycle, which in optimal food and environmental conditions can vary from 2 to 4 weeks, this insect is able to lay up to 1000 eggs (500 at a time in groups of 150-200 each every 3-4 days) .
The female can lay, on average, from a little less than a thousand eggs to many more in 100-150 depositions; hatches usually occur within 48 hours; the larvae, depending on the temperature, humidity and suitability of the substrate, mature in a few days or a few weeks.
In general, the entire biological cycle of flies lasts from 8-10 to 45-50 days.

Ecological Role –
The housefly spreads and multiplies mainly as a function of the great availability of food in the vicinity of human settlements and the abundance of waste that can host the larvae; these factors, together with the high fecundity of the females, are the basis of the remarkable diffusion of the species.
To feed this dipteran, at the adult stage, it uses a rasping proboscis to feed. Solid foods are first sprinkled with saliva to be dissolved and then sucked with the trunk itself. Although they are house flies, generally confined to human dwellings, these insects can fly for a few kilometers from where they were born. They are active only during the day and at night they rest in the corners of the rooms or suspended from the ceiling.
In colder weather conditions, the fly spreads only if they cohabit with the human species, above all because they have a tendency to aggregate and are difficult to chase away.
Especially in areas and houses with poor hygienic conditions the housefly can transmit disparate and often serious diseases (such as typhus, cholera, salmonellosis, shigellosis, tuberculosis, anthrax, eye infections and endoparasitic worms). The techniques used and usable against flies are very numerous, even if none allow or guarantee complete or definitive results (exclusion, mass capture and chemical control techniques).