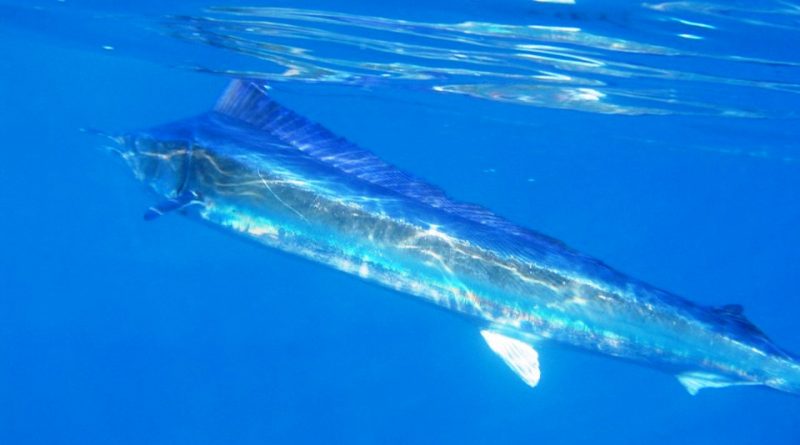 The Mediterranean spearfish (Tetrapturus belone Rafinesque, 1810) is a large sea fish belonging to the Istiophoridae family.

Geographic Distribution and Habitat –
The Mediterranean spearfish is an endemic fish of the Mediterranean Sea, mostly present in the central region. This range is singular given that in general the endemic fish of the Mediterranean are small coastal and benthic species and not large pelagic animals. It has always been well known in the Strait of Messina region while it was much less common in the other Italian seas.
For some years, perhaps due to global warming, it has expanded its range northwards; it is present in the Mediterranean, in the Ionian, in the Tyrrhenian and in the southern Adriatic.
It is a migratory species that appears in the same places always in the same period, with a habit of pelagic life; it lives offshore in open waters without any relationship with the bottom and is only occasionally found near the coast.
It is an epipelagic species that is able to go up to 200 m of depth, but prefers to remain between the thermocline and the surface.

Description –
Tetrapturus belone has a cylinder-shaped body (the young individuals are more compressed laterally) which narrows towards the tail fin.
The scales are very small and encapsulated in the epidermis. At the base of the tail there are two modest lateral keels, against only one for the swordfish, from which it also differs for the presence of the ventral fins. The rostrum is strong and not flattened.
The jaws have no teeth. On the palatines; there are plates with small teeth.
The first dorsal fin has the first 4 rays high and the others decreasing; the second, with six rays, is separated from the first and at the same height as the anal. The tail is large, crescent-shaped and semilunar with narrow lobes. The pectorals are short and falcate. The ventral ones are filiform and composed of 1 spiny ray and four soft ones welded together.
It is very similar to the white marlin, rare in the Mediterranean but has a pointed rather than rounded dorsal fin lobe, much shorter pectoral fins, shorter rostrum.
The livery is dark gray-blue, sometimes almost black on the back and white on the belly, with the two colors separated by a clear line.
It reaches, and exceeds, 2 meters in length and 50 kg in weight.

Biology –
The Mediterranean spearfish is a migratory pelagic species with reproduction that occurs in spring and summer.
The eggs and larvae are pelagic.
Juveniles have unique and very high dorsal fins like sailfish.

Ecological Role –
The Tetrapturus belone is a solitary animal. Almost all the specimens are accompanied by one or more remora of the Remora osteochir species.
Among the similar species we recall the Atlantic marlin (Tetrapturus georgii (Lowe, 1841), a species typical of the eastern Atlantic Ocean which sometimes penetrates the Mediterranean Sea. It is very similar to the imperial garfish, from which it is distinguished mainly by longer.
Tetrapturus belone feeds on fish and pelagic cephalopods. Its most frequent preys are saury, garfish and clupeidae.
It is a fish subject to fishing by both professional fishermen who catch it both with nets and with longlines or harpoons, using the same tools used for swordfish. It is understandably popular with sport fishermen as well. It is mainly trolled fishing. The meats are excellent, similar to those of swordfish.
In the Strait of Messina from July to September they are captured with harpoons from the catwalk of the feluccas.