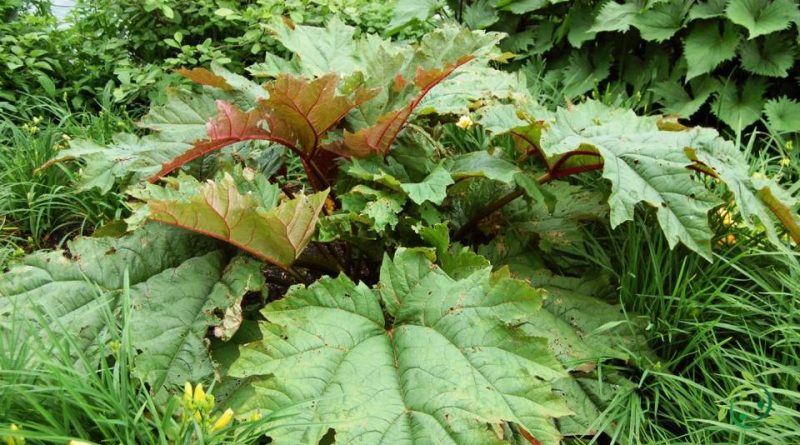 How Chinese Rhubarb is grown

Chinese rhubarb (Rheum palmatum L., 1759) is a perennial herbaceous plant of the Polygonaceae family, native to Central Asia.
This plant is also cultivated in Italy for both ornamental and medicinal purposes.

Weather conditions –
Chinese rhubarb is a plant that grows in not very hot climates, so its cultivation goes better north or in the hills or mountains.
A moderate temperature allows for a longer period of production and therefore a greater harvest, which is why it should be grown more in the shade in warmer areas than in colder regions.
The plant, on the other hand, tolerates winter cold well, going into dormancy in the colder months.

The terrain –
Chinese rhubarb is a plant that has no particular needs, from a pedological point of view, but grows better in more organic and nitrogen-rich soils.
For this reason, before planting it is a good idea to prepare a basic fertilization, favoring the use of manure or compost.
On the other hand, the drainage of the soil is important as rhubarb badly tolerates stagnation.
For this reason, before sowing or transplanting this crop it is good to work well the portion where it is to be cultivated or, more recommended, to choose soils that are more draining per se.
The water must in fact drain easily because if it were to stagnate, creating a soggy and muddy soil around the roots, it would favor rot, which leads to the death of the plant.

Multiplication and planting –
As for the multiplication phase, cultivation can start from seed or starting from the transplantation of rhizomes.
In any case, it is important that in the planting phase (from rhizome) or transplanting starting from seedlings obtained by seed, it is advisable to use a planting sixth of two meters between one row and the other and at least one meter between the plants .
Obviously, if you grow it for amateur use, few plants are more than enough for any use.
Furthermore, if you start from seed, you plant the seed in a jar at the beginning of March, and then transplant in mid-April or May outdoors in the garden. If you start from seed, the plant will produce starting from the second or third year, so a little patience is needed compared to transplanting which is faster in giving harvest. In addition, the seedlings are then transplanted in mid-April or even May.
If you start from the rhizome you need to divide the head of a plant into several parts: each piece can be buried and will give life to a new plant. The important thing is to make sure that each portion of rhizome has at least one bud. This operation can be done in early spring or before winter.

Post plant processing –
The best technique to limit mechanical or manual weeding operations, to better favor the growth of the plant, is that of vegetable mulching. Weeds must be kept at bay especially in the first period of the rhubarb’s life, when the seedlings are still small, once the plant has grown it competes well. Weeding the soil, if it has not mulched, is useful because it breaks the surface crust and allows the soil to oxygenate.
An interesting alternative to green mulch is to associate rhubarb with dwarf clover, creating a ground cover around the rhubarb plants. The clover thus provides both soil cover (decreasing evaporation) and providing nitrogen as it is a legume.

Irrigation –
Irrigation of rhubarb is essential in the first phase of growth, from sowing (or planting of rhizomes) to greater vegetative expansion.
In this period, the soil must be kept moist, while once the rhizome develops and the root system increases in size, wetting is done only in case of dry climate and the absence of prolonged rain. When using irrigation, any form of stagnation must always be avoided.

Fertilization –
When fertilizing Chinese rhubarb, it should be taken into account that it is a perennial herbaceous plant, so with the harvest of the coasts, removing biomass we must provide for the reintegration.
In any case, it is very good, as previously mentioned, the association with clover, however, to the plant, especially in poorer soils, it is good to make an organic fertilization and to reintegrate every year, in early spring or, better still, in late autumn , with organic fertilizers.
Diseases and adversity –
Rhubarb is a plant subject to little adversity. The diseases it is most subject to are root rot, due to water stagnation, and some aphids especially at the beginning of spring, which is very limited by avoiding fertilizing with mineral nitrogen.

Forcing rhubarb –
A particular technique that rhubarb can be subjected to is forcing.
This technique allows to increase the quality of the rhubarb coasts and also to anticipate its production. It consists in keeping the rhubarb covered, special terra cotta bells can be used for this purpose.
Among other things, the covering on the one hand increases the temperature and therefore can lead to an earlier harvest in spring and also later in autumn, but above all by removing photosynthesis it makes the stem more tender and tasty, it concentrates the substances more in the coasts, to the detriment of the leaf.
In forcing the covering is maintained for about 10/15 days, sufficient time to inhibit chlorophyll. After this period, the part of the plant that we have etiolated can be discovered.

Collection and storage –
Harvesting of Chinese rhubarb begins in the second year, removing the leaf petioles deprived of the flap by hand. Usually one third of the leaves present are left on the plants. The rhizomes can be harvested in the 3-4th year, cleared of the earth, cut into slices and left to dry.