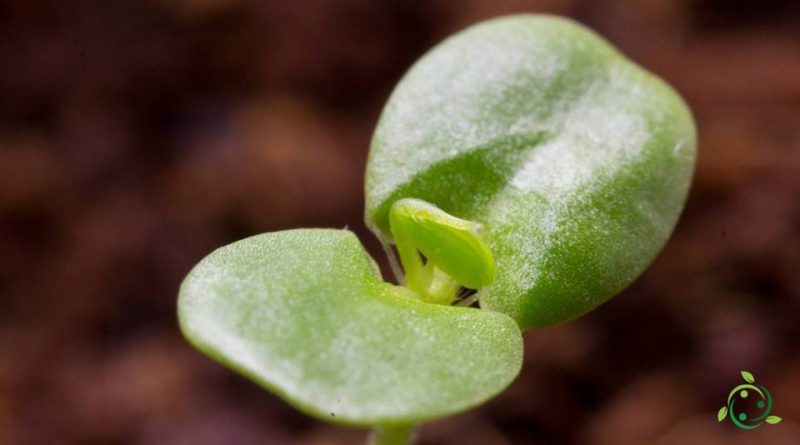 With the term cotyledons, in botany, we mean the embryonic leaves, that is the first leaves, already formed inside the seed, which will sprout at germination and which often contain a reserve of nutrients.
The term cotyledon derives from the Latin cotyledon -ŏnis, in turn from the Greek kotylēdṓn, a derivation of kotýlē ‘cup, cavity’.
Cotyledons are characteristic of seed-producing plants and can be:
– one in Monocotyledons;
– two in the Dicotyledons;
– from two to eighteen in Gymnosperms.
Cotyledons are fleshy leaves, with a simplified structure and, in general, with the function of nourishing the embryo from the beginning of germination to the moment in which the root and the first leaves develop and until the individual is able to perform photosynthesis, and therefore to feed autonomously.
From the anatomical point of view, the cotyledons are located halfway between the apex of the root and the apical bud, which will give rise to the shoot (i.e. the set of stem and leaves).

During germination, in hypocotyl growing plants (section between the radicle and the cotyledon (s)) the cotyledons come out of the ground and take on, in addition to the reserve function, that of photosynthesis (for example in the bean). The seeds with this characteristic are called epigei. Conversely, if the cotyledons remain in the soil, the seed is called hypogeum, with epicotyl growth (section between the cotyledons and the first true leaves), as occurs for the pea.
Normally cotyledons are related to the nutritional function of the embryo during germination. However, the cotyledons do not always have a reserve function, that is, they do not always accumulate starch and proteins to be made available to the developing embryo.
In the Graminaceae, for example, the reserves for germination are extra-embryonic, they are found in the albumen or secondary endosperm of the seed (from which, moreover, cereal flours are obtained). In this case, the only cotyledon, called scutellum, performs an austorial function, that is, it absorbs nutrients from the albumen to make them available to the embryo. The roots take the geotropic form, that is, they always tend to go down in any way you plant the seed.