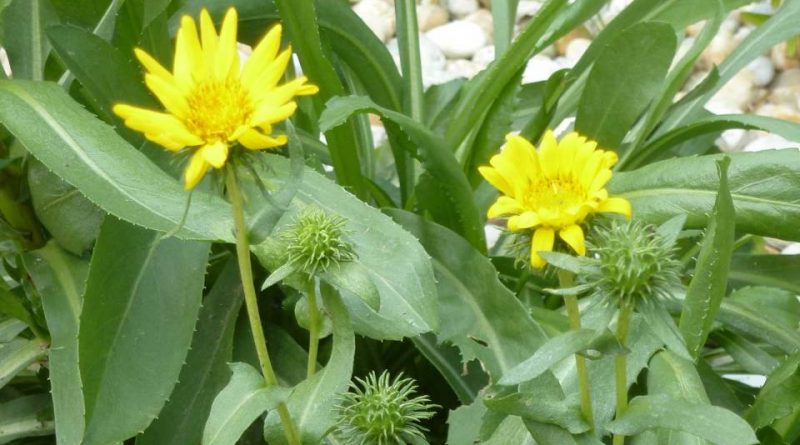 Etymology –
The term Grindelia of the genus was dedicated to the Latvian David Hieronymus Grindel (1776-1836), pharmacist, doctor and professor of botany in Tartu in Estonia.
The specific robust epithet comes from robur, vigorous strength, vigor: robust, vigorous, vigorous.

Geographic Distribution and Habitat –
Grindelia robusta is a plant native to western North America and found in the swampy regions of California and Northern Mexico. In Europe it was introduced by some missionaries and since then it has been widely cultivated for medical-phytotherapeutic purposes and as an ornamental plant. In Italy it is present as a spontaneous plant in Sardinia.
Its habitat is Habitat is that of the marine shores, in sunny and well-drained areas, where it thrives in arid areas and salty plains. 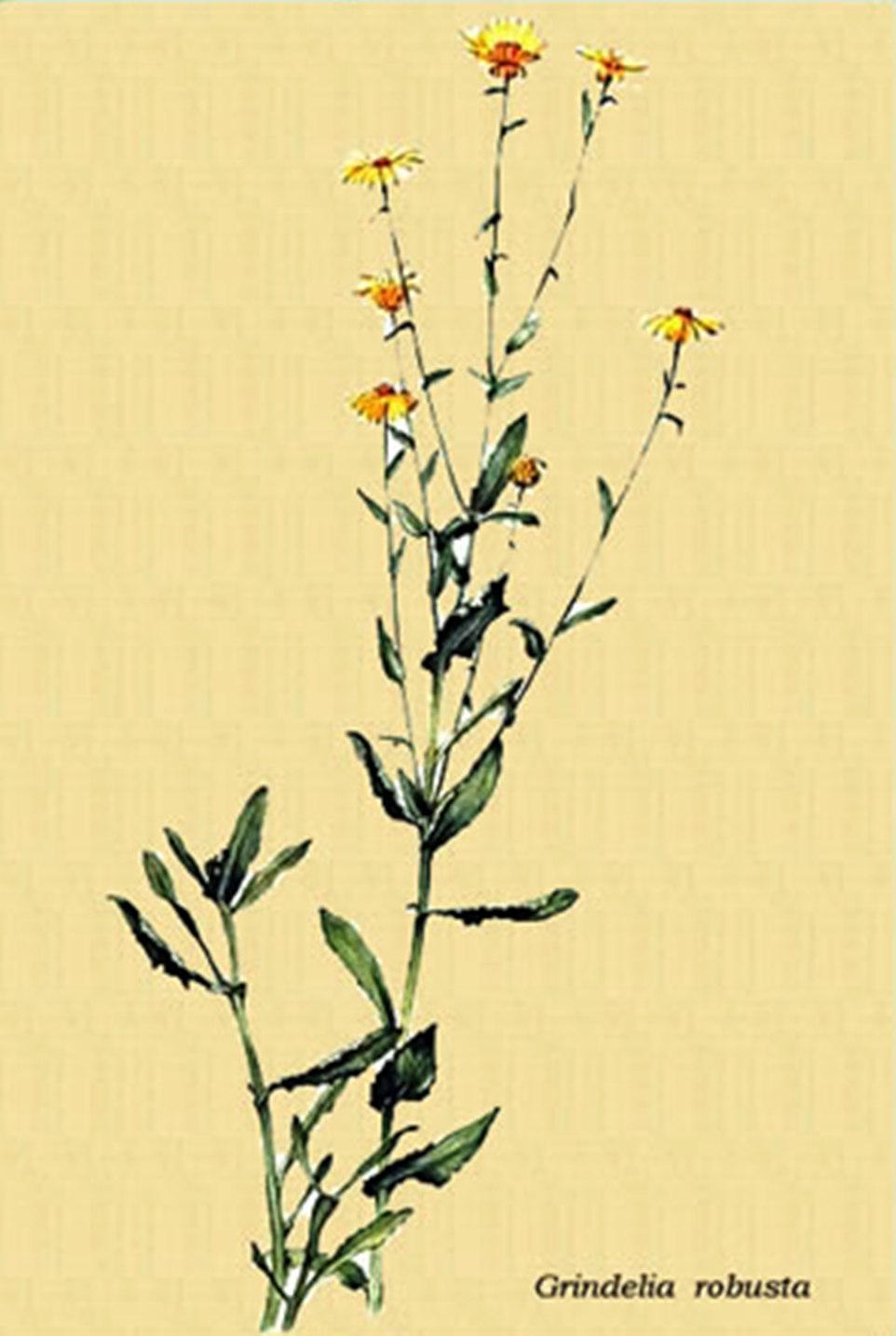 Description –
Grindelia robusta is a perennial herb, with a bushy habit, up to 1 meter tall.
It has a robust tap root with various secondary or adventitious roots with capillary section. The aerial part of the plant is made up of variously branched cylindrical, smooth stems which, from herbaceous plants, tend to lignify with aging.
The leaves are amplessicauli and have a different shape: the lower ones are spatula-shaped, oval and pointed at the base; the upper ones are alternate, ascending and have broad bases. Both are leathery, light green in color with jagged and rough edges.
The inflorescences are formed by two types of flower heads: the large and yellow peripheral ones are ligulate, and exclusively female, the numerous central ones and hermaphrodites are tubular. The receptacle is resinous and covered with lanceolate bracts. During the first phase of flowering, the spiny and curved bracts secrete a balsamic gummy brown substance that thickens on the still budding flowers.
The antesis is from July to September.
The fruits are smooth, oblong and slightly quadrangular achenes, with a characteristic pappus.
The seeds are oblong and dark.

Cultivation –
Great Valley Gumweed is a plant that loves full sun. If exposed to total shade it grows stunted and hardly produces flowers. Not afraid of the cold.
From a pedological point of view it is a rustic plant that grows well even in difficult, arid and sandy soils, as long as they are well drained.
It is a plant that tends to concentrate selenium in the leaves and stems, this is particularly evident in soils that are relatively rich in that element.
As for water supplies, it is satisfied with rainwater and generally should be irrigated only after planting, occasionally in summer and in the event of prolonged drought.
It has no particular need for nutrients but to favor the production of flowers, in spring an administration of a fertilizer for flowering plants gives good results.
The plant reproduces by seed.
Sowing takes place in protected seedbeds at the end of winter, from February to March or in late spring directly in the open field.
The soil should be loosened and kept moist until the seedlings are well developed.
The new Grindelia plants are transplanted in open field in spring, preferably when the risk of night frosts is definitively averted. After planting, the plants should be watered regularly to promote the rooting of the roots. Subsequently watering should be done in summer or if the local climate is very dry
The flower heads of Grindelia, which are the usable parts of the plant, rich in beneficial active ingredients, are harvested in the summer, at the beginning of flowering. The flowers are collected, mostly still closed, because they are richer in active ingredients.

Customs and Traditions –
Grindelia robusta is a plant with uses, as well as ornamental, for medicinal use while among the edible uses there is the use of the leaves in some parts.
As for the medicinal properties, it should be noted that the leaves and flowering tops are anti-inflammatory, antispasmodic, balsamic, emollient, expectorant, sedative, gastric and a vascular tonic.
The plant has the ability to purify the blood and is applied externally as a compress on inflamed or irritated areas of the skin.
When used internally, it slows the heart rate and reduces the stimulation of the nerve endings in the airways that causes coughing, making it extremely effective as a calming agent in the treatment of asthma.
This plant is used in Central America, as in Cuba, uses this plant with Jimson’s herb to combat asthma in the form of whistles.
This plant, in small doses, is diuretic and is used for urinary tract infections.
It is an anti-inflammatory remedy indicated for arthritis and rheumatism.
The active ingredients are:
– Diterpenic acids (grindelic acid), flavonoids (quercetin, chrysocriol, camphor), triterpene saponins, essential oil (0.5%).
Among other uses, it should be remembered that yellow and green dyes are obtained from flower heads and pods.

Preparation Method –
The flower heads of this plant are collected, mostly still closed, because they are richer in active ingredients, in the summer, at the beginning of flowering.
From the flower heads, which secrete the balsamic resin, pharmaceutical preparations are obtained in the form of syrups, tablets for the treatment of respiratory tract disorders: asthma, bronchitis and cough, with mucolytic, antitussive, anti-inflammatory and antibacterial properties.
A fluid extract is prepared by placing the freshly picked leaves and flowers in a small amount of boiling water for about 15 minutes.
A decoction is prepared from the roots which is used as a hair shampoo to kill lice.