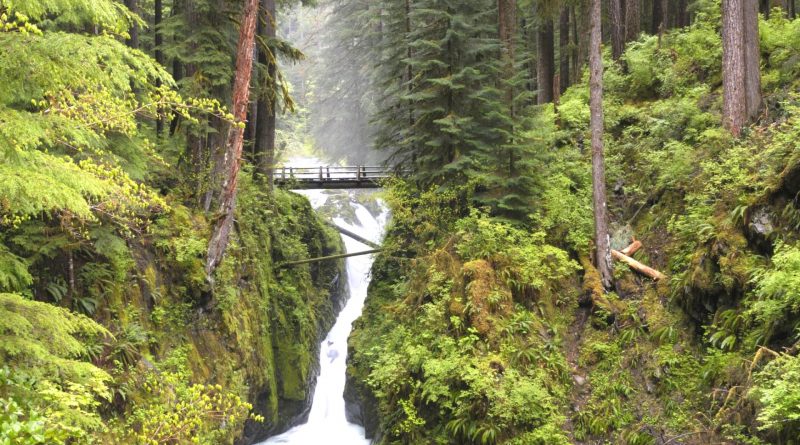 Olympic National Park, whose WDPA Code is: 974 is a US park with a land area of ​​3,734 km².
Olympic National Park is located in Washington state, not far from the city of Seattle and is administered by the National Parks Service.
Olympic National Park was established in 1909 by President Theodore Roosevelt, who named it Olympic National Monument. After Congress voted it as a national park, President Franklin D. Roosevelt signed the law in 1938. In 1976, Olympic National Park became a biosphere reserve and, in 1981, a World Heritage Site.
In 1988, the Olympic Wilderness was created for almost the entire Olympic Peninsula, further protection for the region.
Olympic National Park is divided into three macro-regions: Pacific Coast, Olympic Mountains, and Temperate Rainforest.
The coastal part of Olympic is an uneven sandy beach along a wooded strip. This is 105 kilometers long but only a few miles wide, with Native American communities at the mouths of the two main rivers. The Hoh lived near the Hoh River, while the Quileute lived in the town of La Push, at the mouth of the Quileute River. The stretches of uncontaminated coast reach 15-30 kilometers.
Some beaches are sandy, others are covered with rocks and large boulders. Bushes, dense vegetation, slippery ground and tides help to slow down even the most experienced hikers. Normally the indicated travel time should be doubled. It may be interesting to note that the coasts are easily accessible (unlike the hinterland) and there are few people more than a day’s journey from the coast.
The most popular stretch of coast is the Ozette Loop, which is approximately 13 kilometers long. From the Lake Ozette trail, a five-kilometer path winds along the coast through a marshy scrub of Tuia maggiore. Once you reach the coast, a five-kilometer walk crosses the ancient place inhabited by the aborigines, with some paths to follow in case of high tide. This area was traditionally the favorite of the Makah tribe of Neah Bay. The third five-kilometer trail is inaccessible for most people. It is the difficulty of the trails that makes Ozette so popular.
There are groups of trees that follow the line of the sand, for this you will find fallen branches and other parts of the beach tree. The legendary River Hoh, on the southern side of the coast, is essentially wild and dumps a considerable amount of pieces of wood and other debris, which tend to move north, enriching the beach.
The park is known for the uniqueness of its turbidites. Turbidities with calcite veins are clearly visible in it. The park is also known for its tectonic “breaches”, even as big as a house, called by the locals “stinking rocks” due to the strong smell of oil they emanate.

Geology –
At the heart of Olympic National Park are the Olympic Mountains, whose slopes are covered with huge, ancient glaciers. These mountains rose thanks to the subduction of the Juan De Fuca plate. The geological composition is a curious mixture of basaltic and sedimentary rocks. The western half is dominated by Mount Olympus which reaches 2,428 meters. Mount Olympus falls a lot of snow and therefore has the largest glacier of any non-volcanic peak in the states bordering the North Cascades. There are many glaciers, the largest of which is the Hoh Glacier, which is about five kilometers long. Looking east, the mountains are drier due to the rain protection offered by the western mountains. There are also numerous rocky peaks and ridges. The highest point of the eastern mountain range is Mount Deception with its 2,375 meters.

Environment –
The western side of the park is occupied by a temperate rainforest, which includes the Hoh Rain Forest and the Quinault Rain Forest, the wettest area in the continental United States (the island of Kauai in the state of Hawaii is wettest ). Being a temperate forest, rather than tropical, like the Amazon rainforest in South America, it is dominated by ferns, but it also contains dense forests formed by spruce and fir trees and the moss, which covers them, descends from the branches forming green and humid appendages.
Since the park is located on a peninsula, with a mountain range dividing it from the lands to the south, it has developed a unique set of plants and animals (such as the Olympic marmot) that cannot be found anywhere else. The southern coast of the Olympic Peninsula also represents the northernmost non-glacial region of the Pacific coast, with the result that, since the distance between the peaks and the coast during the last glacial maximum was twice the current one, it served also as a refuge from which plants colonized the glacial regions to the north.
It also provides habitat for many species (such as Roosevelt’s deer) typical only of the Pacific Northwest coast. Because of its importance, scientists have declared it a biological reserve and study the species present to better understand how plants and animals evolve. 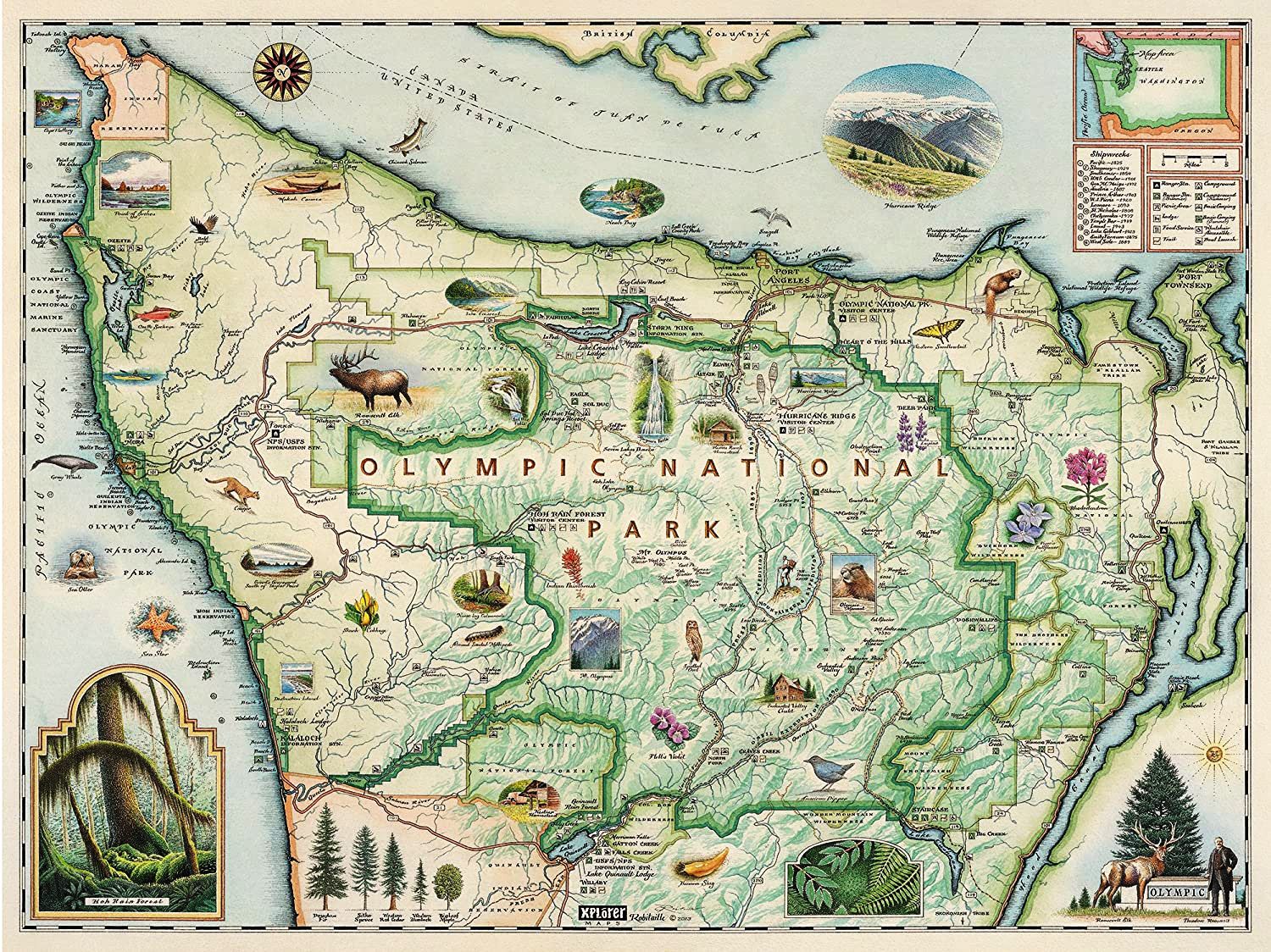 Flora –
Olympic National Park boasts an extraordinary diversity of plant life; from the imposing conifers over 20 floors high, to the tiny tufts of pink Douglas fir that leverage a life of rocky peaks.
Over 1,450 types of vascular plants grow on the peninsula, almost the same number as in the British Isles, an area 30 times larger. In addition, hundreds of species of non-vascular aquatic mosses, liverworts and hornworts also live here.
Olympic National Park and the surrounding Olympic Peninsula have snow-capped peaks plunging into the mist-shrouded coastline. Misty temperate rainforest on the west side, it is located just 34 miles from the dry oak savannah in the shade of the rain northeast of the mountains. These rapid changes in altitude and rainfall mean that many habitats overlap the interior.
Furthermore, although they are not true plants, many types of fungi and lichens also grow in these habitats.
Some of Olympic’s plant species are not native to this area as they are invasive exotic plants.

Fauna –
Olympic National Park is home to a wide variety of wildlife.
Offshore we find whales, dolphins, sea lions, seals and sea otters feeding in the Pacific Ocean. In addition, invertebrates of innumerable shapes, sizes, colors and textures inhabit the tide pools.
On land, some species, such as raccoons, beavers, and minks, mainly live in the plains. But others, such as deer, moose, pumas and bears, range from valleys to mountain meadows. The park’s waters are home to some of the healthiest Pacific salmon outside of Alaska. Over 300 species of birds live in the area at least one season of the year, from small penguin-like rhinos offshore to golden eagles flying over the peaks.
The park is also a rare refuge for species dependent on centuries-old forests, including some species protected by the Endangered Species Act. This park provides one of the last large tracts of untouched primeval forest in the lower 48 states. These humid forests provide essential habitat for northern spotted owls, marbled murrelet, and a variety of amphibians.
The wildlife community of the secluded Olympic Peninsula is also unique. This community is notable not only for its endemic animals (found only here), but also for the species missing on the peninsula but found elsewhere in the western mountains. Pika, ptarmigan, ground squirrels, lynxes, red foxes, coyotes, wolverines, grizzly bears, bighorn sheep and historically, mountain goats, have not been found on the Olympic Peninsula. Meanwhile, endemic species such as the Olympic marmot, Olympic snow mole, and Olympic stream salamander are found here and nowhere else in the world.
Olympic National Park is one of the most diverse wilderness areas in the United States. Its wide variety of ecosystems provides a vital habitat for the survival of sensitive species, such as wild salmon, northern spotted owls, and marbled murrelet. The Olympic is truly a haven for endangered species. It protects one of the largest remaining plots of pristine habitat for some threatened or endangered species.