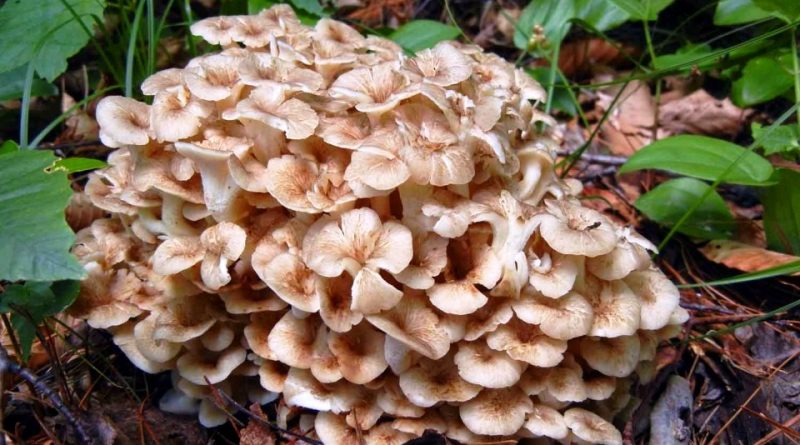 The lumpy bracket (Polyporus umbellatus (Pers.) Fr. (1821)) is a fungus belonging to the Polyporaceae family.

Etymology –
The term Polyporus comes from the Greek prefix πολυ- poly- very, many, numerous and from πόρος póros poro, passage: with numerous pores.
The specific umbellatus epithet comes from umbella umbrella, parasol, due to its conformation.

Geographic Distribution and Habitat –
Polyporus umbellatus is a saprophytic-parasitic ligneous fungus, not very common, which grows on the roots of broad-leaved trees, mainly chestnut trees but also beeches, oaks and maples in the period from summer to autumn in wet weather. 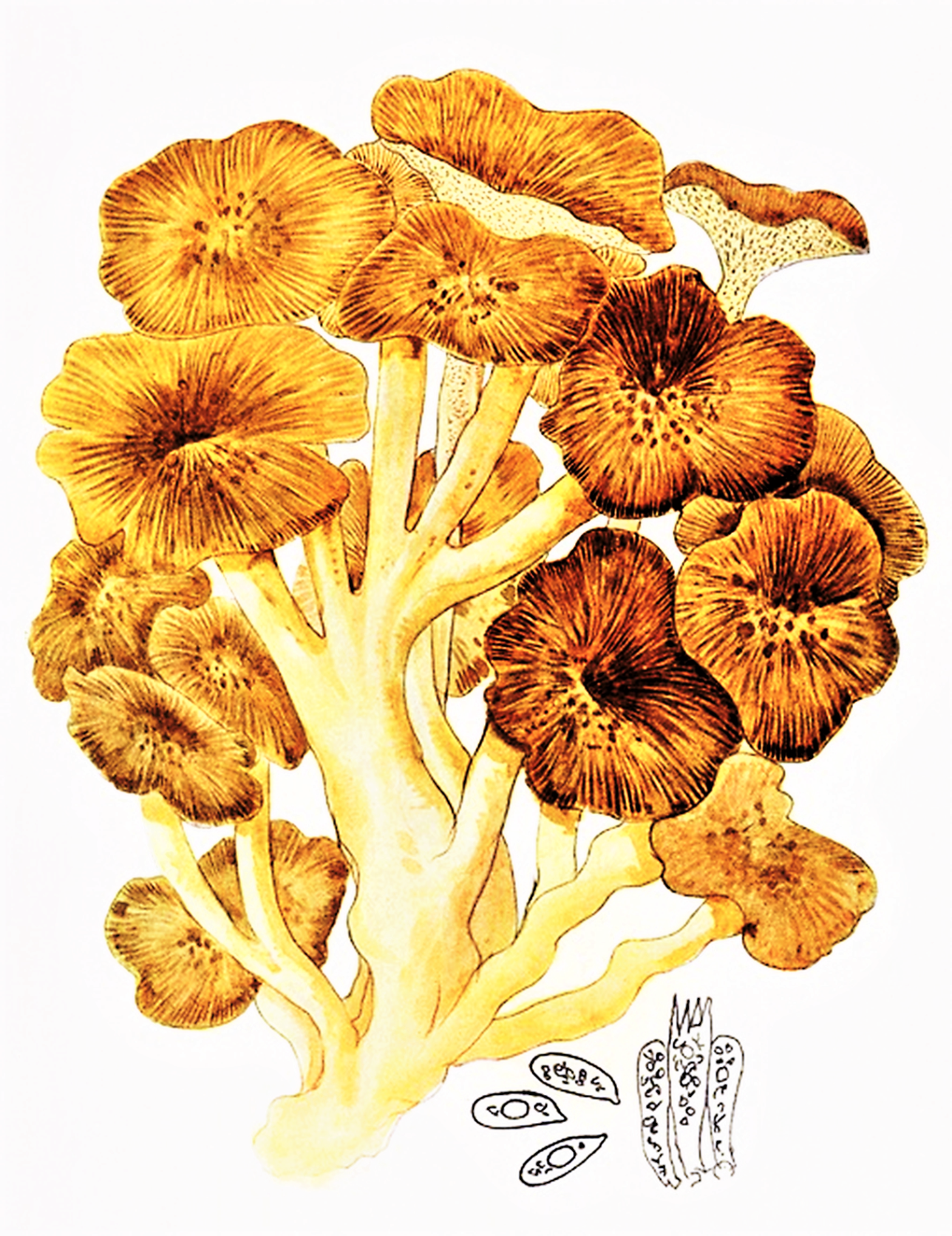 Recognition –
Polyporus umbellatus is a mushroom composed of numerous hats (sometimes several hundreds), with a diameter between 1 and 4 cm, deeply umbilicated, light brown in color that form the ends of a robust and branched fruiting body.
The compound mushroom can reach a diameter of up to 40 cm. Some specimens can reach considerable dimensions and a total weight of several kg.
The pores are tight and white.
The stem is whitish gray in color and originates from a strong tuber-like nodule that is underground.
The pulp is a little fibrous, white in color, rather soft when young, although it hardens with age. The smell is similar to flour and the taste is pleasant and fungal.

Cultivation –
Polyporus umbellatus is a saprophytic and parasitic fungus that grows mainly on chestnut roots but also on beech, oak and maple trees.
However, it is a mushroom that is cultivated in some areas.

Customs and Traditions –
Polyporus umbellatus is a mushroom known in China as Zhu Ling, where Zhu means pig and Ling mushroom, referring to its appearance similar to pig droppings.
In ancient traditional Chinese medicine (TCM) it exploited its natural diuretic properties to treat pathologies resulting from humidity-stagnation and in general for urological problems. In TCM it has been used for over 2500 years, from 206 BC. to 220 AD, originally described in the treatise of Materia Medica “Shen Nong Ben Cao Jing”, as a valid remedy with diuretic action, useful in case of edema and difficulty in urination, subsequently maintained in the oriental tradition and described in other important Materie Mediche, such as the Shang Han Lun, up to the more modern “Chinese Materia Medica” of 1999 (Zhong Hua Ben Cao).
Today, after numerous scientific studies, the properties of this mushroom are exploited for its marked tropism for the lymphatic system, because it increases the production of urine and stimulates the excretion of sodium and chlorine. This fungus helps to reduce water retention and lymphatic stasis by reducing swelling, edema and pain in the lower limbs, thus favoring the reduction of “lymphatic stasis” (stagnant liquids).
The composition of this mushroom includes numerous bioactive substances such as ergone which has anti-aldosteronic diuretic effects and promotes the increase in urinary volume in states of water retention or in cases of high water reabsorption. Among the other molecules with diuretic action isolated from the fungus there is also ergosterol, a precursor of Vitamin D.
This mushroom also contains:
– alpha-hydroxy-tetra-eicosanoic acid, biotin, as well as various polysaccharides and polypeptides and is also rich in minerals such as calcium, potassium and iron, but sodium and trace elements such as manganese, copper and zinc are also present.
Polyporus umbellatus may contain bioactive compounds with immunostimulating, antitumor, anti-inflammatory and hepatoprotective properties.
In addition to these substances we also find proteins, fats, carbohydrates and vegetable fibers; substances that promote proper digestion of food and also act as prebiotics for the intestinal flora. In addition to its diuretic action, this medicinal mushroom has an antihypertensive action, regulating blood pressure, has a renal and bladder prevention action, in particular for the prevention and treatment of urological stones (renal and bladder lithiasis – renella) and for prevent and treat nephritis and pyelonephritis in the upper urinary tract.
Polyporus umbellatus also has an antimicrobial action on the genitourinary tract: on the one hand, it burns the bladder mucous membranes, on the other, its immune-boosting action makes it possible to recover from infectious situations and above all to prevent them.
At the level of the lower urinary tract it is used as maintenance in the prevention of bacterial cystitis, as well as in the resolution of interstitial cystitis characterized by chronic non-infectious inflammation. Its inflammatory control action at the bladder level means that it is also used in the therapeutic path with bladder instillations of drugs that are carried out to slow the course of bladder cancer, controlling symptoms such as fever and induced cystitis. Finally, this medicinal mushroom has an anti-aging action, helps preserve collagen reserves, regulating the presence of free radicals and promotes hair growth. An in vitro study of hair growth in human scalps showed that low doses of the fungus (1.28 and 6.4 μg / ml) significantly stimulated growth, while high doses (4 and 20 mg / ml) inhibited it (Sun et al, 2005).
As for the contraindications, no particular contraindications are reported even if in TCM its prolonged use is not recommended in subjects suffering from renal weakness and lack of fluids, since by promoting the drainage action on the kidneys, it could put these organs in energy deficit. In these cases it would be important not to take the mushroom unless under medical supervision.

Preparation Method –
Polyporus umbellatus is an edible mushroom, even better than Grifola frondosa; it is considered a delicacy if still young, as it is easily altered giving off a bad smell.
From a medicinal point of view, Polyporus umbellatus can always be used, but in particular in spring it helps the body in its entirety during the change of season, favoring the elimination of toxins accumulated in the colder seasons, improving energy and health in general.