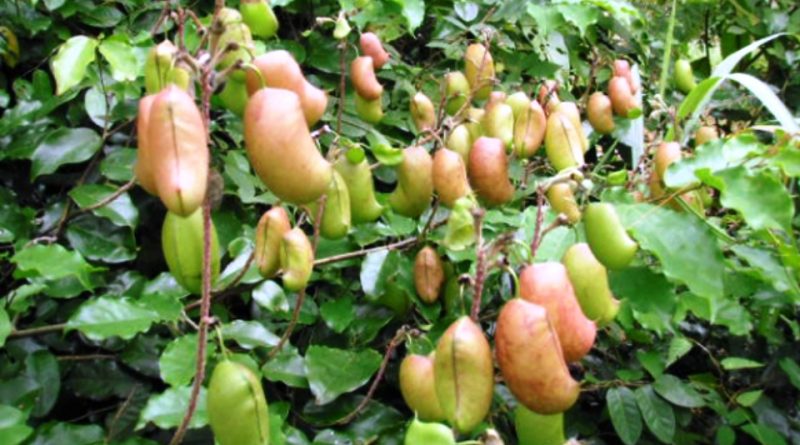 Etymology –
The term Griffonia of the genus Griffonia was dedicated by Henri Baillon in honor of his friend and medical colleague Marie-Théophile Griffon du Bellay, explorer from Gabon, pioneer in the study of sleeping sickness and also of the entheogen of the African plant Iboga, source of the ibogaine alkaloid.
The specific epithet simplicifolia comes from simplex, simple -plicis, single and from folium leaf: with simple, undivided leaves.

Geographic Distribution and Habitat –
Griffonia simplicifolia is a plant native to tropical western Africa, present from Liberia to Nigeria, Gabon, Congo, widespread mainly in the humid tropical areas of Africa.
Its habitat is that of the savannah meadows, coastal plains on termite mounds; scrub thickets; climbing species in secondary and gallery forests. 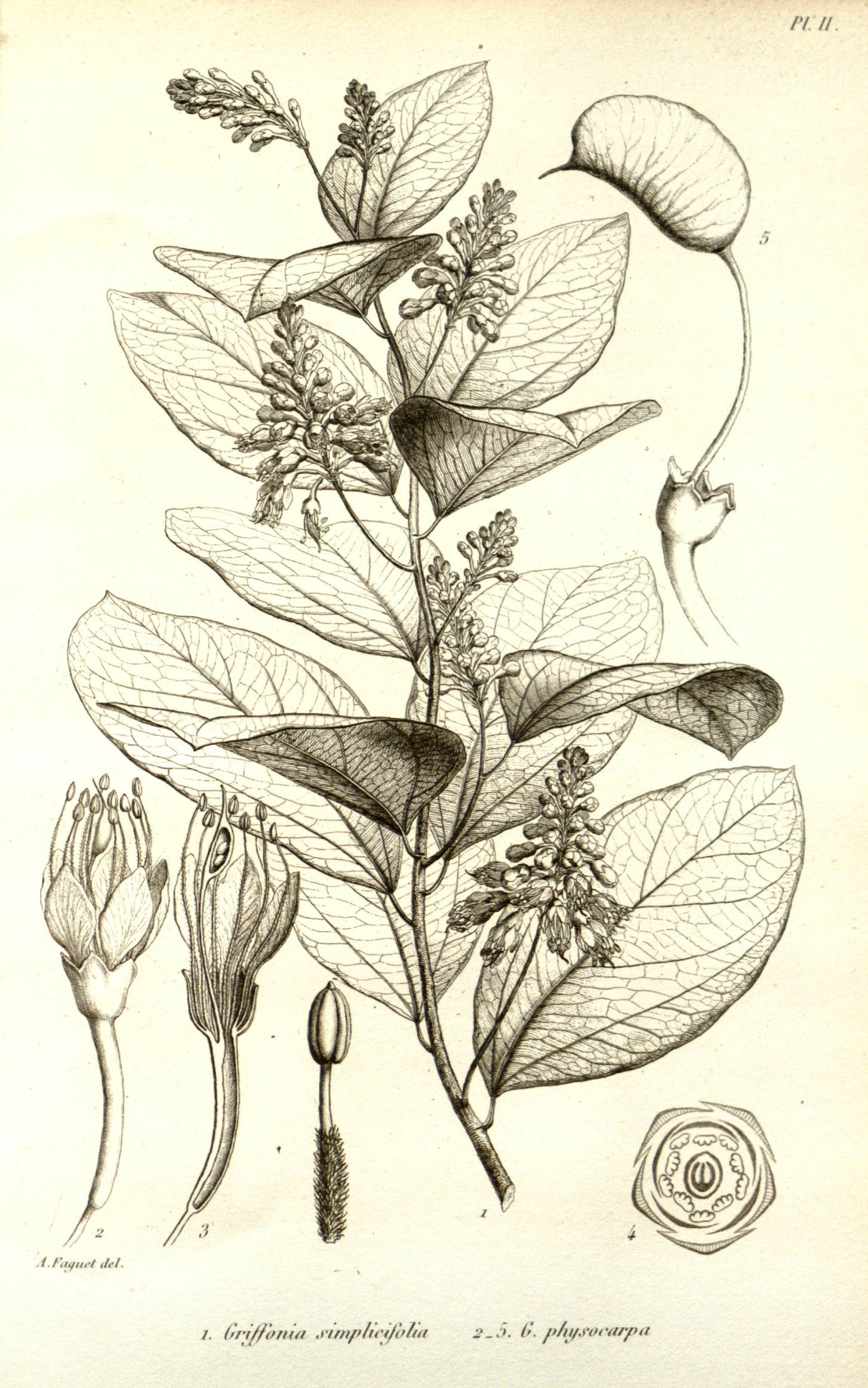 Description –
Griffonia simplicifolia is a shrubby and climbing plant that can reach 3 meters in height and with short and strong woody tendrils.
The flowers are greenish in color.
The fruits are pods containing the characteristic disc-shaped seeds with a color ranging from brown to black.

Cultivation –
Griffonia simplicifolia is a shrubby plant whose seeds are collected in nature and are sold internationally in large quantities.
Seed propagation has yielded poor results and several seed treatments do not improve germination, although fungicidal seed treatment has yielded some results.
The plant can be propagated vegetatively even if the use of cuttings has not been successful.
This plant, even if it is a legume, does not seem to have a symbiotic relationship with soil bacteria, so it does not fix atmospheric nitrogen.

Customs and Traditions –
Griffonia simplicifolia is a plant with many uses and with a wide range of medicinal uses, some minor edible uses and various various uses.
The seeds are a commercial source of 5-HTP, a serotonin precursor widely used in the treatment of depression and other medical conditions.
In humans, 5-HTP increases the synthesis of serotonin in the central nervous system and has been shown to be effective in the treatment of a wide variety of conditions, including, besides depression, fibromyalgia, obesity, chronic headache and insomnia.
In addition, 5-HTP is poisonous to some insects, namely caterpillars (such as Callosobruchus maculatus).
Griffonia simplicifolia extract is marketed pure as a mild antidepressant and as a slimming agent, as well as as a sleep aid in formulation with other remedies such as valerian extract and / or melatonin.
The 5-HTP contained in the Griffonia simplicifolia plant is also used in the production of food supplements, sometimes containing among the ingredients vitamin D and B vitamins, which strengthen the properties described above.
There are numerous lecithins in the seeds. One of these is of the acetylglucosamine group, commonly found in Poaceae and Solanaceae, but rare in Fabaceae. Some lecithins have insecticidal properties.
The leaves of this plant contain a volatile oil and coumarins.
The lithospermoside cyanoglucoside, which is the active ingredient against sickle cell anemia, was isolated from the roots.
Isolectin B4, isolated from Griffonia simplicifolia, is used as a marker of small primary sensory neurons in neurological research.
Among other uses, it should be remembered that the leaves are placed in chicken pens to kill lice.
The roots are chewed and dried to produce a white powder which is used by women to dust the face.
A black dye is obtained from the leaves and the stems are used to make baskets and cages.
The stems are also beaten to form fibers that act as chewing sponges, a popular means of cleaning teeth in Ghana.
The stems and roots are used as chewing sticks to clean the teeth and maintain gum health and oral hygiene.
The pods are transformed into whistles and toy spoons.
The wood is hard enough. It can be folded and used to make walking sticks.
Griffonia simplicifolia also has a legume lectin called GS Isolectin B4, which binds to the alpha-D-galactosyl residues of polysaccharides and glycoproteins. This supplement is often administered by silk growers to achieve stronger silk.
From the ecological point of view, however, it is reported that even if Griffonia simplicifolia is currently a common plant, the high commercial value of the seeds constitutes a serious threat. Destructive harvesting combined with high grazing pressure could contribute to population reduction.

Preparation Method –
The African bean is a plant with many uses, both pharmaceutical and food. Among the food uses are mentioned:
– the leaves are used in the production of palm wine and give the wine a bitter taste;
– the sap oozing from the cut stems can be drunk as a thirst quencher.
Regarding medicinal uses:
– the pulped bark is applied to syphilitic sores;
– a decoction of the leaves is used as an emetic, cough medicine and as an aphrodisiac; L
– the sap of the leaves is drunk or applied as an enema to treat kidney problems;
– the sap of the leaves is used as eye drops to treat inflamed eyes;
– a paste made from the leaves is applied to burns;
– a decoction of stems and leaves is taken as a purgative to treat constipation and is used externally as an antiseptic wash to treat suppurating wounds;
– it is claimed that chewing the stems produces an aphrodisiac effect;
– the stems and bark of the stem are transformed into a paste that is applied to the rotting teeth; powdered twig bark, combined with lemon juice and chilli, is applied to scarifications to treat intercostal pain;
– a powdered root extract has been used to treat sickle cell anemia.