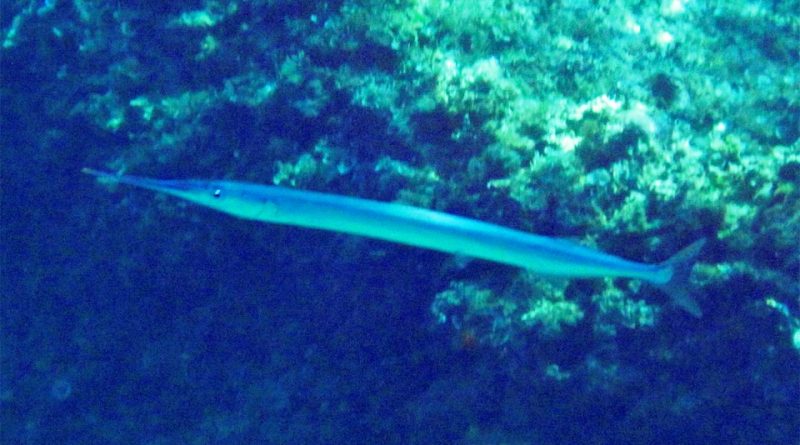 Geographic Distribution and Habitat –
Garfish is a fish commonly found in the Mediterranean Sea and the eastern Atlantic, in coastal areas around the Canary Islands, Azores, Madeira and Cape Verde, as well as in the Black and Azov Seas.

Biology –
The reproductive cycle begins with the deposition of the females of numerous eggs of 3 mm in diameter, covered with filaments with which they attach themselves to each other or to the walls of the algae.
The reproduction period takes place from February to May.
The newly hatched larvae, 9 mm long, do not yet have the characteristic elongated snout that they will acquire as adults.

Ecological Role –
The garfish is a gregarious fish more at night than during the day and has pelagic habits, but it comes remarkably close to the coast.
This fish is attracted by light sources and can go up the brackish waters and happen in the coastal lagoons.
This fish feeds on larval and juvenile stages of small fish, mainly sardines and anchovies and other planktonic animal organisms.
Garfish is widely fished both by sport fishermen (especially with the trolling and spinning technique) and by professionals with purse seines.
It is also widely used by sport fishermen as live bait for catching bluefish, mainly in the area that goes from the north of Tuscany to the south of Lazio.
The tapered shape, the whiteness and the quality of the meat added to the rapidity of movement make the garfish one of the predator’s favorite prey, like the mullet. The garfish is fished close to the shore with surfcasting or spinning rods of very low capacity, especially suitable for capturing live bait such as garfish (or the well-known starfish), after which it is baited on the hook and the line. it is brought to 30-40 meters from the shore.
The meats are good, especially fried, although the green color of the bones may impress some.
It is occasionally caught in the purse seine for sardines and anchovies. At night it is fished with a harpoon or a net under the light of a lampara. You can also fish with rods, from the shore or on a boat, with a surface hook and earthworms as bait.
This fish is eaten boiled or fried or you can get rolls to cook on the grill.
Among the related species we note the other species of the genus Belone present in the Mediterranean which is Belone svetovidovi (Collette & Parin, 1970) known in Italian as “Svetovidov’s garfish” present in some sectors of the north-eastern Atlantic Ocean and in the Mediterranean Sea. It is extremely similar to B. belone and can only be distinguished by looking at the number of teeth on the jaws. It is in fact almost always confused with the common garfish.