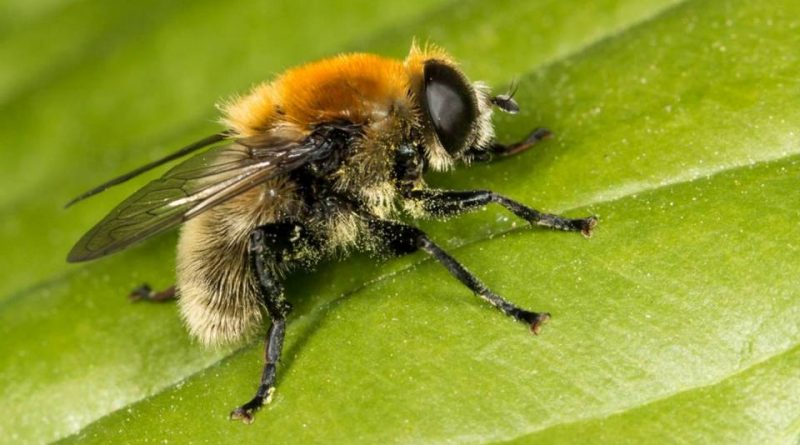 The Narcissus bulb fly (Merodon equestris Fabricius, 1794) is an insect belonging to the Syrphidae family.

Geographic Distribution and Habitat –
The Narcissus bulb fly is an olarctic species found from Europe to Russia and Japan and present in America, from British Columbia in the south to California.
This species frequents the lowest vegetation and lives close to some plants such as Narcissus and Iris.
The habitat of this species is that of open areas in the deciduous forest up to the subalpine area but significantly synanthropic, present in suburban parks and gardens and on horticultural land.

Morphology –
Merodon equestris is an insect that like other hoverflies tends to resemble some pollinators. It is distinguished from these by the very strong posterior femurs, which carry a large triangular protrusion on the underside near the tip.
This insect is recognized for having a small head. The tergiti are black, without spots. The chest and abdomen are hidden by dense, long, erect hair of varying color. Tibia 3 of the male has 2 spurs at the apex.
The larvae are light brown in color, slightly curved and with clearly visible segments.

Attitude and Life Cycle –
The adult of this insect can be seen flying low from April to July with a fast zig-zag flight, among the ground vegetation and frequently settles on the bare ground.
The female lays the eggs at the base of the leaves in spring and after a couple of weeks the larvae are born that migrate towards the bulb and live and grow at the expense of its pulp until the following spring when, mature, they leave the bulb to pupate.

Ecological Role –
The adult of Merodon equestris feeds on pollen and nectar. It visits a large variety of flowers to feed on nectar, while the larvae feed internally in the tissues of the Liliaceae bulbs, and are considered a horticultural pest, particularly Narcissus.
The infiltration of the larvae into the bulbs facilitates the formation of mold and rot inside them.
As for the fight it is advisable, if bulbs are produced on a large scale, to apply the treatment in a hot bath (at 45 ° C for about an hour) after harvesting, a treatment that is also recommended for those who intend to grow liliaceae. in an amateur way.