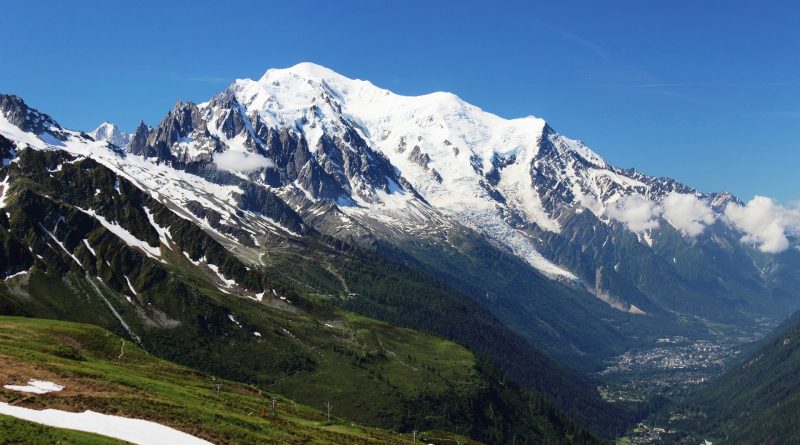 Mont Blanc, with its 4,808.72 m of altitude, is the highest mountain in the Alps, Italy, France and Europe, sharing together with Mount Elbrus in the Caucasus a place among the so-called Seven Peaks of the Planet.
Mont Blanc is located in the North-Western Alps sector, along the Alpine section of the Graian Alps, on the watershed line between the Aosta Valley (Val Veny and Val Ferret in Italy) and Haute-Savoie (Arve Valley in France), in the municipalities of Courmayeur and Chamonix; gives its name to the massif of the same name, belonging to the subsection of the Mont Blanc Alps.
This massif is mainly of granite nature, bristling with peaks and ridges, carved by deep valleys in which numerous glaciers flow, is considered a mountain of great appeal for international mountaineering and, from the point of view of mountaineering historiography, the birth of mountaineering itself coincides with the date of his first ascent: 8 August 1786.
The determination of the height of Mont Blanc has undergone various fluctuations over the years due to both instrumental issues and variations due to the winds that accumulate snow on the top, consequently determining its height. If there are fewer windy days during the year than in the previous year, as a result, less snow will accumulate, affecting the height.
Be that as it may, Mont Blanc is the highest mountain in the entire Alpine chain and also considered the highest in Europe. Although the most authoritative sources do not consider the Caucasus as the eastern geographical limit of the continent, however, those located in Russian and Georgian territory are sometimes mentioned as the highest peaks in Europe, such as Elbrus which culminates at 5,642 m, Dykh Tau with 5,203 m, the Shkhara at 5,200 m and the Kazbek 5,047 m.

Geology –
The mountain system of the Alps was generated during the Tertiary Era thanks to the thrust of the African and Asian tectonic plates, through a process of vertical cant. About 300 million years ago, during the Hercynian orogeny, a large granite intrusion formed the basic structure of the current Mont Blanc massif. This action is still in progress, so much so that modern survey methods confirm that the elevation of the Alps continues incessantly and still overcomes the effects of erosion. Around the granite nucleus (protogynous) metamorphic rocks emerged (gneiss, mica schists and calcescists).
The most frequent rocks found are:
– the granites, which stand out in the central part of the Massif for the spire ridges and the acute shapes of the reliefs. Although very hard, this rock does not resist the effects of erosion caused by ice;
– the metamorphic rocks, which surround the granites. These rocks contain the same crystal families as granite, but their resistance to erosion is minimal and they have more slender shapes than the others;
– sedimentary rocks, which are generally grouped into two large families, namely basic rocks (limestone, dolomite, calcescists, Carniole), and acid rocks (stoneware, clayey schists, quartzite).

Climate –
From a climatic point of view, Mont Blanc, with its distance of 240 km from the Mediterranean Sea and 620 km from the Atlantic Ocean, has a semi-continental climate, conditioned by the humid winds coming from the Atlantic. Once they reach the massif, they tend to cool down along the watershed and on the heads of the valleys, causing rainfall conditions at low altitudes, with a maximum of rainfall in July and August and a minimum in January and February, with sudden changes possible.
Above about 3,000 m, autumn and spring precipitation falls essentially in the form of snow, rarely as icy rain, and is more frequent in summer than in winter due to the decreased humidity of the cold air in winter.
Reached the altitude of 3,800 m, the precipitations always take on the snowy form and guarantee a strong accumulation of snow to the glaciers that surround the mountain. These precipitations often turn into real snow storms, especially on the highest altitudes and on the top where during these storms the accumulations of fresh snow reach up to 4 meters thick. The number of days of snowfall above 3500 m can be estimated between 150 and 160, with an intensity of precipitation on the summit of about 20 cm of snow (corresponding to about 20 mm of water) per day.
Temperatures then rise between 15 June and 15 July, at the turn of the summer solstice, a phenomenon that follows a sort of thaw, with maximum temperatures reaching 3 ° C. The action of the sun melts the surface snow creating water that filters into the lower layers and then freezes quickly.
Winds also contribute to characterize the climate of Mont Blanc. In fact, if on the one hand the dry ones in winter sweep away the snow, on the other hand the damp spring winds, characterized by abundant rainfall, bring large quantities of it.
These winds, at the top, can reach 150 km / h and the temperature – 40 ° C. Disturbances caused by the foehn, a hot wind that blows from Val Ferret, are also frequent, and in overcoming the buttresses of the Valle d’Aosta side it loses moisture causing heavy snow at high altitude, to descend towards the Arve valley even warmer, favoring sunny days. . When hiking on the mountain, the wind strengthens the feeling of cold and the perceived temperature is lower than the actual one in the surrounding environment (Windchill effect).

Flora –
On Mont Blanc, especially at higher altitudes, the slopes are steep and smoothed by glaciers, with predominantly acid soils, consequently the environment is rather poor in flora. Furthermore, the snows normally persist above 2,800 m of altitude. On the west side the first slopes are located at 3,500 m while on the opposite side they start from the Valle d’Aosta valley floor. Given the extreme conditions, the life of plant and animal species is very limited, but among the crevasses or sheltered between the granite walls, some plant species manage to survive up to 4,000 m, such as the glacier buttercup. At those altitudes there are also mosses and lichens. At lower altitudes the soils often originate from calcescists, or from limestone rocks and the living conditions for the plants are less extreme, while remaining characteristic of a severe mountain environment.
Coniferous forests prevail on the slopes of Mont Blanc, populated mainly by spruce and larch, but locally also by Swiss pine and hook pine. In the alpine prairie, on the other hand, many species of flowers can be observed including the showy yellow inflorescences of the Hugueninia tanacetifolia, an endemic plant of the western sector of the Alps, and the Anemone narcissiflora, and again the gentian (Gentiana clusii), the well-known edelweiss , the rare yellow bellflower. In the undergrowth you can find the Venus slipper orchid (Cypripedium calceolus), the Dactylorhiza sambucina orchid, the martagon lily (Lilium martagon), the columbine, the viola (Viola calcarata), and the common blue gentianella (Gentiana verna and Gentiana acaulis). The presence of the hybrid between the purple gentian (Gentiana purpurea) and the dotted gentian (Gentiana punctata) is interesting. Climbing higher, you will encounter shrubs such as rhododendron (Rhododendron ferrugineum) and blueberry. In the heart of the massif, at 2,175 m a.s.l. there is the highest botanical garden in Europe: the Saussurea Alpine Garden, which collects and enhances the natural species of the characteristic flora of Mont Blanc.

Fauna –
Even the fauna on Mont Blanc is affected by some adverse climatic conditions that disadvantage some animal species such as mammals; these, in fact, cannot survive in such difficult conditions, contrary to certain species of birds.
However, going down to lower altitudes, the fauna begins to have more species and more populous.
Furthermore, the proximity of two National Parks (Gran Paradiso and Vanoise) has contributed to the maintenance and diffusion of some species that had been reduced to a few specimens.
Among the mammals we remember the alpine chamois, which frequents both the prairie of the alpine plain and the woods of the subalpine plain, where it is also possible to meet two large herbivores such as red deer and roe deer. The large stony ground of the Alpine plain sees the presence of the ibex, the golden eagle and its main source of food: the marmot. An animal that is encountered both in the high altitude prairies and in the valley floor is the fox.
As for the avian species in the area of ​​the massif, 184 species of birds have been registered and about 110 of these are nesting.
Among the birds, in addition to the eagle, among the birds of prey you can spot the buzzard, the goshawk, the kestrel.
Sometimes you can observe the circular flight of the lamb vulture, the bearded vulture extinct over the Alps at the beginning of the 20th century and recently reintroduced. There are also black grouse, black grouse (in the Savoy and Valais, but no longer in the Aosta Valley) and the imperial crow. On the other hand, there are few species of reptiles and they are still found at relatively low altitudes, among these the collared natrice, while where the ground is stony and sunny you can meet the asp.