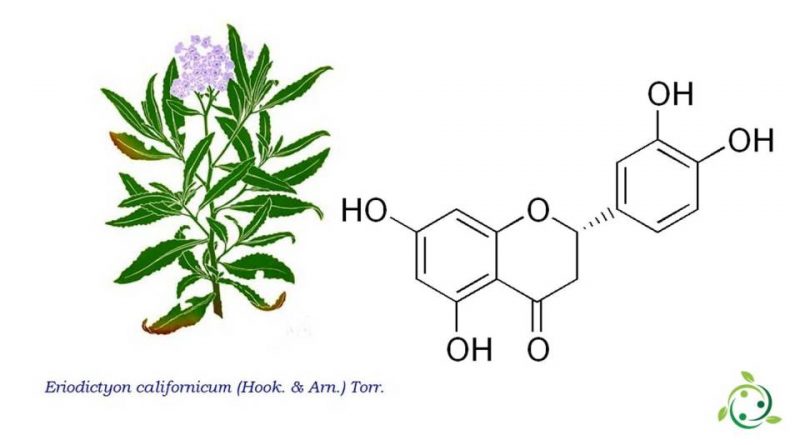 Eriodictyol, whose term in the official IUPAC nomenclature is: (2S) -2- (3,4-Dihydroxyphenyl) -5,7-dihydroxy-4-chromanone is a flavone of natural origin.
This substance has a brute or molecular formula: C15H12O6.
Eriodictyol is a flavanone found in holy grass (Eriodictyon californicum (Hook. & Arn.) Torr.), A plant native to North America where it is found in central northern California and Oregon, growing in several types of habitats, including chaparral and forest and with antiseptic, expectorant, febrifugal, general tonic, anti-inflammatory properties of the respiratory tract.
Eriodictyol is one of the four flavanones identified in this plant and having taste-modifying properties, the other three being homoeryiodicthiol, its sodium salt and sterubin.
Eriodictyol is a flavone that has the ability to mask the bitter taste.
This substance has also been found in the twigs of Milletia (Millettia duchesnei De Wild.), In an Eupatorium (Eupatorium arnottianum Griseb.) And in its glycosides, including eriocitrin, in the lemon (Citrus limon (L.) Osbeck ) and in the dog rose (Rosa canina L., 1753).