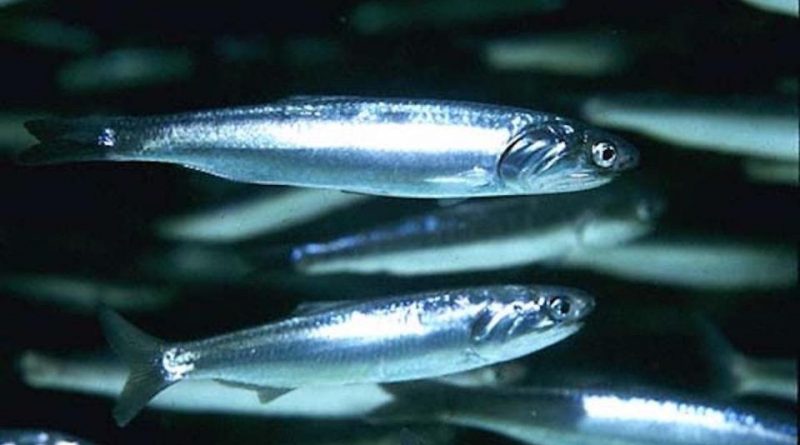 The European anchovy (Engraulis encrasicolus Linnaeus, 1758) is a marine fish belonging to the Engraulidae family.

Geographic Distribution and Habitat –
The European anchovy is a fish found in many seas and is abundant in the Mediterranean and in the past also in the Black and Azov seas. They are regularly caught on the coasts of Bulgaria, Croatia, France, Georgia, Greece, Italy, Albania, Romania, Russia, Spain, Turkey and Ukraine. The species is also present along the Atlantic coast of Europe south of Norway up to South Africa.
It is a typical pelagic fish that can also be found at a great distance from the coasts, which it approaches in May-June for reproduction. Usually in the hot season it is not encountered at depths greater than 50 meters; the maximum recorded depth is 400 meters. In winter it frequents deeper waters, around 100-180 meters in the Mediterranean. It is a moderately euryhaline species, tolerates brackish waters and sometimes penetrates into mouths and lagoons. In the brackish lakes of Ganzirri and Torre Faro in the municipality of Messina there is a sedentary population, in the past considered as a subspecies (Engraulis encrasicolus russoi). 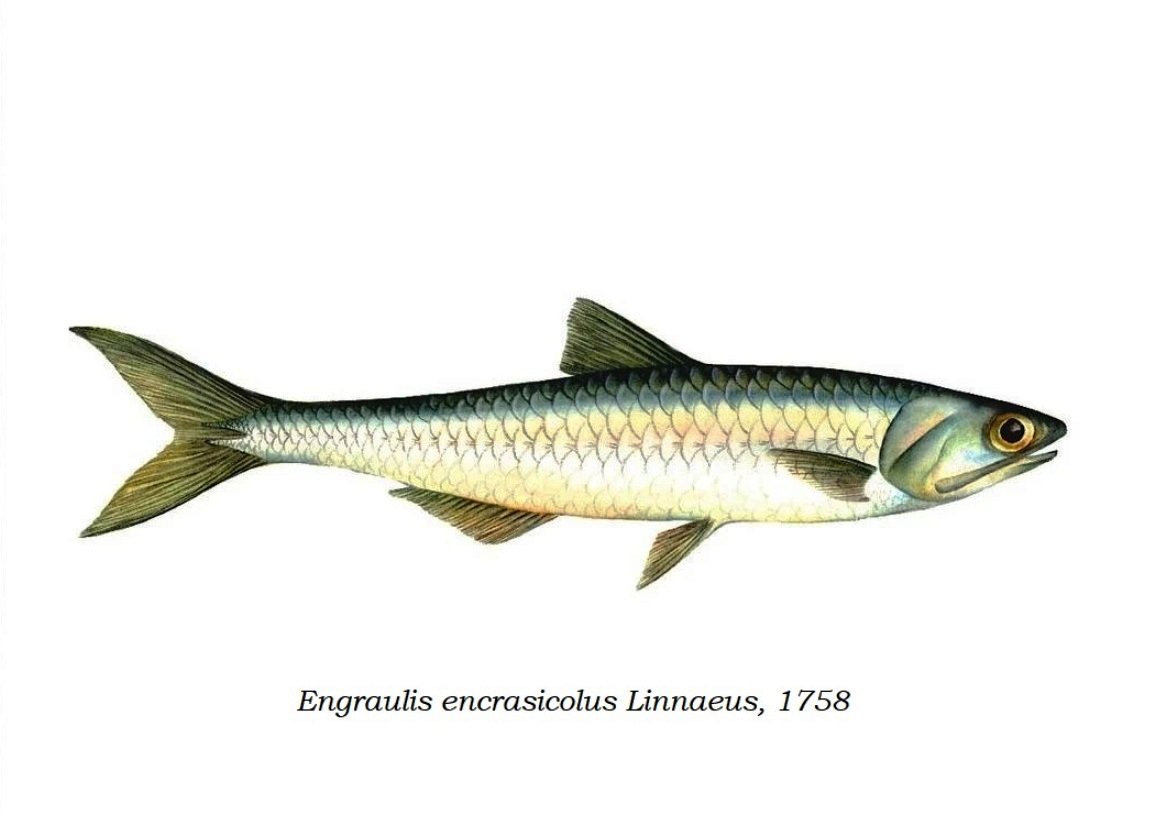 Description –
Engraulis encrasicolus is recognized for its tapered body, more slender than the sardine, not very compressed, with the ventral surface not keeled, with a maximum length of 20 cm.
The scales are medium and large in size and, like those of the sardine, very deciduous.
The head has a fairly large eye, covered with a dermal film.
The nostrils are located very close together and the rear is larger.
The mouth is very large and the lower jaw is prominent. The teeth are very fine and sharp and they also exist on the palatine and ploughshare.
It has only one dorsal fin. The caudal is forked and shorter than the head and has 4 oblong scales on the upper lobe and 3 on the lower one.
The dorsal colouration is blue-greenish when the fish is alive, from dead the back becomes dark indigo blue. The belly is silver.

Biology –
For the European anchovy, spawning occurs in coastal waters in the period between April and November, with a peak in June and July.
The eggs are laid in numbers up to 40,000 and are pelagic. The eggs hatch within 2 days, and the larvae just 2 mm long, known together with those of the sardines as gianchetti or whitebait, immediately aggregate in schools.
This fish reaches sexual maturity at one year and can live up to 5 years.

Ecological Role –
Engraulis encrasicolus is a gregarious species throughout its life and tends to form very numerous schools, often mixed with other species (for example the sardine) but made up of specimens of similar size (a phenomenon known as gregarious size). This fish performs both seasonal migrations, as in winter it moves to deep waters.
Its diet is diurnal and based on zooplankton, the main preys are crustaceans, copepods and larval stages of molluscs. In winter it also feeds on benthic organisms.
Anchovy is one of the most important fish species for the Mediterranean Sea and the warm European temperate Atlantic Ocean. Its capture takes place with various methods (trawl nets, gillnets, etc.), but mainly with a special purse seine known as ciànciolo, in which schools of anchovies and other small pelagic fish are attracted to light sources ( lampàre). In the Mediterranean area the most productive basin is the Adriatic Sea with 80% of the Italian landed. The minimum size for marketing, according to the EU directive is 9 cm.
This fish is eaten fresh but is subjected to processing for conservation: in salt, in oil, as anchovy paste, etc. ..
Unfortunately, as for other species, it is a fish, especially in the Adriatic Sea, object of overfishing. It is estimated that the Chioggia fleet alone in summer discards between 6 and 9 tons of dead anchovies (and sardines) per day, for each pair of ships, due to the unprofitable market price. Fish stocks have shrunk significantly over the past few decades.
The IUCN believes that the fishery is abundant and fully exploited and needs close monitoring. The highly international species does not have a concerted management plan.
Local populations fluctuate and have shown great variation in the past. These fluctuations are not well understood. Some past declines have been due to environmental problems, local overfishing and invasive species.
Mnemiopsis leidyi is an invasive species that feeds on European anchovy eggs. Some past fluctuations are likely due to climate change.