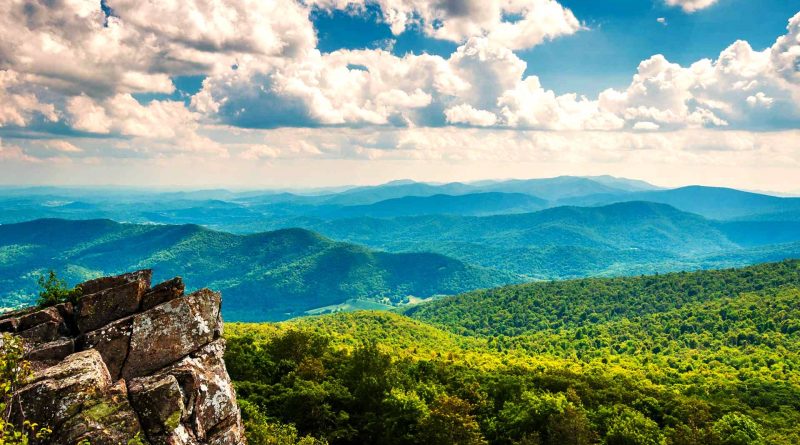 Shenandoah National Park, whose WDPA code is: 989 is a national park located in Virginia, in the United States of America.
This park has a land area of ​​805 km² and was established in 1935.
This area of ​​Virginia boasts traces of human beings that date back to around 8,000-9,000 years ago. Native Americans visited this area to hunt, gather food, basic materials for stone tools, and trade. In the 1700s, European hunters and trappers explored the mountains of the Blue Ridge and the Shenandoah Valley. Soon after 1750, European settlers moved to the lower cavities near springs and streams. Over the next century and a half, hundreds of families worked the land, planting orchards and crops, building farms and mills, using the mountains for logging and mining.

Geography –
Shenandoah National Park is located in the other part of Virginia. In this area there are two reliefs which are the Stony Man and the Hawksbill which exceed 4,000 feet. The diversity of elevations, slopes and aspects, rocks and soils, rainfall and latitude create a unique habitat mix.
Most of Shenandoah’s landscape is covered with forests and the particular hygrometric condition creates a faint haze that gives the Blue Ridge its name.
The current geological activity in Shenandoah National Park is the result of natural and man-made forces acting on the surrounding mountains and valleys. Freezing and thawing can cause landslides and chipping from rock walls. Heavy thunderstorms and rain events can cause flooding and associated erosion. In extreme cases, large amounts of rain can cause landslides. The result is an ever-changing landscape.
The Appalachian rocks form the foundation upon which the Shenandoah Blue Ridge stands. Over a billion years it helped form a dramatic topography, creating the rounded, boulder-strewn peaks of Old Rag Mountain, Hogback Mountain, and Marys Rock.
Greenstone’s 570-million-year-old lava flows now form the sheer, jagged cliffs of Stony Man, Hawksbill, and many other peaks within the park. These streams, stacked on top of each other, create a stair-like topography of sheer cliffs and flat benches that produce many of Shenandoah’s most distinctive landscapes. Most of the park’s major waterfalls are found where streams run through these layers of lava and plunge into steep-walled canyons.
The metasedimentary rocks of Chilhowee, from the shores of an ocean that precedes the Atlantic, now create the steep slopes and rugged topography of the park’s unique southern district. Merged together and altered by the heat and pressure of mountain construction, the white quartzites form the great cliffs and boulder fields of Rocky Mountain, Calvary Rocks and Blackrock South.

Climate –
The climate of Shenandoah National Park can vary greatly depending on the location. The mountains are usually 10 degrees cooler than the valley below. Winters can be harsh with snow and ice and summers can be hot and humid with sudden showers.
The Atlantic Ocean, and particularly the Gulf Stream, plays an important role in Virginia’s rainfall regime. Winter storms generally chase each other from west to east and near the east coast move northeast parallel to the coast and the Gulf Stream. This northeastern shift stems in part from the tendency of storms to follow the boundary between cold land and the warm Gulf Stream. When sufficiently cold air enters Virginia from the west and northwest, frontal storms can bring heavy snowfall. Thunderstorms occur all year round, with highs in September and lows in February. Storms and high runoff conditions can occur year round in Shenandoah. Most locations receive 100-150cm of rainfall per year. The average annual precipitation in Big Meadows is 132 cm, of which about 94 cm is snow. Winds from south to south-west prevail, with a maximum secondary frequency from the north. Lower-elevation areas of the park experience a modified continental climate, with mild winters and hot, humid summers. The average annual temperature in the lowland area at Luray averages 12 degrees C, and the average annual precipitation is 91 cm, with about 43 cm of snow.
The higher areas of the park have moderately cold winters and relatively cool summers. The average annual temperature in Big Meadows averages around 9 ° C. The average daily maximum temperatures in July are on average about 6 ° C cooler in Big Meadows, therefore in the lowland areas of the park. Temperatures in January range from around –7 ° C to 4 ° C and in July from around 14-24 ° C. Snow and ice are common in winter, but they usually melt quickly, leaving the ground bare. Occasional severe snow or ice storms can cause considerable damage to trees within the park. 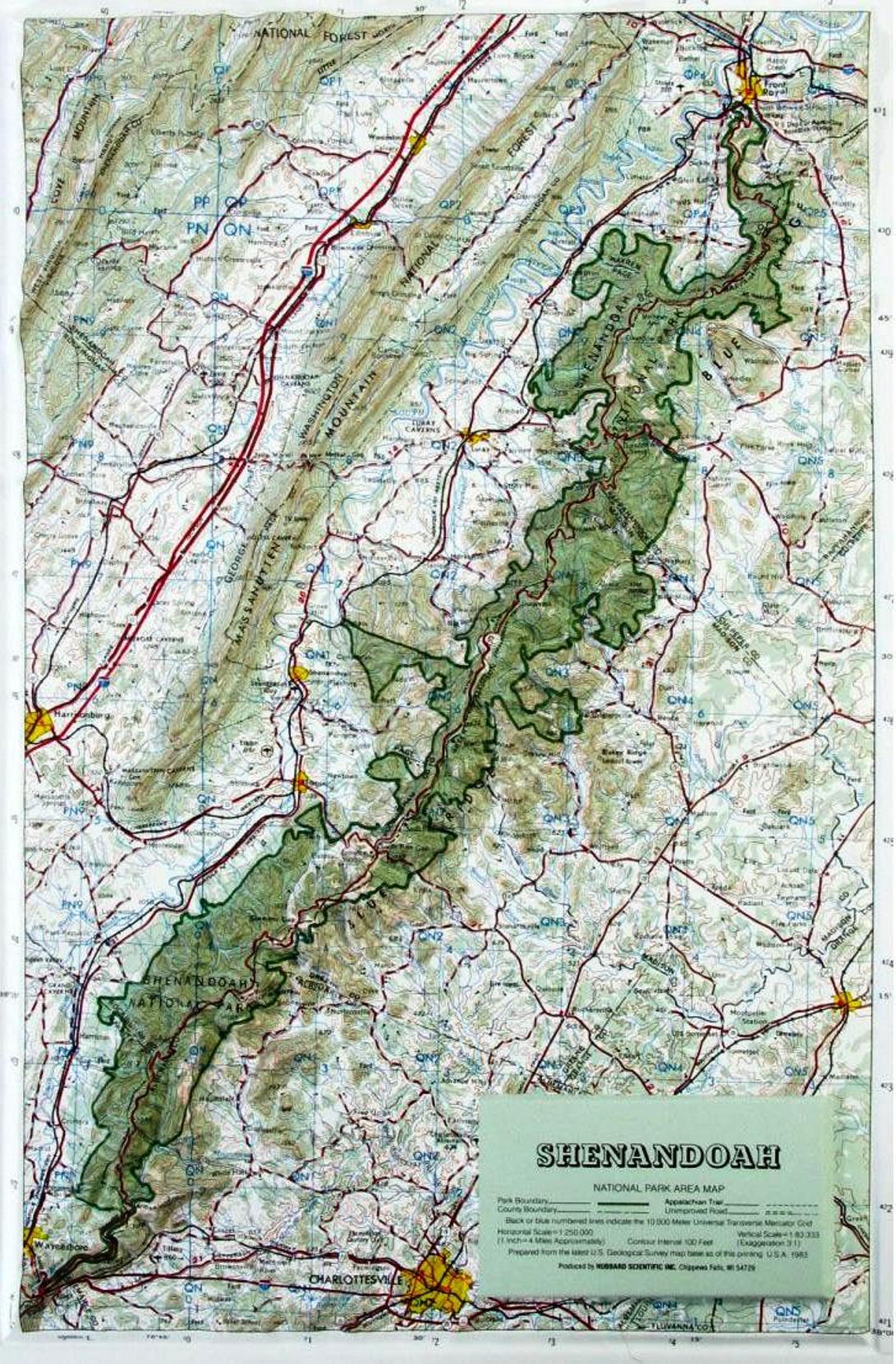 Flora –
Shenandoah is the largest fully protected area in the Middle Appalachian region and encompasses 300 square miles.
The park’s natural features include well-exposed layers of the Appalachians, diverse animal and plant populations and habitats, stopping points for migratory birds, and wooded water bodies that perpetuate numerous streams that flow from the highlands to the lowlands.
Vegetation surveys in 1940 (Berg and Moore, 1941), 1987 (Teetor, 1987) and 2009 (Young et al 2009) show dramatic changes in the forests of Shenandoah National Park over the past 750 years.
Over time, the natural succession has filled the areas of cleared and cultivated land that were present at the time of the establishment of the Park with large populations of mature wood. These forests are pristine in some areas, but in other areas they bear the marks of impact caused by natural and man-made ailments such as fires, storms and insect outbreaks and diseases that have occurred over the years
In 1940, Shenandoah was a young park, just five years after its founding. The landscape bore the unmistakable signs of nearly 200 years of settlement and human use, including logging, grazing, hunting and farming. It also bore the marks of mortality in high forests caused by late blight of American chestnut trees.
In 1940 the park was 85% wooded. Northern chestnut and red oak covered 72% of the park. The rest of the park was open land, including grasslands, cultivated fields, and old fields that had reverted to forest. Previously grazed areas were occupied by bear oaks and sea pines, poplar poplar stands were absent and broadleaf species such as maple, lime, cherry and birch trees covered only 6% of the area.
In 1987 the park was 55 years old and 95% was covered with forests. Chestnut oak and red oak coverage had decreased to 59%, bear oak stands had disappeared, and pitch pine coverage had decreased. The increase in coverage has been seen by other species. The poplar stands of yellow poplar had consolidated and now covered 16% of the park and the hardwood cover of the bay had increased to 15% throughout the park.
The 2009 forest vegetation survey revealed a park landscape that remained 95% wooded. However, the coverage of the oak and hickory dominated community had increased to 65% of the landscape and the hardwood forest cover had increased to 13%. Pests and interference with forest species such as the gypsy moth, woolly hemlock adelgida, hurricanes and ice storms, among others, have transformed 17% of the park’s vegetation communities as early or disturbed vegetation types. These include the later Tuliptree forest (6.5% of the park land) and the modified successor forest to the northeast (5.5% of the park land). In 2009, 5% of the park’s forests were so disturbed that they could not be classified as anything other than “heavily disturbed forest”.
Areas of intense disturbance today may seem unrecoverable, but through the processes of forest succession and responsible forest management, the old forest formations may someday return.
As for wetlands, little is known about the number or of these. Shenandoah National Park currently identifies wetlands using maps from the National Wetland Inventory, but several studies are underway to help refine these maps better. The areas along the banks of the stream are considered wetlands, thus greatly increasing the number of wetlands in the park. The park has several known wetlands beyond the creek banks, with Big Meadows being the most visible and studied wetland. In Big Meadows, two Mafic Fens (wetland types) contain globally rare plant communities believed to be endemic to the Park and support eight state rare plant species. The lawn also supports an abundance of mammals, birds, amphibians, reptiles and insects, some of which are not found elsewhere in the Park. A rare snake, a rare insect, and several species of salamanders and birds are among the animals that occupy the Big Meadows wetlands. Although we currently know little about all of the park’s wetlands, we can expect at least some of them to contain flora and fauna unique to wetland habitats.

Fauna –
People traveling to the Shenandoah Valley in the early 1700s reported an abundance of various animals. As European settlers colonized and cleared territories, they introduced pets and hunted; thus the original animal populations decreased. The hunt eliminated the American bison around 1798 and the elk followed in 1855. The beaver and river otter disappeared in the late 1800s. The eastern timber wolf, the eastern puma, the white-tailed deer, the turkey, the black bear and bobcats were eradicated or drastically diminished. The exact number of native species lost is unknown. In the past century, most of these species have returned through reintroduction to land elsewhere in Virginia or through natural population recovery. The designation and management of the area as a National Park provides shelter for resident and migrating animals.
Today, Shenandoah National Park is a refuge for many animals otherwise put under pressure by human activities. The Park is home to over 190 resident and transient bird species, over 50 mammal species, over 20 reptile and amphibian species, over 40 fish species, as well as an unspecified number of insects, spiders and other invertebrates. A handful of animal species are large and are more likely to be spotted. With patience, skill and a little luck, visitors can see some of the park’s thousands of other resident animals.