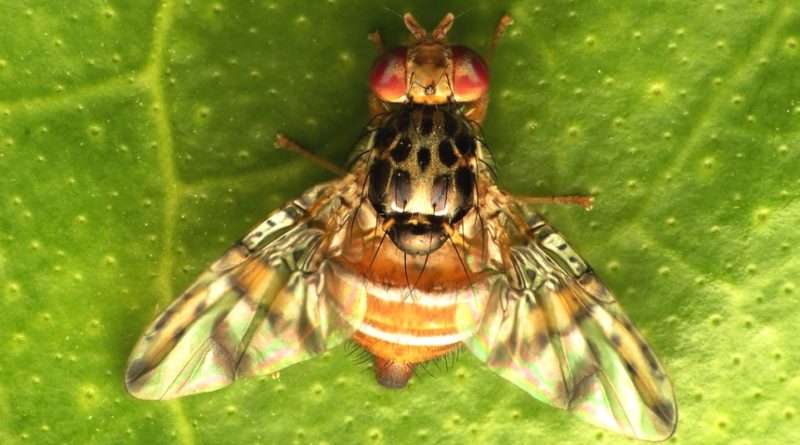 The Mediterranean fruit fly or medfly, (Ceratitis capitata Wiedemann, 1824), is an insect belonging to the Tephritidae family.

Geographic Distribution and Habitat –
Ceratitis capitata is a phytophagous insect whose larva develops as carpophagus and polyphagous within the pulp of many fruits.
It is an insect of probable origin from sub-Saharan Africa or West Africa, from which it settled in the Mediterranean basin over a century and then spread throughout the world. Currently it is in fact a cosmopolitan species, present all year round in the tropical and subtropical regions of all continents: North America, South America, Asia, Oceania. On the other hand, in temperate zones its presence is seasonal. It is also present in the southern United States (California, Texas, Florida) and in Mexico, where it disappeared in North America in the 1980s, only to reappear on several occasions in California.
Instead, it disappeared in New Zealand and Hawaii.
This fly is polyphagous and lives mainly on plants such as stone fruit, pome fruit, citrus fruit, kaki, fig, actinidia, etc.

Morphology –
Ceratisis capitata is a small 4-6 mm long fly.
It has a garment characterized by two greenish compound eyes.
The thorax is yellowish-gray in color.
The membranous wings and have characteristic ocher yellow spots.
The abdomen, rounded and pointed at the end, is yellow-orange in color, with silvery gray transverse stripes.
The larvae are whitish, carpophagous and specifically adapted to endophytic life.
The larvae are apod, elongated, sub-conical, narrow towards the head, of a white-yellowish color. The newborn larvae are less than a millimeter long and are difficult to perceive with the naked eye. The mature ones are 7-9 mm long.
The pupae derive from the moult of mature larvae and are protected inside the puparium by an elliptical capsule formed by a transformation of the exuvia of the last larval moult, of a reddish color. The puparium is 4-5 mm long. In some strains the pupari from which the females will flicker are white, those from which the males will flicker are reddish-brown.
The eggs are elongated and slightly curved and measure about 1.0 x 0.2 mm; they are bright white in color, with a protruding micro-pile area.

Attitude and Life Cycle –
In mild winter regions, Ceratisis capitata overwinters mainly at the pupal stage in the ground, a few centimeters deep. In citrus-growing areas, it also winters as an adult or as a larva in citrus fruits. Temperatures below 2 ° C for a week result in the death of the pupae. In tropical regions, generations follow one another uninterruptedly throughout the year.
In Italy the flicker of adults occurs in the month of May-June.
The female lays the eggs preferably on fruits with a high content in sugars, with a low degree of acidity and with a tender pulp. This preference means that the attacks depend on the type of fruit and the season. In southern Italy, in the height of summer, the attacks preferably target peach trees, apricots, figs and early pear varieties, while plum trees are generally avoided. In late summer the attacks also extend to other varieties of pear, apple, sometimes plum and grape, but especially prickly pear and early varieties of persimmon. In autumn the attacks continue on prickly pears and persimmon to finally move on to citrus fruits, in particular clementines and early oranges from the Navel group (Naveline).
The female, usually 4-6 eggs are laid per puncture, up to a maximum of ten. A female can also practice several stings on the same fruit, so you can also lay several dozen eggs in a single fruit. Over the course of her life, a female can lay a few hundred to a thousand eggs, so she can attack hundreds of fruits.
The first generation, resulting from the first oviposition, can be followed by 5-6 during the year; the first generations develop on the stone fruit, then, the insect passes on the pome fruit and, in the south, on the citrus fruit in the late summer-autumn generations.
These last generations are those that involve the highest density of the pest population.
In general, Ceratisis capitata also completes 6-7 generations a year, in central-southern Italy and 3-4 generations in the northern one.
The duration of the development cycle, from egg deposition to flickering, depends on the temperature and varies from a minimum of 2 weeks (at 29 ° C in the laboratory) to a maximum of 3 months (10-12 ° C). Under ordinary conditions, the duration of a summer generation is of the order of 20-30 days. Below 9 ° C biological activity stops completely.
Immediately after exiting the egg, the larvae develop inside the pulp causing it to decay. When ripe, they come out of the fruit, drop and pupate in the ground. Contrary to the olive fly, the pupa stage always takes place outside the attached fruit.
The population dynamics of this insect varies according to the geographic region and according to the years.
The dynamics are determined by three conditions: the seasonal thermal course, with particular reference to the cold season, food availability, the reproductive potential of the species. Since the biological potential increases from generation to generation, the danger of the species depends on the number of generations that are repeated over the course of the year and on the speed with which the first generation develops. For this reason the danger of the species is closely linked to the latitude.