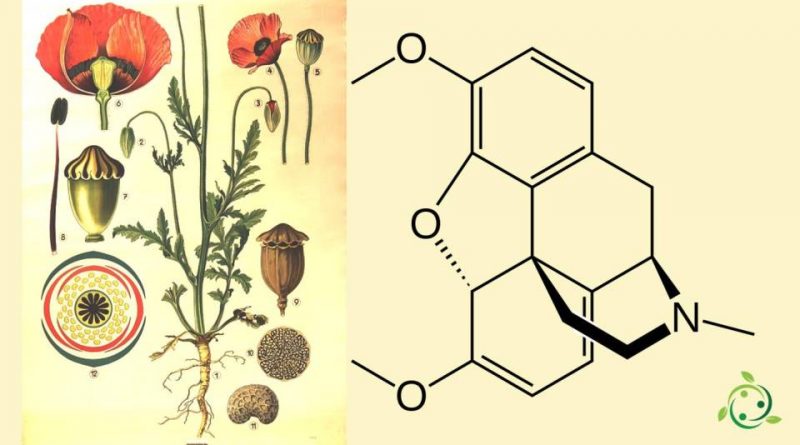 Thebaine, whose term in the official IUPAC nomenclature is: 6,7,8,14-tetradehydro-4,5a-epoxy-3,6-dimethoxy-17-methylmorphinan is an alkaloid also known by the alternative names of: paramorphine and demethylmorphine.
Thebaine has a brute or molecular formula: C19H21NO3 and is one of the numerous alkaloids contained in opium.
Opium seed capsules (Papaver bracteatum Lindl.) Are the primary source of thebaine, and with significant quantities it is also present in the stem.
Its name derives from the Egyptian city of Thebes, one of the ancient centers of the opium trade.
Thebaine, from the chemical point of view, is a substance similar to morphine and codeine but more toxic; it is mainly used to create synthetic derivatives such as oxycodone, naloxone (opioid receptor antagonist), buprenorphine and etorphine.
Furthermore, thebaine cannot be used for analgesic therapy or even as a bechico (calming cough action) because it has a highly convulsive effect similar to strychnine, so that it has no therapeutic use.

Thebaine, in high doses, causes convulsions similar to strychnine poisoning. The synthetic (+) – thebaine enantiomer exhibits analgesic effects apparently mediated by opioid receptors, unlike the natural inactive (-) – thebaine enantiomer.
Among the data concerning thebaine it is recalled that in 2012 146,000 kilograms of thebaine were produced. In 2013 Australia was the leading producer of thebaine-rich poppy straw, followed by Spain and then France. In 2017, the world production of thebaine dropped to 2,008 kg. Together, these three countries accounted for about 99% of the global production of such poppy straw.