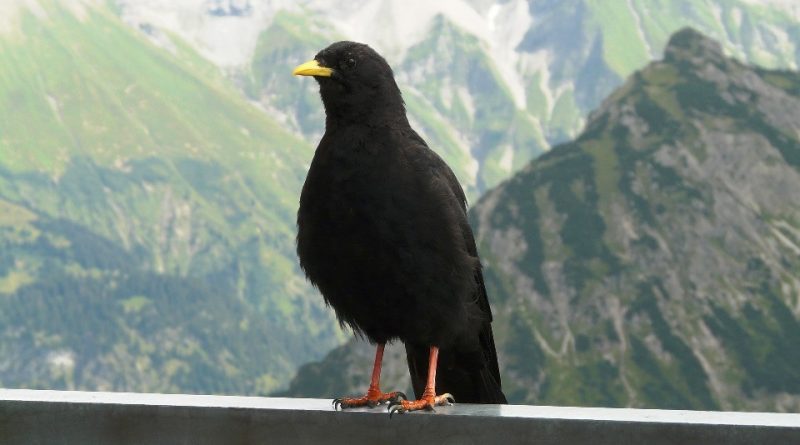 The alpine chough (Pyrrhocorax graculus L. 1766) is a bird belonging to the Corvidae family.

Geographic Distribution and Habitat –
The Alpine Chough is a bird found in a Palearctic range that goes from southern Europe, north Africa, to south-eastern Tibet.
In southern Europe, the species is present in the Cantabrian mountain range, in the Pyrenees, in the Alps, in the Balkan peninsula, as well as in Crete and Corsica.
In the Middle East it is present in Turkey and in the Levant, to the south up to Mount Hermon, as well as in the Caucasus, Kurdistan, the Elburz and Zagros mountains, pushing east through central Asia to the Altai and Sajany mountains in the north -north of Afghanistan, the Pamir, the Tien Shan, with an isolated population in the north of Balochistan) and the western offshoots of Arunachal Pradesh through the southern foothills of the Himalayas to the south (from Kashmir to southern Tibet, through Nepal, Bhutan and Sikkim).
In North Africa it is present in the Rif, a predominantly mountainous region in northern Morocco, and in the High and Middle Atlas.
In Italy this species is present and breeding throughout the Alps (although it is common only in Valle d’Aosta and the Dinaric Alps) and on the Apennines.
Its habitat is that of the high mountains where it populates the alpine pastures above the tree line, with the presence of rocky cliffs or stony ground where to seek shelter for the night and nest, between 1260 and 2880 m of altitude in Europe, between 2880 and 3900 m of altitude in North Africa and between 3500 and 5000 m of altitude in the Himalayas. Single pairs have nested at 6500 m of altitude, while it is not uncommon to observe small groups of specimens following the rock climbers on Mount Everest up to over 8000 m. 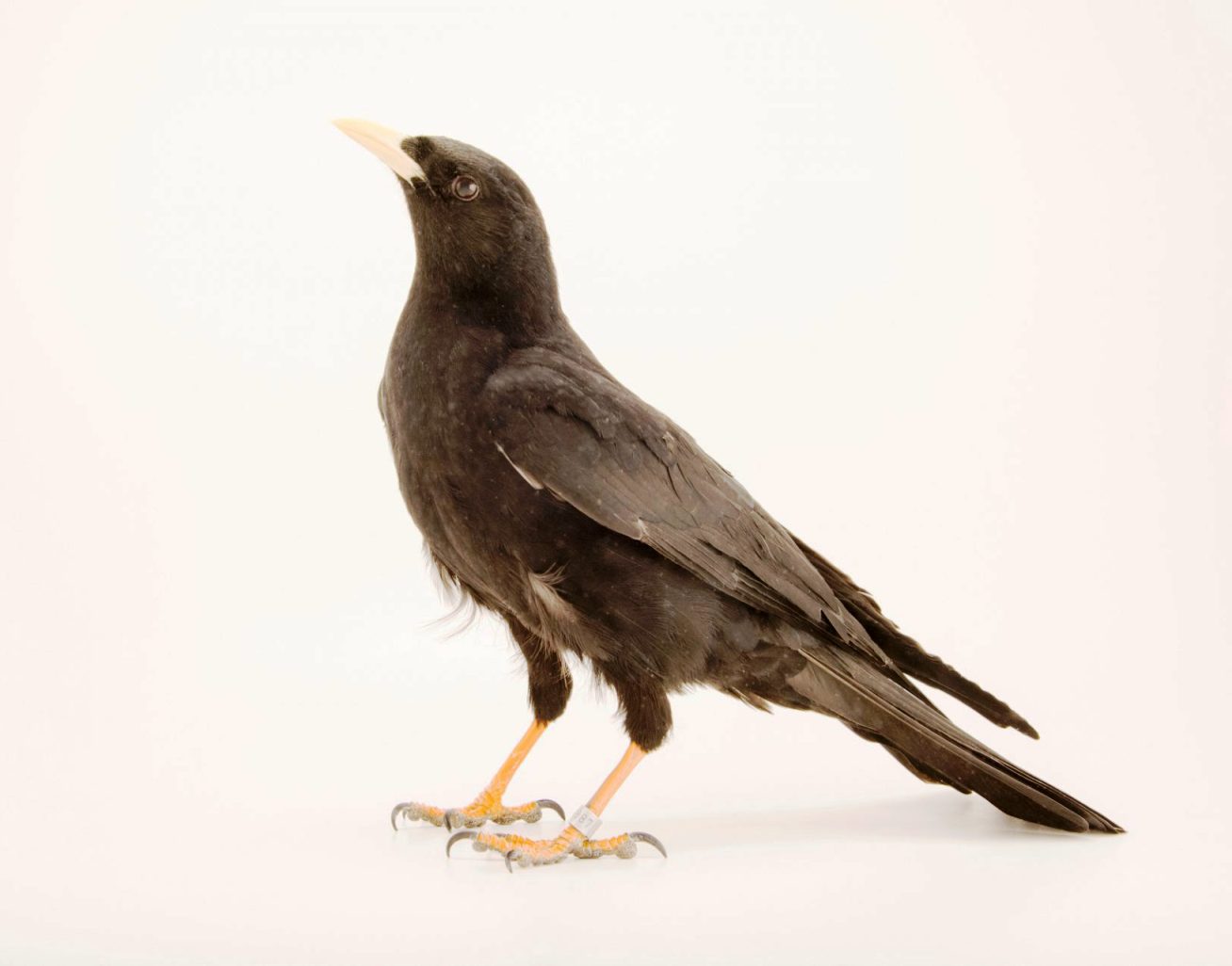 Description –
The Pyrrhocorax graculus is a bird with a length of up to 38 cm and with a wingspan between 75 and 85 cm, for a weight that varies between 160 and 275 g. there is a slight sexual dimorphism with the males being slightly heavier than the females.
This bird is recognized for its massive and robust appearance, with a small and rounded head and with a thin beak curved downwards, of a lemon yellow color; the eyes are dark brown
The wings are long and typed, the tail is square and the legs are robust and not very long and of a red-orange color.
The plumage is uniformly glossy black all over the body.
The two sexes do not show sexual dimorphism in the coloring while the juveniles differ from the sexually mature adults for the blackish coloring of the legs.
This bird is also recognized for its ability to glide.
They are very vocal birds so much so that they tend to keep in constant vocal contact with other individuals of the same species. Their calls include the unmistakable chirping whistle that sounds like kyorr, very musical and unique among corvids, as well as a series of cries ranging from alarm chirps to subdued chirps emitted during feeding or grooming.

Biology –
The reproduction of Pyrrhocorax graculus begins with the construction of the nest which is built in cavities or crevices of rocky walls; the rather massive nest is built by both parents with twigs and roots intertwined in a cup, and lined internally with grass and fur.
In this the female lays 3-6 cream-whitish eggs with brown spots starting from the period of April until May.
The eggs are hatched only by the female for a period of 14-21 days, while the male remains on guard near the nest and also takes care of finding food for himself and for his partner. At the end of the hatching, pullets are born covered with a dense duvet, which are fed by both parents up to 29-35 days of life, when they fly up joining the flock to which the parents belong, where they will continue to insistently ask for the also cues to other adults.
This bird is a strictly monogamous species, in which the couples remain together for life and show a marked philopatry, tending to always nest in the same site.
Generally it nests in solitude.

Ecological Role –
The alpine chough is a sedentary species throughout its range, even if, however, during the winter, while maintaining the perches where to spend the night always in the same place at high altitude, they generally descend further downstream to find food.
It is also a bird with essentially diurnal and gregarious habits of life, which lives in groups that can number from a dozen to over a thousand individuals, generally remaining numerically more consistent during the summer months (when the availability of food is major) and splitting up during the winter.
It is also a very mobile species as during the day it travels even tens of kilometers (up to 20 km in radius and up to 1600 m in altitude) to reach foraging places.
They are also non-territorial birds but within a flock there is a more rigid hierarchy the more the food is scarce, which sees the dominance of the adult birds over the young and immature ones, in addition to the dominance of the male individuals on the females.
As far as nutrition is concerned, these are basically omnivorous birds, in which the carnivorous / insectivorous component is predominant during the hot period and the vegetarian one predominates during the cold months.
The search for food is carried out on the ground and in groups through a method of scanning the low grass and the ground with the beak in search of prey or other potentially edible material.
During the year it frequents different areas to feed, staying at higher altitudes during the summer (when the breeding birds avoid lower altitudes, despite the fact that there they could easily find large quantities of food left by tourists) and gradually descending more downstream with the arrival of the first snowfalls, reaching the inhabited centers in March-April before returning to the peaks: in the areas with the presence of hotels at high altitude, the choughs (especially young people) tend to never go down to the valley, finding the necessary food in those places.
Generally, however, this species has adapted to the human presence in the mountains, so much so that in tourist areas, it integrates its diet with the waste left by man, becoming frequent presences along the paths, in the picnic areas and in the landfills of the resorts.
The diet then changes with the arrival of late spring and the summer months, when it is made up almost exclusively of small insects (especially the small beetles Selatosomus aeneus and Otiorhynchus morio, as well as grasshoppers, caterpillars, snails and maggots). In autumn, winter and early spring, however, this bird eats mainly berries (blueberry and other berries, juniper, sea-buckthorn, bearberry, hackberry), rose hips, fruit (apples, pears, grapes) and sometimes the flowers of greater saffron, the latter perhaps as a source of carotenoids.
A final note concerns the characteristic of this bird, as occurs in other corvids, of storing excess food in cracks in the rock and then consuming it during the lean period, taking care to cover it with small stones.
This species, during the last ice age, had a much wider range and was also widespread in France and the Canaries, and up to the 18th century also in the Tatra Mountains.
In Italy, currently, the population is vast (greater than 20,000 km², Boitani et al. 2002). The number of mature individuals is estimated at 10000-20000 and is stable (BirdLife International 2004). Although this estimate is not based on quantitative data, the species in Italy does not seem to reach the conditions to be classified within one of the threat categories (population decline of 30% in three generations, reduced number of mature individuals, restricted range) and is therefore classified as Less Concern (LC).