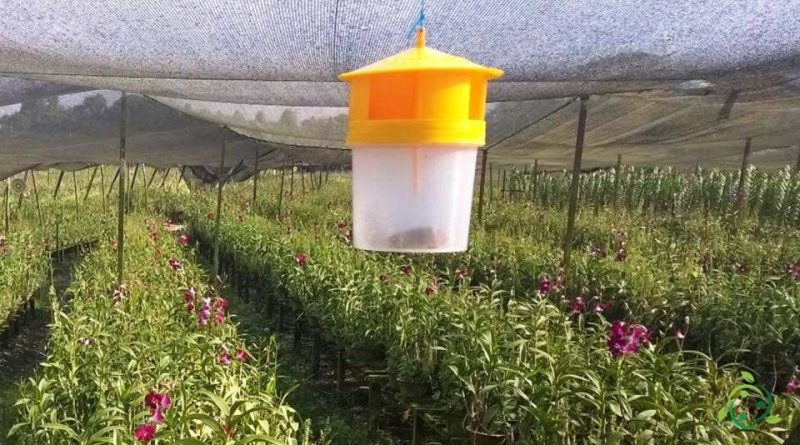 Chemotropic traps for catching insects are the ones that exploit the principle of using an attractant that stimulates the olfactory sense of insects.
These traps therefore use a chemical attractant which can typically be a pheromone or a food attractant.
Among the chemotropic traps, pheromone traps play a very important role, which have had, especially in recent times, a very wide diffusion.
These traps are based on the use of a sex pheromone, synthetically reproduced, capable of creating the so-called “sexual confusion” that deceives insects and therefore steals them, in some way, from the event of reproduction.
Pheromone traps can be found on the market but can also be handcrafted by simply purchasing the pheromone and placing it in a self-built trap that can be of different manufacture.
Pheromone traps are obviously very selective as the pheromone used will be that of a species of insects so that mass capture will be avoided with obvious ecological problems due to the reduction of entomofauna.
Furthermore, these traps have a wide range of action; just think, for example, that the male of the olive moth is able to capture the pheromone even at a distance of a few kilometers and a single hut trap, placed in an olive grove in the period of the flickers of the anthophagous generation, can also capture thousands of males in a week.
Another type of chemotropic trap, as anticipated, is the one that uses food attractants. These traps obviously have a lower selectivity and are placed in an intermediate position between the chromotropic ones and the pheromone ones.

The food attractant used is normally of a carbohydrate nature, such as molasses or a sugar dissolved in an aqueous or protein solution.
It should be emphasized that, however, sugary substances do not have a notable effectiveness as food attractants, while in some areas the efficacy of protein attractants is widely tested.
Protein attractants are actually made up of compounds based on products that contain ammonia or amine, active ingredients much appreciated by various insects.
There are many types of these traps on the market but, even here, they can be prepared by simply using ammonia salts, such as ammonium carbonate or ammonium bicarbonate.
These chemotropic traps are very efficient especially for Diptera, and in particular, for the capture of Diptera Tefritidi, with efficiency similar to those that use the same pheromone.
However, the efficiency of chemotropic traps also depends on the choice of location, especially in relation to prevailing winds and, for certain species, lighting.
Chemotropic traps are useful for both monitoring and mass trapping, with significant differences according to species and attractiveness.
If installed for monitoring, 1-4 traps per hectare (depending on the case) are usually sufficient when pheromones are used, or a higher density with the use of food attractants.
The effectiveness of these traps is linked both to environmental conditions and to the combined use of multiple attractants, depending on the goal to be achieved.