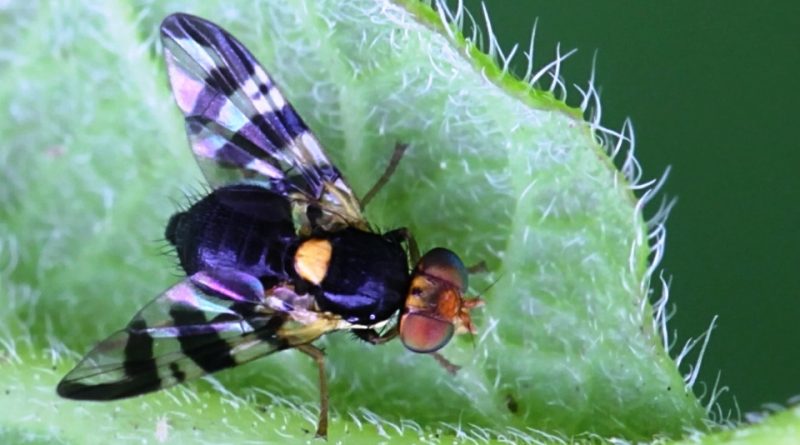 The cherry fruit fly (Rhagoletis cerasi Linnaeus, 1758) is an insect belonging to the Tephritidae family.

Geographic Distribution and Habitat –
Rhagoletis cerasi is a widespread species in most of Europe, with the exception of the British Isles, from Western Siberia to the Caucasus, in Kazakhstan, Central Asia and Altai. The insect was first detected in North America in 2016.
It represents one of the major entomological problems of cherry production, causing serious damage to the fruit. In addition to the drupes of cultivated and spontaneous cherry trees, it can be found on species of caprifoliaceae belonging to the genus Lonicera.
As far as the geographical area is concerned, the problems related to this insect are more relevant in the southern regions than in the northern ones, and more serious in the hilly and foothill areas than in the lowland areas.

Morphology –
The Rhagoletis cerasi is a small Diptera whose adults measure about 3-4 mm in length.
The body is blackish in color, with the dorsal part of the last thoracic segment yellow-ocher.
The eyes are compound, greenish in color and the wings are transparent, with the presence of dark transverse bands.
The larvae are whitish, about 5-6 mm long and after 3 larval stages they reach maturity; these are carpophages.
The pupa is protected by a cylindrical puparium, about 4 mm long, formed by the transformation of the exuvia of the last larval stage. Initially light beige in color, the puparium becomes greenish just before the adult flicker.
The egg has a tapered shape and whitish color. It is small in size (0.7 x 0.2 mm) so it is hardly visible to the naked eye.

Attitude and Life Cycle –
The cherry fruit fly overwinters at the pupa stage, in the ground, buried a few centimeters.
The adults flicker in the spring period, between mid-April and until the whole month of May and fly over the foliage and mate to ovipose, as a rule, when the cherries change their color from greenish to pinkish-yellow.
The females, through their ovipositor, lay an egg inside the drupes. These lay one egg for each cherry; activity that is made possible by the marking of the pheromones that the female performs on the drupe, to prevent other oviposition that would determine nutritional competitions and possible cannibals.
In some cases, however, more eggs are laid in a cherry with the development of more larvae.
The newborn larvae dig tunnels in the pulp, with their powerful chewing mouthparts transformed into hooks, and settle between pulp and pit.
Once they reach maturity, they drop to the ground where they are buried and, subsequently, pupate to overwinter. The Cherry Fly makes one generation a year.
It should be noted that sudden drops in temperature at the time of the flickering cause high mortality; similarly the pupae are damaged by too long wet soil.

Ecological Role –
The damage on the cherry drupes occurs is caused by the trophic action of the larvae; these complete their development inside the fruit, feeding on the pulp down to the core. In fact, it is easy to see them between pulp and stone.
Affected cherries usually have a browned area around the penetration hole with decaying tissues that make the fruit unmarketable. In some cases there is an early drop of the fruit. Furthermore, the drupes attacked are easily subject to rot such as those due to monilia which can rapidly spread even to healthy fruits. In some cases the affected fruits show no visible symptoms, not even in the post-harvest sorting, and then lose consistency later.
The severity of the damage is also linked to the cultivars: generally the later ones are more susceptible to attacks by Rhagoletis cerasi than the early cultivars; likewise, sweet cherry varieties are more susceptible than sour cherry varieties.
From a commercial point of view, the attached cherries have the pulp that loses consistency in a more or less evident way and in any case undergo considerable depreciation.
Furthermore, the export of infested batches is prohibited, in accordance with international regulations on the marketing of fruit.
The fight against the cherry fly has often been a chemical one.
Normally it was a preventive fight that makes use of a possible sampling of the population, with trap bottles (filled with ammonium phosphate solution) or with yellow chromotropic traps that must be placed in the plantations in the period of May.
The treatment is performed on the entire foliage during the veraison period.
However, remember that the intensity of the pest potential can be reduced with poisoned food baits; also take into account that the choice of varieties, as mentioned above, affects the intensity of the attack and that excessive specializations of the cherry trees play in favor of this insect.
To reduce the use of insecticides that are harmful to the ecosystem and the entomofauna, it is recommended to apply agroecological techniques, with intercropping of rows, grassing, minor specializations and, when necessary, biological control interventions.
In organic agriculture the fight against Rhagoletis cerasi, in the presence of excessive specializations, however, becomes particularly difficult due to the limited availability of effective active ingredients. Among the natural substances allowed by the organic production regulations we find:
– natural pyrethrins; the first treatment must be carried out at the first capture of the chromotropic traps. The use of pyrethrins against Rhagoletis cerasi is advisable only in case of limited infestations, given the low efficacy of these substances. The interventions can be repeated, even after only 4-6 days in case of rain that washed away the active principle on the leaves;
– rotenone; in Italy the product is registered with a 10-day lead time. As for the pyrethrins it is essential to intervene starting from the first catches of the chromotropic traps, carrying out 2-3 interventions at a distance of 10 days (in case of rain it is advisable to intervene further). Rotenone is effective for the killing action of adults in flight at the time of treatment; if the attack is not very virulent, the damage can be limited to below 5-10% of the affected fruit. However, it should be remembered that the treatments must be suspended 10 days before harvesting, thus leaving a sufficient time window to allow the insect to lay its eggs and inflict damage;
– azadirachtin; active principle that in addition to interfering with the growth of insects, acts on the phytophages carrying out a mostly repellent action (with a decrease in oviposition) and anti-feeding by reducing the activity of the larvae. Its main advantage is that it does not exercise any activity towards beneficial insects (natural limiters and pollinators) and has no shortage time;
– Bacillus thuringiensis var. tenebrionis; Widely used in organic farming, it can also be used, quite effectively, to contain cherry fly attacks. Also in this case it is essential to intervene promptly, at the moment of oviposition to strike the larvae.
– entomopathogenic fungi; recently, products based on Beauveria bassiana and Paecylomices fumosoroseus, pathogens for Rhagoletis cerasi, are being studied. Their use in the field is still limited, even if some studies have reported encouraging results, albeit subject to high variability based on attack intensity, climatic conditions, cultivars and application methods;
– entomopathogenic nematodes; the use of entomopathogenic nematodes aims to target the wintering pupae in the soil to reduce the populations of adults in spring. The methodology is, for now, still experimental but the first results in the field and in the laboratory seem to show good efficacy in reducing the incidence of Rhagoletis cerasi.