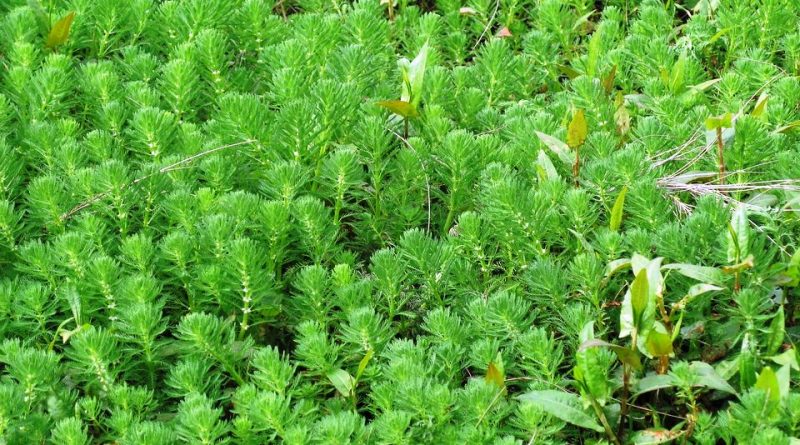 The Parrot’s-feather or Parrot feather watermilfoil (Myriophyllum aquaticum ((Vell.) Verdc., 1973) is a shrub species belonging to the Haloragaceae family.

Etymology –
The term Myriophyllum comes from the Greek μῡρίος myriós thousands, countless and from φύλλον phýllon leaf: for the leaves divided into numerous capillary laciniae.
The specific epithet aquaticum comes from aqua water: for the growth environment, in or near water.

Geographic Distribution and Habitat –
Myriophyllum aquaticum is a plant native to the Amazon River in South America but present, as an invasive species, in a much wider range, except in Antarctica.
It is present in North America where it was probably introduced around the end of the 1800s. Because it prefers a warmer climate, it is found mainly in the southern parts of the United States.
During the twentieth century, it also colonized areas of South Africa, Japan, England, New Zealand and Australia.
Its habitat is typically that of freshwater streams, ponds, lakes, rivers and canals which have a high nutrient content. 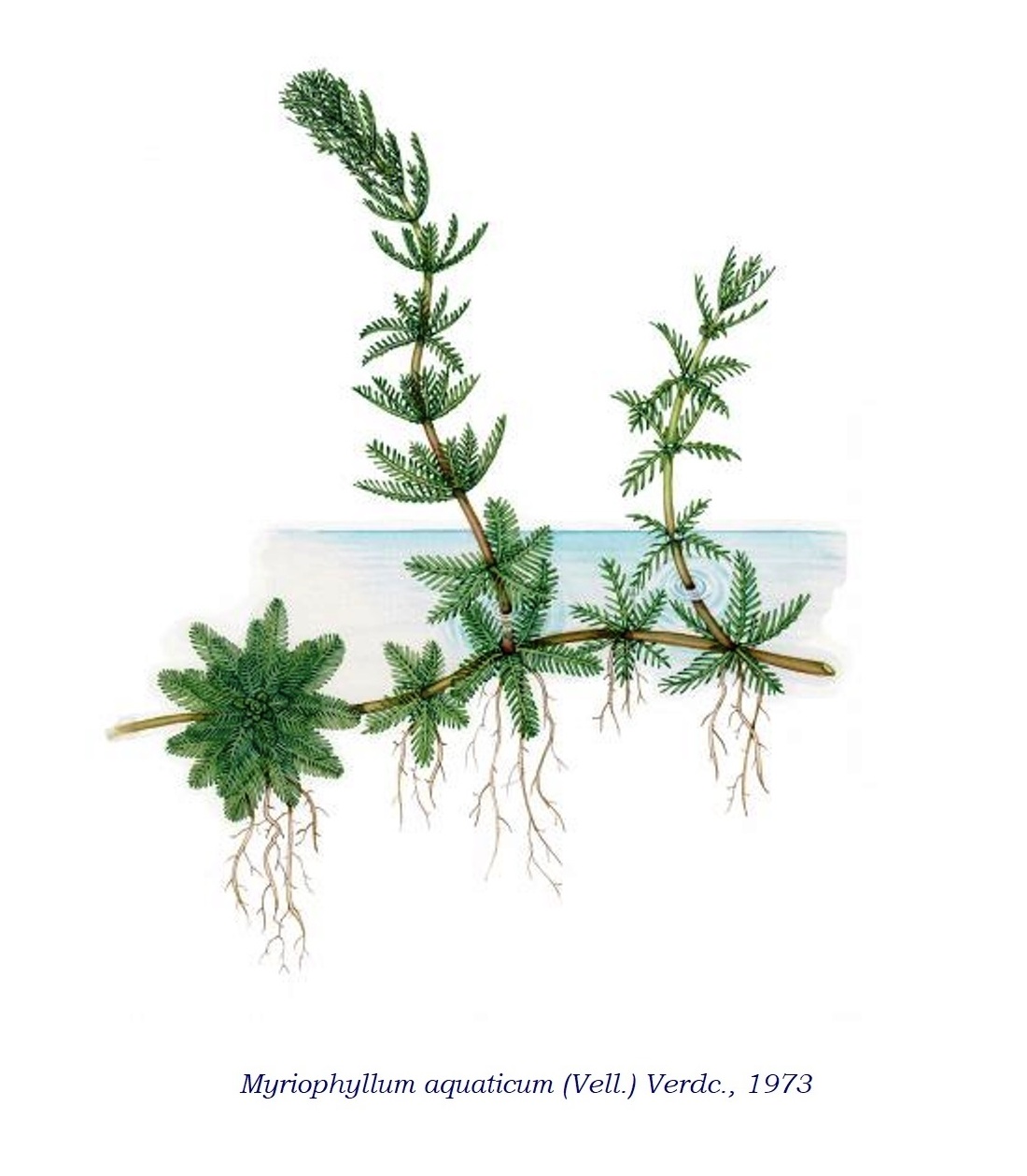 Description –
Myriophyllum aquaticum is an aquatic rhizomatous plant.
It has fleshy roots that lurk in the soil or cling to rocks.
Its leaves are similar to feathers arranged around the stem in four to six greyish green spirals, whose color, however, like many other plants, changes in the aquarium according to the type of lighting.
The emerging stems and leaves are the most distinctive feature of the plant as they can grow up to 30-40cm above the water surface and almost resemble small fir trees.
Emerging woody stems grow over 1.5 meters in length and extend all the way to the shore.
The flowers are pinkish-white.
Flowering occurs when the water temperature begins to rise in the spring.
Most of the plants bloom in spring; however, some also bloom in the fall.
Almost all plants of this species are female, in fact there are no male plants found outside of South America.
For example, the seeds are not produced in any North American plant and the plant reproduces agamically as the new plants grow from fragments of already rooted plants.

Cultivation –
The Parrot’s-feather is a plant with an ethereal and fluffy appearance, very beautiful if grown in an aquarium but which cannot stand high temperatures.
It is widely used for the pond, but it can also be cultivated in an aquarium or aquaterrarium where, if it finds suitable conditions, as it is very demanding, especially as regards the light, it can also become a weed, the only limitation is the temperature, which it must not exceed 25 ° C so that the plant does not perish until it dies.
One of its main botanical characteristics is that it is a dioecious plant, that is, there are male plants and female plants, and this has led to confusion even in the name, in fact it was discovered that those that were marketed as Myriophyllum elatinoides were actually plants male, while those known as Myriophyllum aquaticum were the only female plants.

Customs and Traditions –
Myriophyllum aquaticum is a popular plant in water gardens.
However, this plant has become an invasive and infesting species in many areas. The plant can be introduced to new areas when sections of its rhizome are excavated and moved.
Due to its attractiveness and ease of cultivation, the plant has been introduced around the world for use in indoor and outdoor aquariums. It is also a popular water garden plant. However, it escaped cultivation and spread via plant fragments.
Although this species can provide cover for some aquatic organisms, it can seriously change the physical and chemical characteristics of lakes and streams. In fact it grows abundantly, obscures the algae present in nature and clogs the irrigation ducts and channels.
These plants form a dense mat on the surface of the water. Because of this, they protect water from sunlight and cause native plants to die due to lack of light. Organisms that feed on native plants can die from food shortages. These dense mats also cause problems for swimmers and boat propellers that can get caught. They also often become a breeding ground for mosquitoes.
Herbicides have been used to contain it but have not had the desired effects, partly because the plant has a waxy cuticle that seals the poison.
The most appropriate solution is that of the gradual physical removal of the plant from the sites where it grows.
Removal consists of cutting, picking and turning. These methods only get the best results when the extent of the infestation has taken over all available niches. However, the use of physical control methods while the plant is still invading will tend to increase its spread rate.
As for herbicides, these are most effective when applied to young growing plants.
In the UK, this plant is one of five introduced aquatic plants that have been banned from sale since April 2014.
In addition, the plant is included in the list of invasive alien species of relevance of the European Union.

Preparation Method –
Myriophyllum aquaticum is a plant that can be used in ponds and lakes and for constructed wetlands. However, due to its ability to overwhelm other species and become invasive, its use is not recommended.