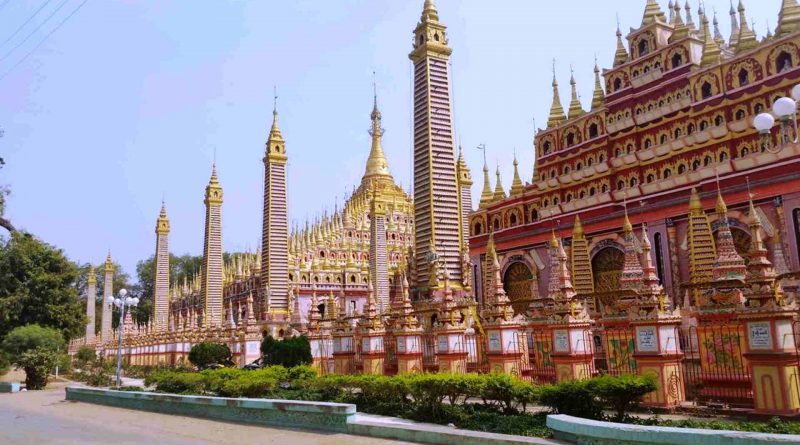 Burma or Myanmar is a state in Southeast Asia.
This country, in 2017, had a population of 55,499,500 inhabitants.
Its capital is Naypyidaw, which had 1,160,242 inhabitants in the 2014 census.
The majority of the population is of Bamar ethnicity and Buddhist religion, but there are also numerous ethnic minorities, which since independence have been involved in various armed conflicts with the central government.
Burma borders Bangladesh and India to the west, China to the north-east and Thailand and Laos to the east. It has a width of 678,500 km² and is the largest state in Indochina and twice the size of Italy, slightly larger than Afghanistan and slightly less than Zambia.
Burma is crossed by the Tropic of Cancer.
The territory can be divided into five parts from a physical point of view: the mountains of the north, those of the west, the plateau of the east, the central basin and the coastal area.
In the north the peaks are rugged and high and are grafted directly into the Himalayas, of which they form the extreme buttress. In the western area, on the other hand, the chains are lower.
To the east lies the Shan plateau, arid and uncultivated in its northern part, rich in tropical forests in the southern part. Towards the west the plateau descends steeply while towards the south it extends into reliefs that form the coastal area of ​​Tenasserim.
The coastal area proceeding from north to south has high and jagged coasts, bathed by the Bay of Bengal; the Irrawaddy delta and the coastal plains overlook the Gulf of Martaban, in the southernmost part the coasts become high and rocky again.
From the hydrographic point of view, Burma is characterized by the Irrawaddy River, which stretches for about 2,200 km. This river crosses the country from north to south and is navigable for about 1,450 km; it flows into a large delta, of 9 branches, in the Gulf of Martaban, where the Sittang also flows.
The great delta of the river constitutes an ideal territory for the cultivation of rice, such as to be able to satisfy the entire needs of the country, while the river itself represents an important communication route, through which goods, especially precious woods, still travel. , and exotic.
Burma is also crossed by the Saluen River, which is longer than the Irrawaddy (almost 2,850 km), but poorly navigable, due to its shallow depth, and along which the precious teak wood is conveyed from the Shan plateau to the ports. , and which crosses Burma only in its last stretch; another river is the Chindwin, whose practicability depends largely on the rainy season, and which is the main tributary of the Irrawaddy, where it flows into Mandalay. Finally, there is the Mekong River, which marks the border with Laos.
Burma is washed by the Andaman Sea and the Bay of Bengal, so it was hit by the tsunami of December 26, 2004, which caused 61 deaths. There are no significant lakes from the hydrographic point of view, while Lake Inle is very important: a destination of great tourist interest that extends about 900 meters high in the western part of the Shan plateau.

Climate –
From a climatic point of view, Burma is influenced by the monsoon regime that blows on the coast, with fairly high temperatures and abundant rains during the summer season. During the winter season the winds bring cold and dry temperatures, while in the summer they bring the heat and humidity.
In the central plains and on the plateau, the climate is continental, with scarce rainfall. On the coasts, the rains reach up to 5,000 mm per year. 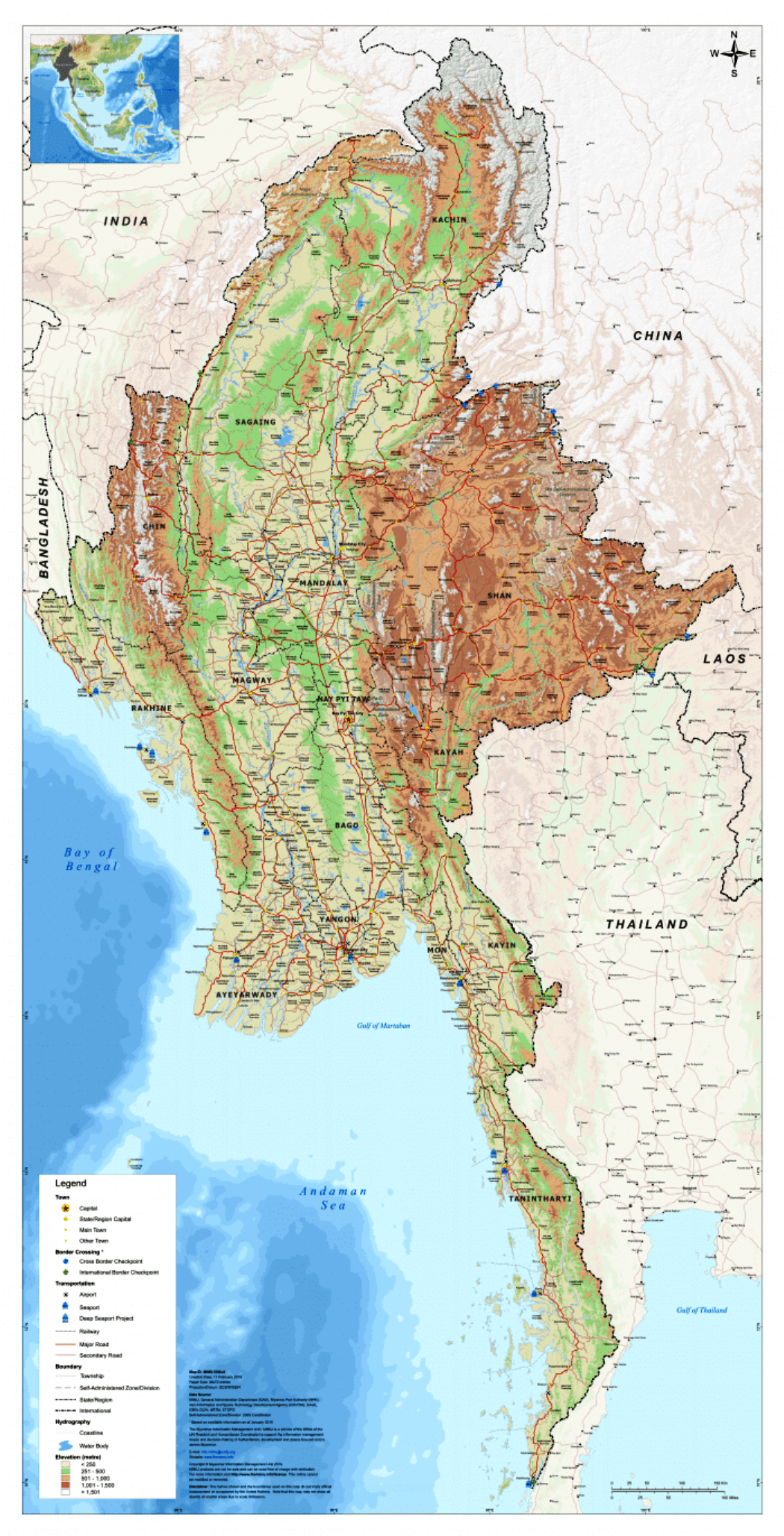 Flora –
In Burma the different habitats have favored an extremely rich and varied nature: brackish waters and mangroves along the coast, strange combinations of tropical forest and cooler mountain habitats in the north. The central plains (the dry zone) are instead mostly covered with rice fields.
As in the rest of tropical Asia, Burma’s endemic vegetation can be divided into two types of tropical forest: monsoon forest (characterized by a dry season of three or more months) and rainforest (which receives rainfall for more than nine months). months a year). The country is said to have over a thousand endemic plant species.
Monsoon forests are characterized by deciduous trees that shed their leaves during the dry season, while rainforest trees are typically evergreen. The region between Yangon and Myitkyina is mainly occupied by monsoon forests, while the peninsular Myanmar up to the south of Mawlamyine (Moulmein) is mainly covered by rainforests. However, there is no well-defined border between the two areas and in many places there is a mixture of monsoon and rain vegetation.
North of the Tropic of Cancer, the flora of the Himalayan region is characterized up to 2,000 m above sea level by a subtropical evergreen broad-leaved forest; in the range between 2,000 and 3,000 m we find semi-deciduous broad-leaved forests, while above 3,000 m there are evergreen conifers that give way to alpine shrubs as you rise in altitude.
Along the coasts of Rakhaing (Arakan) and Tanintharyi, mangrove forests are found in river estuaries, lagoons, tidal channels and along low-lying islands. Here the vegetation is characterized by mangroves and other trees that live in the mud and withstand the salinity of sea water. Along the beaches and sand dunes of the same coasts, but above the tide level, we find a forest of palm trees, hibiscus, casuarine and other trees able to withstand strong winds and occasional storm surges.
The flora of Burma is characterized by an incredible variety of fruit trees, more than 25,000 species of flowers and numerous tropical and bamboo trees. Cane and rattan are also abundant.
The country holds 75% of the world reserves of Tectona grandis, a tree better known as teak (kyun in Burmese). This compact, resistant and highly prized wood is the most important item of Myanmar’s exports: its main buyers are China, Singapore and India.

Fauna –
Unlike the times when Marco Polo visited the country in the thirteenth century, the environment of Burma has changed both for some natural cycles and for human action.
Today it is believed to host 300 mammal species, 687 ornithological species, 262 types of reptiles and 80 varieties of amphibians; 94 species are at risk of extinction, including the tiger, two varieties of rhinoceros and the red panda.
Like the flora, the fauna of Myanmar is also closely linked to the geographical and climatic characteristics of the various regions of the country, so the native species of the northern part are mainly of Indochinese origin, while those located in the southern part are typical of the Probe (Malaysia, Sumatra, Borneo and Java). The fauna of the Himalayan region north of the Tropic of Cancer (immediately north of Lashio) is similar to that which lives in northeastern India. The presence of a vast region in which these three areas overlap, ranging from the Myitkyina area in the north to the Bago Mountains in the center, demonstrates that Myanmar potentially possesses suitable habitats for the plants and animals of the three areas.
Among the most characteristic mammals, present in ever smaller numbers in the densest forests of the country, we remember the leopard, the fishing cat, the civet, the Indian mongoose and the crab-eating mongoose, the Himalayan bear, the Asiatic black bear, the Malayan bear, gaur (Indian bison), banteng (a type of wild cattle), serow (Asian mountain goat), wild boar, sambar (type of deer), muntjac (barking deer), tragulo (a kind of small deer), the tapir, the pangolin, the gibbon and the macaque. Marine mammals include dolphins and dugongs.
In Burma we find about 8,000 Asian elephants, which represent roughly one third of the world population. This estimate also includes the approximately 4,000 working pachyderms which are mainly used in agriculture and in the harvesting of timber. The number of wild elephants is rapidly decreasing, mainly due to the indiscriminate logging which leads to the destruction of their natural habitat. Ironically, domesticated elephants (often captured by herds that live in the wild) are widely used in the timber industry and help to raze the forest on which the lives of their wild cousins ​​depend. As the logging industry grows exponentially in the country, it is feared that the number of elephants in the wild will only decrease in the future.
Among the reptiles and amphibians there are four species of sea turtles along with numerous types of snakes: as many as 52 species of snakes present in the country are poisonous, including the common cobra and the king cobra (hamadryad), the banded krait, the viper malay, green viper and Russell’s viper.
The birdlife of this country is also abundant, with at least 687 migratory and sedentary species. The waterways of the coastal or inland areas of the Delta and the southern peninsular region are a very important habitat for waterfowl in Southeast Asia. Two of the best spots for sighting are Mount Victoria, which, however, requires an expensive government guide to access, and the Moeyungyi Wetlands, not far from Bago and therefore an easy destination for a day trip out of town.