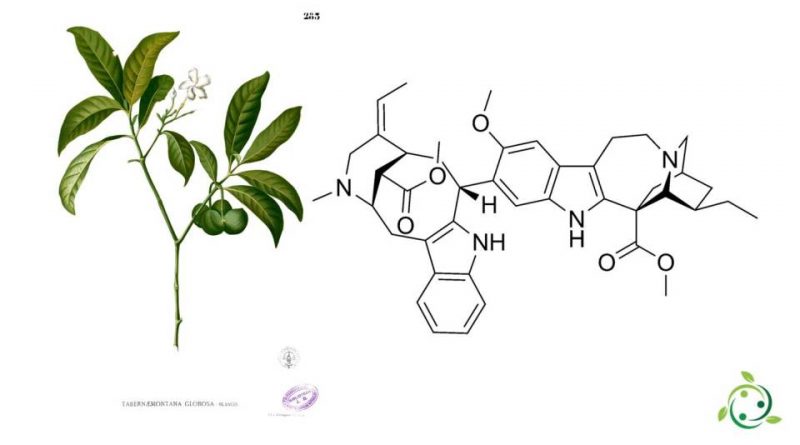 Voacamine, whose term in the official IUPAC nomenclature is: (6R, 6aR, 7R, 11S) -methyl 7-ethyl-3 – ((2R, 6S, 8R, 14S, E) -5-ethylidene-14- (methoxycarbonyl ) -3-methyl-2,3,4, 5,6,7,8,9-octahydro-1H-2,6-methanoazecino [5,4-b] indole-8-yl) -2-methoxy-6 , 6a, 7,8,9,10,12, 13-octahydro-5H-6,9-methanpyrido [1 ‘, 2’: 1,2] azepino [4,5-b] indole-6-carboxylate is a bisindole alkaloid.
Voacamine, abbreviated with the initials VOA, has a brute or molecular formula: C43H52N4O5 and is a substance present in nature and which is extracted from some plants, such as Peschiera (Peschiera fuchsiaefolia (A. DC.) Miers), belonging to the family of Euphorbiaceae, plant from the Amazon rainforest and Voacanga (Voacanga africana Stapf, 1894).
Many studies show that Peschiera extracts have antiplasmodium, antitumor, anti-AIDS and anti-microbial activity.
The newly discovered voacamine showed considerable cardiotonic activity, with less toxicity than cardenolide-based drugs, and is widely used in the treatment of heart diseases.
A general toxicity and intense antimicrobial activity against Gram positive and negative bacteria was subsequently demonstrated.
Furthermore, voacamine, in vitro, on Plasmodium falciparum, has shown antiparasitic activity against both the chloroquine sensitive and the resistant strain. However, it did not increase the activity of chloroquine on resistant strains.

Another study would show that voacamine increases the cytotoxic effect of vinblastine on cancer cells of a drug-resistant lymphoblastoid lineage. In this sense, it was found that vinblastine is able to bind directly to P-gp, while voacamine, and other similar compounds such as coronary aridin and conoduramine, modulate the MDR phenotype through other mechanisms.
Thus, the fact that voacamine is able to increase the cytotoxic effect of drugs on tumor cells but not on Plasmodium falciparum demonstrates that the mechanisms underlying the drug resistance of mammalian tumor cells are different from those of Plasmodium falciparum strains.
Previous studies had already shown that voacamine is able to increase the cytotoxic effect of doxorubicin against drug resistant human osteosarcoma cells and that this increase is due to its ability to competitively inhibit the functionality of P-gp. thus increasing the intracellular accumulation of the chemotherapeutic agent.
In general, the chemosensitizing capacity of voacamine, as well as the induction of cell death by autophagy, makes this substance particularly interesting for future anti-tumor therapy in apoptosis-resistant cells.