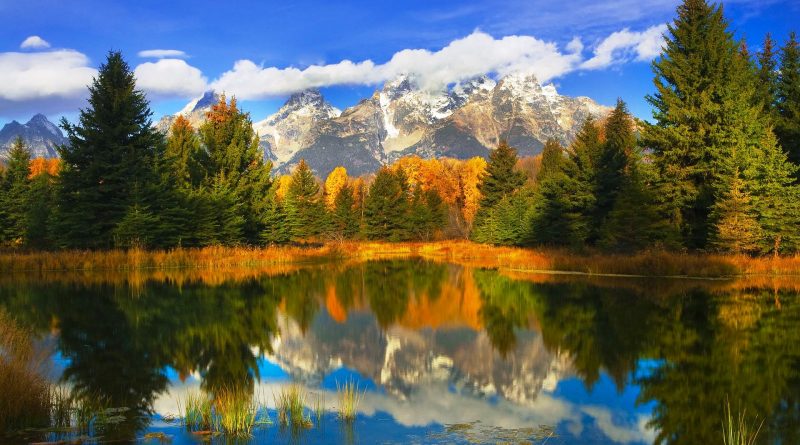 The Great Smoky Mountains National Park, whose WDPA Code is: 369223 is a United States park whose altitude varies between 250 and 2,000 meters above sea level, and the highest point is represented by the Clingmans Dome.
This park has an extension of 2,110.4 km² and was recognized in 1983. The Great Smoky Mountains National Park is also a UNESCO protected heritage site.
Inside the park there are 16 mountains that exceed 1,800 meters.
Due to its extreme variety of altitudes it simulates all the latitudes of the eastern United States, so much so that numerous animal and plant species of the Northeast of the United States have found a perfect ecological niche at high altitudes, while the southern species inhabit the plains.
During the last ice age, the orientation of the Appalachians allowed many species to migrate south along the slopes. As the climate warmed, many northern species returned to their natural habitat, while the southern ones expanded.

Climate –
The Great Smoky Mountains National Park has a generally very high humidity and boasts rainfall ranging from 1,400 mm per year in the valleys to 2,200 in the peaks. This area is the wettest area in the United States, if we exclude the Northeast and Alaska. Much of the park has a humid continental climate, unlike the surrounding areas which are subtropical humid. Forests cover 95% of the park, of which about a quarter of equatorial forest with trees dating back to before European colonization. It is one of the largest examples of deciduous equatorial forest with a temperate climate in North America.

Geology –
The Great Smoky Mountains area includes some of the oldest mountain systems in the world; these reliefs were probably formed 200-300 million years ago. They are unique in their northeast to southwest orientation, which allowed species to migrate along their slopes during climate change such as the last ice age 10,000 years ago. In fact, the glaciers of the last ice age hit the Smoky Mountains without invading them. During that time, glaciers scoured much of North America but did not reach as far south as the Smokies. As a result, these mountains became a refuge for many species of plants and animals which were destroyed from their homes to the north. Smokies have been relatively undisturbed by glaciers or ocean flooding for over a million years, allowing eon species to diversify.

Environment –
Within the Great Smoky Mountains National Park, abundant rainfall and high summer humidity provide excellent growing conditions. During wet years, about 2.5 meters of rain fall in the high region. The relative humidity in the park during the growing season is about double that of the Rocky Mountain region.
Within this park, about 100 species of native trees find a home; more than in any other North American national park. Nearly 95% of the park is covered in forest, and about 25% of that area is made up of ancient forests, one of the largest remaining deciduous, temperate, and ancient forest blocks in North America. Over 1,500 additional flowering plant species have been identified in the park. The park is the center of diversity for lungless salamanders and is home to over 200 species of birds, 66 types of mammals, 50 native fish species, 39 varieties of reptiles, and 43 species of amphibians. Mollusks, millipedes and mushrooms reach record diversity here.
In recognition of the park’s unique natural resources, the United Nations has designated the Great Smoky Mountains National Park as an International Biosphere Reserve. 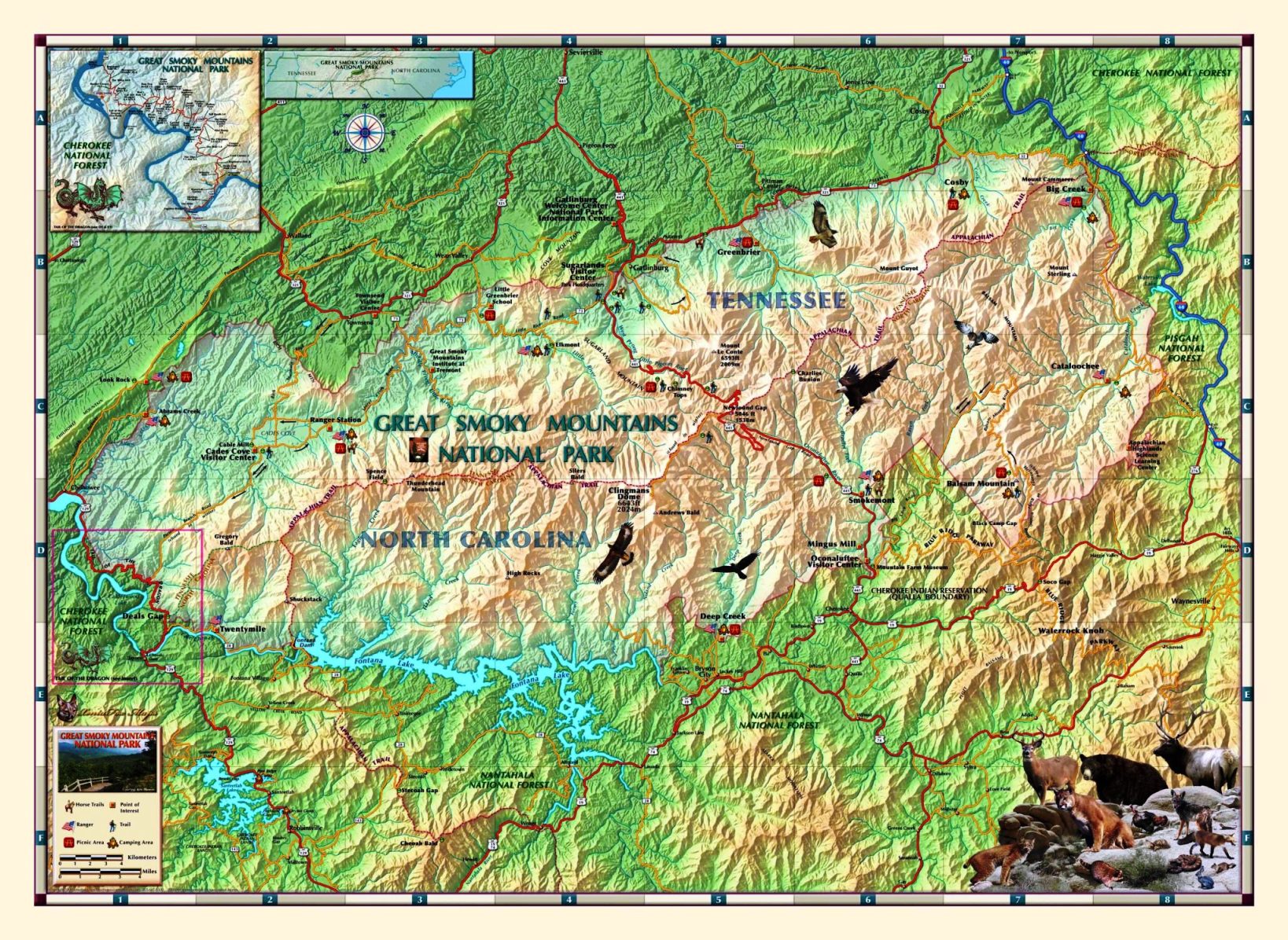 Flora –
The diversity of flowering plants and deciduous trees of the Smokies creates a colorful spring, summer and autumn. Spring flowering begins in the valleys in late March and continues upward to the peaks until July, while the changing colors of the leaves begin on the peaks as early as mid-September and continue downward into the valleys until mid-November.
The name of the bloodroot plant (Sanguinaria canadensis) comes from its stem, from which Native Americans made the red dye. A member of the poppy family, the blood root flowers are white with a gold center. It grows along streams in wooded areas.
Bluet (Houstonia caerulea) blooms from April to June in meadows and on grassy slopes. Its flower is pale blue with a yellow center and measures about half an inch in diameter.
The white flower shape of the Dutchman’s breeches is reminiscent of a pair of trousers hanging to dry on the line. The leafless flowering stem arches over the finely dissected bluish leaves, which stand upright.
Black cherry (Prunus serotina) is the largest native cherry, growing up to 60 feet. It has white flowers in the spring and leaves that turn red or yellow in the fall.
Robinia (Robinia pseudo acacia) grow mainly in the southern Appalachians and have forked and irregular trunks. Their aromatic white flowers appear in late spring. The fruit consists of flat, brown pods, which appear in the fall and then open in the winter.
Mountain laurel (Kalmia latinfolia) is a common evergreen shrub that extends along the east coast from southern Maine to northern Florida and west to Louisiana. Its small pink or white flowers appear in spring in clusters of pointed buds; its leaves are long and narrow.
Umbrella magnolias (Magnolia tripetala) grow in confined regions and are best seen in the mountain valleys of the Smokies. Botanists theorize that magnolias were the first plants to produce seeds in a protective ovary, more than 70 million years ago.

Fauna –
Of all the animals in the Great Smoky Mountains National Park, the black bear (Ursus americanus) is a favorite with wildlife enthusiasts. About 1600 bears live in the park. They range from 200 to 400 pounds in weight. All the bears in the park are black in color, but in other parts of the country they can be brown or cinnamon.
Bears aren’t true hibernators because they don’t sleep in the winter and can be awakened. In November or December, they usually sleep soundly in a hollow of a tree or in a cave of boulders. In January or February, a mother bear can give birth to one to four cubs while sleeping. Weighing only 7 to 12 ounces at birth, little puppies, whose eyes aren’t open yet, are able to find their mother’s milk using their sense of smell. At some point in March, the mother bear wakes up to spring and a litter of cubs.
Black bears are powerful and highly intelligent. They naturally feed on berries, nuts, seeds, acorns, and insects. They have a keen sense of smell and are good at recognizing colors and shapes. This remarkable sense of smell also leads bears to unnatural foods and to developed areas in search of human food. The bears in the park are known for leveraging car doors to obtain items they think are food. To a bear, a can of tennis balls might look like a can of chips. A bottle of sunscreen might smell like coconut cream pie. For this you must be careful of any canned foods and objects in the shape of ice coffers. While bears can’t read the label on a can of pork and beans, they know that food can come in cans.
The red fox (Vulpes vulpes) is about the size of a medium-sized dog and is usually reddish in color (with white underparts, chin and throat). Shy of humans and mainly nocturnal, the red fox is difficult to spot even though it is common in the park. The fox eats almost anything it can sink its teeth into, from birds and crickets to corn and apples. It usually locates its burrows on raised areas so that you have a view of the surrounding area.
The white-tailed deer (Odocoileus virginianus) extends throughout the United States, but is a fixture in the park. They are most commonly seen in open field areas such as Cades Cove and Cataloochee Valley. Biologists estimate that more than 6,000 deer can live in the park. They are light brown to reddish brown in summer and grayish brown in winter. Deer populations can change rapidly. Local overpopulation leads to widespread disease and hunger. Predation by coyotes, bears and bobcats helps reduce the threats associated with overpopulation.
Muskrats (Ondatra zibethica) are most active at night. The muskrat lives along the park’s streams in multi-compartment burrows, which it builds of plants, roots and mud. He also builds platforms for dining on cattails, water lilies, rushes and other surrounding vegetation.
The southern flying squirrel (Glaucomys volans), the smallest of the tree squirrels, is nocturnal. Seeing one is a real feat. The tree squirrel glides, does not fly, by means of large flaps of skin on the sides, which it uses as a parachute. The squirrel is greyish brown on the top and white on the belly.
Birds include the northern flicker (Colaptes auratus); this is the only woodpecker in North America that eats ants it finds on the ground by licking them with its long tongue. It pecks wood as a call to mating or to proclaim its territory. It has a brown back and dark spots on the underside.
The red-eyed vireo (Vireo olivaceus) is nicknamed “preacher” because it sings constantly throughout the day, even as it tries to catch and eat insects. It is among the most common birds in the deciduous forests of eastern North America. The name comes from the bird’s large reddish-brown eyes.
Among the amphibians we find the Jordan salamander (Plethodon jordoni) has red cheeks and is found only at high altitudes in the Smokies. Since no other mountain to the east is this high, this limits its reach. It is one of the 31 salamander species found in the park.
The northern spring peeper (Hyla crucifer) heralds the arrival of spring with its chirping sound after spending the winter hibernating in the crevices of the bark and under the trunks. Mostly nocturnal, this tree frog measures about an inch in length and is tan, brown, or gray. Identifying markings include a dark X on the back and a spotted belly. It lives in wooded areas near ponds and lakes.