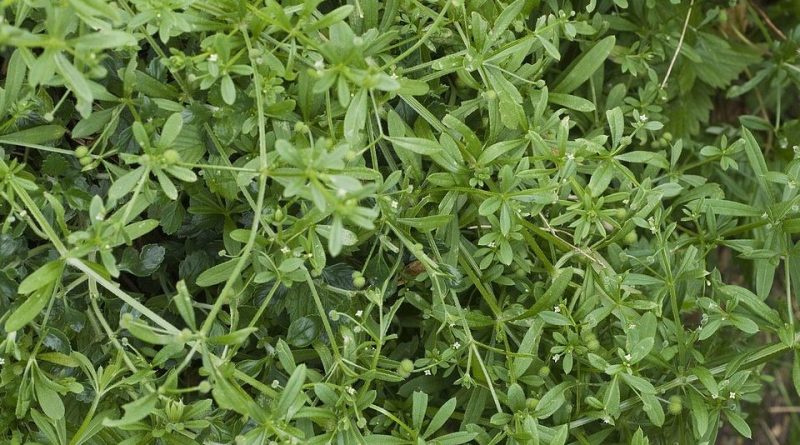 Goosegrass (Galium aparine L.) is a herbaceous species belonging to the Rubiaceae family.

Etymology –
The term Galium comes from the Greek γάλα gála latte: because some species belonging to this genus were used to curdle milk.
The specific epithet aparine comes from the Greek ἀπἄρίνη aparine plant mentioned by Theophrastus; according to A. Gentil it derives from ἀπαίρω apaíro io tolgo, I carry away, with reference to the stems and fruits that stick to everything.

Geographic Distribution and Habitat –
Galium aparine is a plant with Eurasian distribution and presence from Europe to Japan and also present in North America.
In Europe it is present throughout the territory including Great Britain, from Scandinavia in the south and east to Spain, northern and western Asia.
In Italy it is present throughout the territory, including the islands.
Its habitat is that of a common plant on roadsides, uncultivated fields, hedges, scrubs, humid and grassy places from 0 to 1,700 m a.s.l. and beyond. 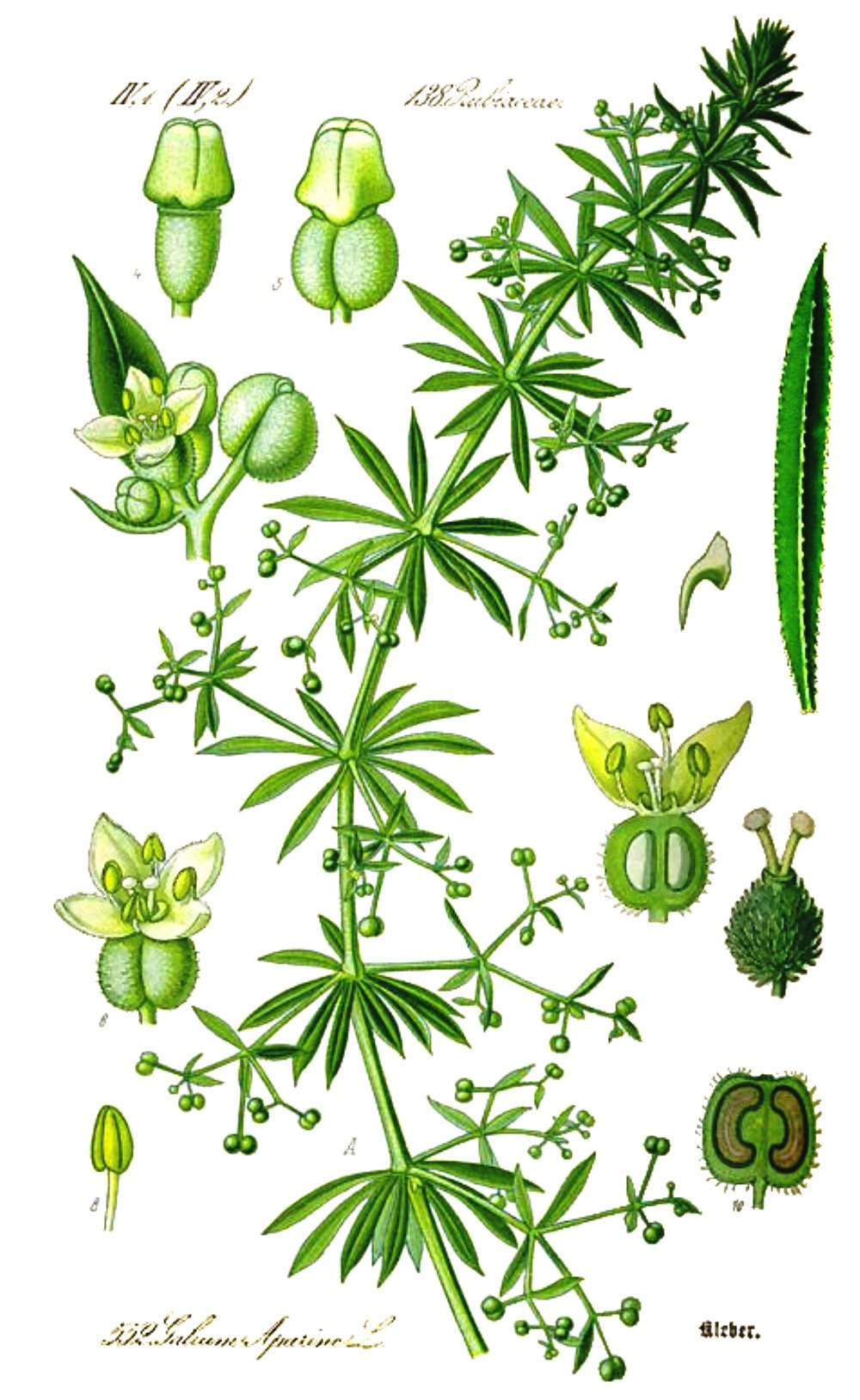 Description –
The Goosegrass is a herbaceous annual, creeping or ascending, often climbing on other plants; angular, robust and tenacious stems, rough due to the presence of bristly reflexed spines; length up to 2 m.
It has 6-9 verticillate leaves, linear-lanceolate or elliptical with spiny mucronate apex on the edge and on the central rib, on the underside of the flap rows of hard hairs.
The flowers form axillary and pedunculated bipar tops, small white-green corollas, the lobes of the corolla are clearly separated.
The fruits are purple diachenes when ripe, covered with hooked bristles, which are firmly fixed at each grip, thus facilitating dispersion.

Cultivation –
Galium aparine is a plant that prefers moist, loose, partially shaded leafy soil.
Plants tolerate dry soils but suffer from sunburn when growing in full sun and don’t thrive in a warm climate.
It is a climbing plant, the stems and leaves are covered with small hooked bristles thanks to which it can adhere to other plants and climb on them.
It is a good species to grow in the wild garden, providing food for the larvae of many butterfly species.
Propagation takes place by seed which is best to sow in situ as soon as the seed is ripe at the end of summer. The seed can also be sown in spring, although it can be very slow to germinate. Once the plant has freed itself it does not need any help to reproduce.

Customs and Traditions –
The Goosegrass owes its name because the plant is unmistakable to the touch due to the rough hairs (similar to velcro) that cover it in all parts.
It is an edible plant whose tender tips of young shoots can be used – raw or cooked as an aromatic herb.
It has a rather bitter taste which some people find unpleasant; its best use is in spring to add it to vegetable soups.
Using this plant as a vegetable is said to have a slimming effect on the body.
Among other uses, it should be remembered that the seed is roasted as a substitute for coffee. In fact it is one of the best substitutes, it just needs to be dried and lightly roasted and has a lot of the flavor of coffee.
A decoction is prepared from the whole dried plant to prepare a tea-like drink.
This plant also has a long history for home medicinal use and is also widely used by modern herbalists. A valuable diuretic can be made which is often taken to treat skin problems such as seborrhea, eczema and psoriasis and as a general detoxifying agent in serious diseases such as cancer.
The Penobscot, American Indians who were part of the Abnaki confederation, once settled in present-day New England, treated gonorrhea with a decoction in which one of the ingredients was this plant.
The whole plant, excluding the root, is alterative, anti-inflammatory, aperient, astringent, purifying, diaphoretic, diuretic, febrifuge, tonic and vulnerable.
The plant is used for both internal and external use in treating a wide range of ailments, including as a poultice for wounds, ulcers, and many other skin problems.
It has been shown that this plant can be useful in the treatment of glandular fever, ME, tonsillitis, hepatitis, cystitis, etc.
The plant is often used in the preparation of a spring tonic drink with other herbs.
Several species of this genus contain asperuloside, a substance that produces coumarin and gives the scent of freshly mown hay when the plant dries. Asperuloside can be converted into prostaglandins (hormone-like compounds that stimulate the uterus and affect blood vessels), making the genus of great interest to the pharmaceutical industry.
A homeopathic remedy was prepared from the plant.
From the same, a red dye is obtained from a root decoction. [4
The dried plant is used as a bait and can be rubbed on the hands to remove the pitch (tar).
The plant is edible after cooking, and is still used today in herbal medicine for various properties.

Preparation Method –
The Goosegrass is harvested in May and June when it blooms and can be used fresh or dried for later use.
It is used both for internal and external use and from it a decoction is prepared for insomnia and as a strong diuretic.
A tea made from the plant has traditionally been used internally and externally in the treatment of cancer. One report says it is better to use a juice from the plant rather than a tea, however, the effectiveness of this treatment has never been proven or disproved.