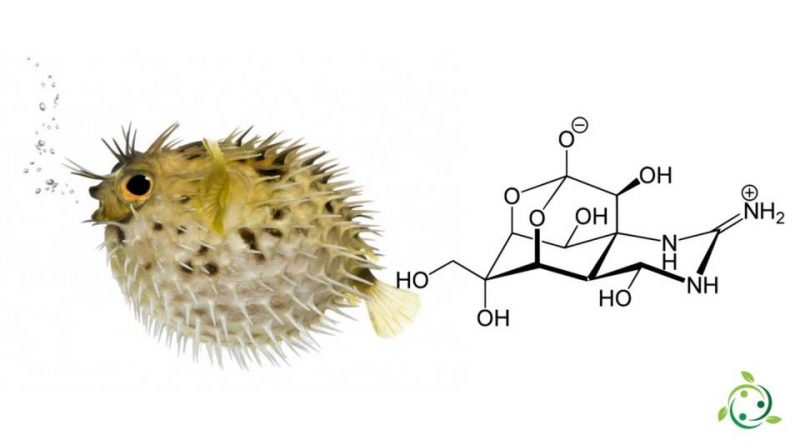 Tetrodotoxin, whose term in the official IUPAC nomenclature is: (4R, 4aR, 5R, 6S, 7S, 8S, 8aR, 10S, 12S) -2-azaniumylidene-4R, 6S, 8S, 12S-tetrahydroxy-6S- (hydroxymethyl ) -2,3,4R, 4aR, 5R, 6S, 7S, 8S-octahydro-1H-8aR, 10S-methane-5R, 7S- (epoxymetanoxy) quinazolin-10S-olate belongs to the chemical category of alkaloids.
Tetrodotoxin, known as TTX, has a brute or molecular formula: C11H17N3O8 and is a powerful neurotoxin.
This substance takes its name from some fish that belong to the Tetraodontidae family and are better known as puffers.
Most puffers are venomous and some are even among the most venomous vertebrates in existence. In some species, in fact, some internal organs such as the liver, but also the skin contain the tetrodotoxin which, as mentioned, is one of the most powerful neurotoxins known.
These fish have symbiotic bacteria that produce tetrodotoxin, which accumulates in the liver, intestines and skin. The same toxin is found in the liver of Diodontidae (porcupine fish) and Ostraciidae (boxfish).
The tetrodotoxin was isolated for the first time in 1909 by a Japanese scientist, after which it had to wait until 1964 to definitively discover its mechanism of action, thanks to the scientists Toshio Narahashi and John W. Moore.
Although the toxicity of this toxin is known, consumption of puffer fish, especially in Japanese restaurants, has not diminished since its effects were revealed.
The tetrode toxin, in fact, is able to kill a man even at very low doses; so much so that this substance is considered even more dangerous than cyanide (100 times more toxic than potassium cyanide).
After the ingestion of just 1 milligram of tetrodotoxin, a series of chain events is unleashed in the body that inexorably leads to death: the voltage-dependent sodium channels placed on the surface of the nerve membranes are blocked by the very strong bond established with the tetrodotoxin, which mimics the sodium cation (positively charged). Under normal conditions, the bond between the cation and the channel is quantified in a nanosecond: when the tetrodotoxin replaces the sodium, the bond persists for 10 seconds. Obviously excessive time. As a result, sodium is denied the possibility of entering the canal, so the membrane action is abruptly stopped.

It has been calculated that the LD50 (mean lethal dose) of tetrodotoxin in mice is equal to 334 μg per kg: in humans, the lethal dose is around 25 milligrams (for a subject of 75 kg), while it is equivalent to 8 μg per kg intravenously.
The poisoning effects of tetrodotoxin are manifested by mild numbness of the tongue and lips, 20 minutes to 3 hours after ingestion of the toxic fish. Later, paresis of the face and lower and upper extremities begins, accompanied by dizziness, shortness of breath, tinnitus, irregular heartbeat, and possibly nausea, diarrhea, and vomiting.
Symptoms of tetrodotoxin poisoning continue with a progressive worsening of the paralysis, followed by movement disorders and breathing difficulties. The patient, at this stage of intoxication, appears pale, registers marked hypotension and difficulty in expressing himself.
In the final stage, the paralysis becomes more and more marked, the affected subject shows convulsions, cardiac arrhythmias and mental imbalances of various degrees.
Death occurs after a fluctuating period (also depending on the quantity ingested) ranging from 20 minutes and 8 hours (on average after 4-6 hours) from the ingestion of the poisoned meat and sometimes, the patient remains conscious until a few moments before to die.
To date, there is still no truly effective antidote; however, a possible antivenin in mice has recently been formulated and is still being tested.
After the ingestion of fish containing the TTX toxin, immediate gastric lavage is necessary and indispensable, followed by the intake of molecules capable of binding the toxin (activated charcoal).
When ingestion of tetrodotoxin is accompanied by a marked reduction in blood pressure, it is recommended to take alpha-adrenergic agonist drug substances in physiological solution intravenously.
It is important to monitor the breath and heartbeat of the intoxicated patient: when necessary, practice artificial respiration and cardiac massage. In case of severity, patients are admitted to intensive care for assisted ventilation.
In the medical field, tetrodotoxin is used to isolate and clone the sodium channel.