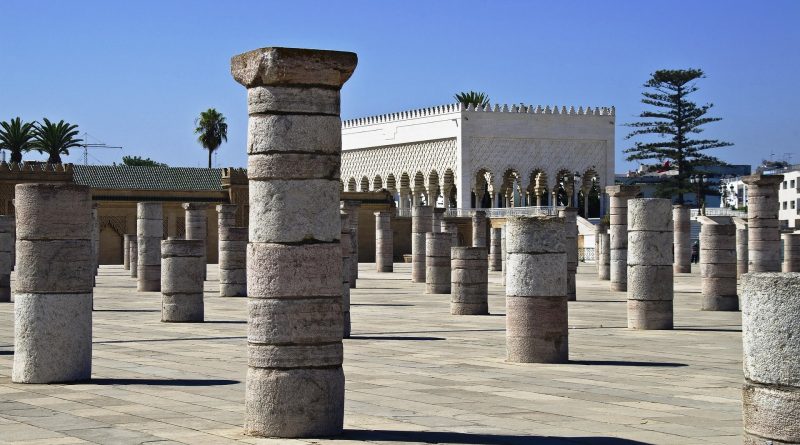 Morocco is a North African state, located at the westernmost end of the region of the Arab world called the Maghreb.
Morocco has a population of 37,123,402 (as of 2014) and its capital is Rabat with 577,827 inhabitants (as of 2014).
The coasts of Morocco are bathed by the Mediterranean Sea and the Strait of Gibraltar in the northern part, by the Atlantic Ocean in the whole stretch to the west, while the land borders are with Algeria alone in the east and south-east, and with Mauritania in south (as Morocco claims its sovereignty over the Western Sahara), as well as with the Spanish exclaves of Ceuta, Melilla and the peninsula of Peñón de Vélez de la Gomera to the north.
Politically, Morocco is a constitutional monarchy.
The country’s official languages ​​are Arabic and Berber (which became official together with Arabic in the new constitution). Arabic is the most widely spoken language in Morocco, as Berber native speakers also know Arabic due to the cult of Islam. French is the second language of the country widely diffused and spoken by a significant part of the population, it is also the prevailing language in administration, economy and teaching.

Geography –
Morocco, located in North Africa, borders Algeria to the E and SE, Western Sahara to the SW and faces the Mediterranean Sea to the NE, the NW and the Atlantic Ocean to the West. It covers an area of ​​458,745 km². The country’s internationally recognized borders are located between latitudes 27 ° and 36 ° N and longitudes 1 ° and 14 ° W. Also considering the Western Sahara, Morocco is mainly located between 21 ° and 36 ° N and between 1 ° and 17 ° W.
Morocco is characterized by the presence of two large mountain ranges: the Rif chain, close to the Mediterranean coast, and that of the Atlas which crosses the whole country from South-West to North-East and has peaks that exceed 4000 m a.s.l. In the southernmost part of Morocco there is the great Sahara desert where the presence of human settlements becomes extremely rare.
Morocco is also marked by the presence of the Atlas mountain range that crosses it diagonally from the north-east, at the northern border with Algeria, to the south-west, where it meets the Atlantic Ocean at the height of the cities of Agadir and Sidi Ifni.
The Atlas mountain range develops through the peaks of the Anti Atlas, which reach a maximum of 2060 m, in the southwest of the country, those of the High Atlas, to which the Jbel Toubkal belongs which with its 4 167 m is the highest in the country and in North Africa, always in the southwest of the country, those of the Middle Atlas in northern Morocco that reach 3350 m of altitude, and those of the Saharan Atlas that reach 1 888 m.
The main rivers of Morocco generally have a course from south to north or north west, following the path that from the Atlas mountains, with their irregular regime, leads them to flow into the Mediterranean Sea or the Atlantic Ocean. When instead they flow south, towards the borders with Algeria they take on the characteristic of seasonal rivers.
Among the major rivers of Morocco we find the Muluia, which originates from the Atlas Mountains, near the city of Midelt, and after about 600 km flows into the Mediterranean Sea, near the border with Algeria; the Oum Er-Rbia river, about 1000 km long, while the longest in the country is the Draa, about 1100 km long. Oum Er-Rbia which is born not far from Muluia, and which heads towards the Atlantic Ocean, where the city of Azemmour stands at its mouth. Another important river in the country is the Sebou, which also springs from the Atlas Mountains and plunges into the Atlantic not far from the city of Kenitra.
In Morocco there are also lakes which, in reality, are few in number and small in size, due to the intensity of evaporation. 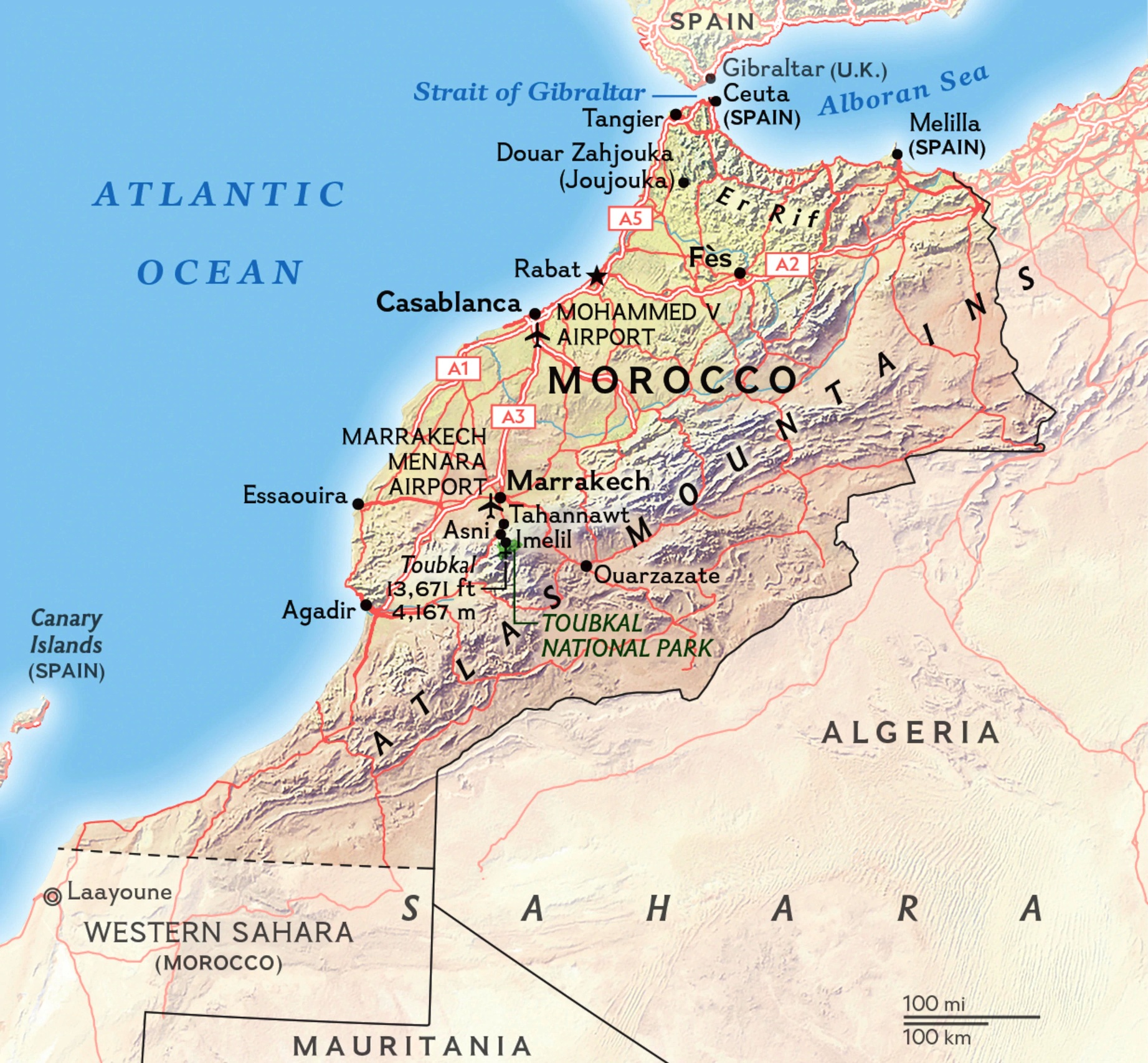 Climate –
The climate of Morocco varies from north to south and, due to its particular morphology, it can divide the country into different climatic micro-areas. The climate of Morocco can be divided into five sub-zones:
– Oceanic;
– Mediterranean;
– Montano;
– Continental temperate;
– Desertic.

Flora –
The flora of Morocco is also affected by different climatic conditions; from the Atlantic to the internal ones and from the variability between north and south.
A typical plant of Morocco is the argan (Argania spinosa); it is a tree of the acacias family, endemic to Morocco: it grows in the south-west, in the coastal region from Essaouira to the Souss plain; from its fruits, with patient beating work, the women of this region obtain argan oil, with beneficial properties and used both in cooking and in cosmetics
Other tree species endemic to Morocco are the thuringen juniper or the Atlas cedar (Cedrus atlantica), known as blue cedar.
The cork oak is a plant that grows in the central-western regions of the Mediterranean and the production of the entire forest system of cork forests (from fodder to wood, aromatic herbs, mushrooms, as well as cork of course) feeds every year a round of business of around 60 million euros.
The date palm reigns in the oases. In Arabic, nakhla is the female palm and dhokkar the male palm: all parts of the palm are used. Oleanders and cacti also color the oases.
In the great south, the flora is essentially composed of cultivated species. In the valley of Drâa and Dadès a flora grows made up of tamarisk, pomegranate, plum, peach and almond trees, grown together with barley and corn. Numerous fruit trees grow in the Ziz valley: oranges, mandarins, pomegranates. In El Kalaâ M’Gouna (province of Ourzazate), on the other hand, roses are grown; the region is known as the “valley of roses”: El Kalaâ M’Gouna is a famous center for the production of rose water, where the “Rose Festival” is also organized. Rose water, also called queen of flowers, is extracted by steam distillation from the petals of the Damask rose, a particularly precious rose and naturally rich in active ingredients.

Fauna –
In the last century, various animal species have become extinct on the Moroccan territory: the Berber lion, the harlequin and the ostrich to name the most famous. However, with the accession of Mohammed VI to the throne, things have radically changed. From the only three parks that Morocco had in 1999, in 2006 the account rises to 10 and in the following decade it rises to 14; to these must be added almost 150 “biological reserves”. Among the most famous parks we mention the Toubkal National Park, which is the oldest (established in 1942) and the highest (4167 m asl), and the Souss-Massa National Park, south of Agadir, established in 1991 .
Today we can find in the desert the fennecs, small foxes, which live in the Sahara desert together with the antelopes that have almost flat hooves so as not to sink into the sand
During the winter, the dunes of erg Chebbi protect Lake Dayet Srli, which attracts hundreds of pink flamingos. From December to March, ornithologists gather in the Valley of the Birds, near Boulmane, in the Dadès region
Unfortunately, according to the International Union for Conservation of Nature (IUCN), almost half of the bird species in Morocco are threatened.