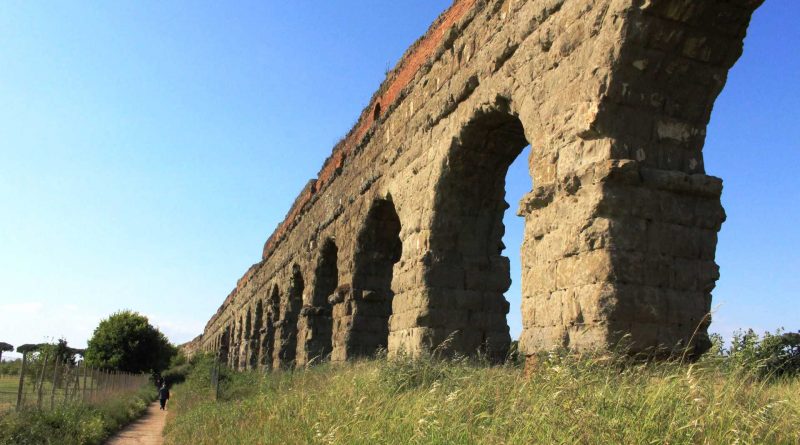 The ancient Romans and agriculture

In ancient Rome, agriculture over time had become a way of life.
This transition was obviously gradual and Ovid testifies to it in the Fasti:
“Ceres was the first to improve human nutrition by replacing acorns with better food.”
In fact, it seems that the first Romans ate on acorn flour, the most abundant food, since oak woods abounded in Rome, until by divine advice (we are in the matriarchal era and the priestesses advised for inspiration and oracles), they decided to cultivate the cereals until then in the wild.
Spelled was the most used cereal but Ceres (Latin: Cere, from which the term cereal derives) held a bundle of ears of wheat in his hand, and so did the Goddess Opi, for which it was certainly cultivated immediately, but only later did it he realized it was the most nutritious and healthiest cereal.
Cicero considered agriculture to be the best of Roman occupations. In his treatise On duties, he declared that: ‘among the occupations in which the gain is assured, none is better than agriculture, neither more profitable, nor more pleasant, nor more suited to the free man.’ When one of his clients was mocked in court for preferring a rural lifestyle, Cicero defended country life as a ‘teacher of economics, industriousness and justice’ (thrift, diligentia, iustitia).
It is also remembered that Cato, Columella, Varro and Palladio wrote manuals on agricultural activity.
The basic cultivation in ancient Rome was wheat and bread was the basic food of every Roman table.
In his treatise De agricultura (“On agriculture”, 2nd century BC), Cato wrote that the best production was the vineyard, followed by: an irrigated garden, a willow plantation, an olive grove, a pasture, a wheat field, forest trees, a vine supported by trees, and finally a wood of acorn trees.
Although Rome relied on the produced resources of its many provinces obtained through wars and conquests, the wealthier Romans developed the lands in Italy to produce a variety of products. “The population of the city of Rome constituted a large market for the purchase of food produced on Italian farms”.

Land ownership –
Land ownership was a determining factor in the distinction between the aristocracy and the plebs, and the more land a Roman owned, the more important it would be in the city. Soldiers were often rewarded with land from the commanders under whom they served. Although farms depended on servile labor, free men and citizens were hired to supervise the slaves and ensure the farm ran smoothly.
Archaic Rome was founded on small landed property. According to tradition, Romulus had assigned each citizen a plot of two iugeri (half a hectare); later the land assigned to the Roman soldier was seven yugeri.
When Rome began to conquer lands across the border, these became “agro-public”.
A part of this land was divided into centuries and assigned to soldiers to ensure their subsistence. Other lands were leased to private individuals who cultivated them and passed them on as an inheritance, but the property remained state owned. The word Agriculture derives from agro and culture.
Naturally the military commanders, until Caesar only aristocrats, had the largest lands, which they could make work by colonists and slaves.
The Roman Senators could not be traders, a category reserved for equites, who imported and exported goods across the border, so their only investments were in land, thus hoping to limit their craving for riches. But of course this craving was not appeased by the laws either.
In fact, after the Punic wars, the Senators circumvented the law with various artifices that forbade occupying more than 500 iugeri (100 hectares) of public agro-agriculture, buying large estates, that is, enormous agricultural territories, cultivated by slaves.
With the agricultural law of 111 a.c. the public agro became private, becoming a real income for the landowners by now. The rustic villas were thus transformed into sumptuous suburban villas, and the fields were transformed into large pastures with herds or flocks to be entrusted to slave-shepherds, who would guide them in the transhumance towards the Adriatic or the Tyrrhenian Sea.
During the 5th century BC, the lands were divided into small family-owned plots. The Greeks of the period, however, had begun to use crop rotation and to have large estates. The Roman contacts with Carthage, Greece and the Hellenistic east, improved the methods of Roman agriculture, which reached its peak in production and efficiency between the late age of the republic and the beginning of the Roman Empire.
It is known that the size of farms in Rome could be divided into three categories. Small landholdings could have from 18 to 108 iugeri, where one iugero was equivalent to about 0.65 acres or a quarter of a hectare. The medium-sized properties had between 80 and 500 yugeri. The large estates (called latifundia) had over 500 yugeri.
In the era of the late republic, the number of large estates increased. Wealthy Romans bought land from plebeian peasants who could no longer earn a living; in fact, from 200 BC, the Punic Wars called plebeian peasants to arms for long periods of time. 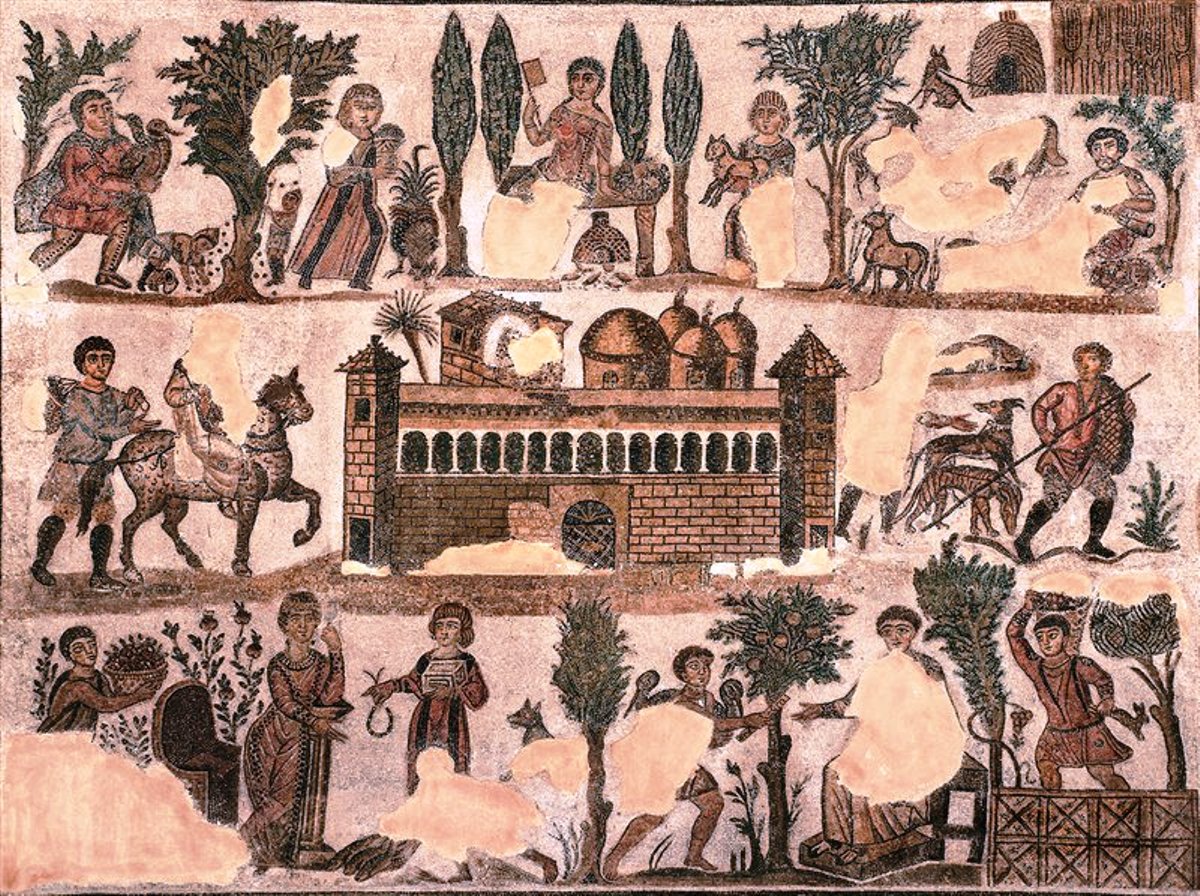 Land management –
The Romans used four methods of managing agricultural land:
– direct work performed by the owner and his family;
– land rented to third parties or sharecropping, which consisted in the division of the products between the owner and the sharecropper;
– work performed by slaves owned by aristocrats and subjected to continuous supervision;
– other arrangements in which the land was leased to a farmer.
In this regard Cato the Elder (also known as Cato the Censor) was a politician and statesman of the second half of the Roman republican age and described his point of view on how a plot of land of 100 yugeri should be managed. He argued that such a farm should have: “a foreman, the foreman’s wife, ten laborers, an ox driver, a donkey driver, a man in charge of the willow grove, a swineherd, for a total of sixteen people; two oxen, two donkeys for the carriage of the wagons, a donkey for the work in the mill. ” He also said that a farm should have: “three fully equipped presses, jars in which to collect five harvests, for an amount of eight hundred cradles, twenty jars for the storage of waste from wine presses, another twenty for grain, and separate covers. for the jars, six amphorae half covered with fibers, four amphorae covered with fibers, two funnels, three wicker strainers, [and] three strainers to dip into flowers, ten jars for [treatment] of grape juice. . “
In the Roman Empire, a family of 6 had to cultivate 12 yugeri / 3 hectares of land to be able to satisfy the minimum nutritional need (without animals). If the family owned animals to help cultivate the land, then 20 iugeri were needed. The same amount was needed for subsistence if the land was cultivated using the sharecropping method, as in 2nd century AD Proconsular Africa, in which case one third of the total crop went to the owner as rent payment (see Lex Manciana) .
As for the manpower, most of the work was done by servants and slaves. Slaves were the main workforce. In Roman society, there were 3 methods of obtaining a slave. The first, and possibly the most common, method of obtaining a slave was to buy one at the market. Slaves were bought at auctions and bought from slave traders or traded between slave traders. Another method in which slaves were acquired was through conquest in warfare. As Keith Hopkins explains in his writings, many owners went to war and returned with prisoners. These prisoners were then brought back to Roman territory and were then sold to another citizen or made to work on the farm of the one who had imprisoned them. The last method of obtaining a slave was through birth: if a slave gave birth to a child, that child became the property of that slave’s owner. Slaves were relatively easy to use because they were considered property; their treatment depended on the humanity of their owners, who met the needs of their slaves with what they wanted to spend, not what they owed. Supervisors motivated slaves by imposing punishments and bestowing rewards. ‘If the supervisor opposed the crimes, they would never do them again; if he instead let him allow, the master should not let him go unpunished. ‘ although total cruelty to slaves was considered a sign of bad temper in Roman culture, there were few limits to the punishments that a slave supervisor or owner could inflict.