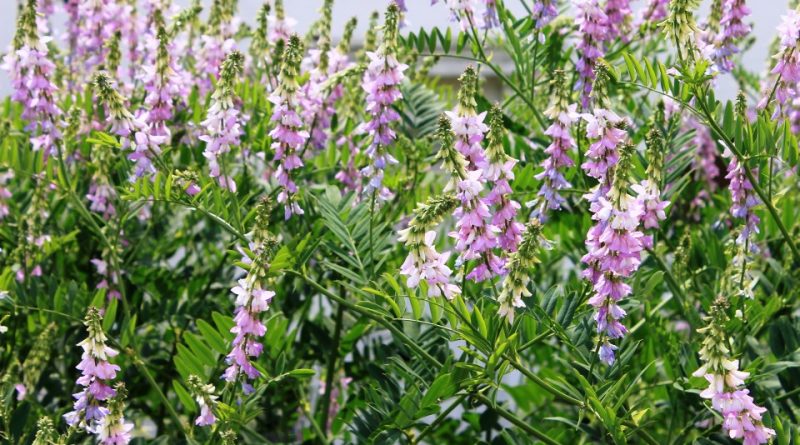 The Goat’s Rue (Galega officinalis L.) is a herbaceous species belonging to the Fabaceae family.

Etymology –
The term Galega comes from the Greek γάλα gala latte and from ἄγω ago move, stir: for the alleged property of favoring the production of milk.
The specific epithet officinalis comes from a medieval laboratory workshop: as a plant usable in pharmaceuticals, herbal medicine, liqueurs, perfumery and the like.

Geographic Distribution and Habitat –
Galega officinalis is a plant native to the Middle East, but has been naturalized in Europe and western Asia.
In Europe it is present from France to Spain, from the east through Poland to the south-east of Russia, through Italy to Greece, Turkey and Azerbaijan. In Africa it is present in the northern area, in Morocco and Algeria.
The plant is widely distributed in the temperate regions of the world, mainly in Europe. It is also found in South America, Pakistan and New Zealand.
This plant was introduced in 1891 in the United States for potential use as a forage crop, but it escaped cultivation and is now considered an agricultural weed, so it has been placed on the Federal Noxious Weed List in the United States.
Its habitat is that of scrubs, woods, marshy fields and roadsides where it grows best in humid conditions such as river banks and wet meadows; at altitudes up to 1,600 meters. 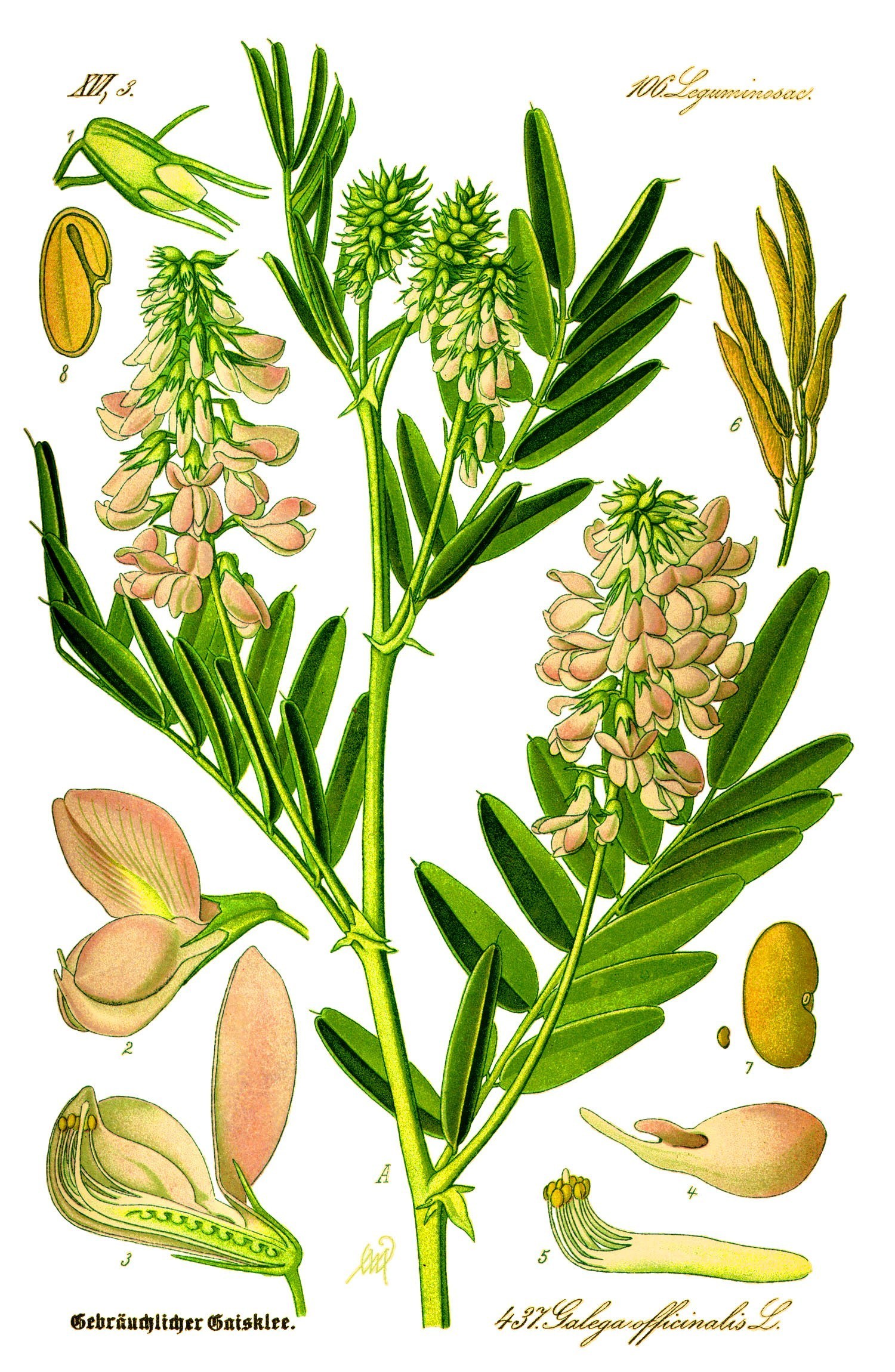 Description –
Galega officinalis is a perennial herb that grows up to 1.2m by 0.8m at a high speed.
The leaves are compound.
The flowers are light blue or pink.
The antesis is between May and most of the summer.
The fruit is a sub-cylindrical legume, 20-40 x 3 mm, patent, glabrous, restricted between the seeds, indehiscent or late dehiscent, with 2-6 seeds of 4 x 1.7-2.2 mm, reniform-sub-cylindrical, smooth, brown, yellowish or reddish-brown.

Cultivation –
Galega officinalis is a perennial herbaceous plant that grows spontaneously in humid but sunny soils.
It is a plant that grows well even in poor soils and is tolerant even in the presence of salinity.
Under certain conditions it can become an invasive species.
This species has a symbiotic relationship with some soil bacteria, these bacteria form nodules on the roots and fix atmospheric nitrogen. Some of this nitrogen is used by the growing plant, but some can also be used by other plants growing nearby.
Propagation occurs by seed; this has a hard coat and benefits from scarification before sowing to accelerate and improve germination. This can usually be done by pouring a small amount of nearly boiling water over the seeds (being careful not to cook them) and then soaking them for 12 – 24 hours in warm water. By now they should have absorbed the moisture and swelled; if they haven’t, then carefully make a nick in the seed coat (being careful not to damage the embryo) and soak for another 12 hours before planting.
Sowing can be done by broadcasting or in seedbeds. In this case, when the seedlings are manageable, they can be transplanted in spring-summer to their permanent positions.
If you have enough seeds, you can sow outdoors in situ from mid to late spring.
The seed can remain viable for at least 10 years.
Propagation can also occur by division of tufts in spring or autumn. In this case the larger clumps can be replanted directly into their permanent positions, although it is best to arrange the smaller clumps and grow them in a cold greenhouse until they take root well; then transplanting them in spring.

Customs and Traditions –
Goat’s Rue is a plant that has a long history of use and has often been cultivated for this purpose in the past. It is still used in herbal medicine but now it is mostly collected spontaneously.
The parts of the plant that contain the properties are the dried flowers and seeds. The main properties of Galega are:
– galactogoghe (increased production of breast milk);
– well-being of the breast circulation;
– diuretic.
Galega can be found in different types of preparations: tincture, powder and decoction. However, the most common and oldest preparation that has always been used is that of galega herbal tea.
It was once important in the treatment of plague, fevers and infectious diseases and for snake bites. Today it is used in modern herbal medicine, mainly, for its effect in promoting the flow of milk in nursing mothers and for its positive effect on the digestive system.
In ancient times it was also used inside the forage for animals in order to stimulate the production of milk.
The plant contains galegine, an alkaloid that strongly reduces blood sugar levels making it useful in the treatment of diabetes.
Galleons are substances with hypoglycemic activity and are the basis of the discovery of metformin, a treatment for the management of the symptoms of diabetes mellitus.
Although it has not been studied in depth, the plant contains, in addition to galegin, hydroxygalegine, various derivatives of guanidine, such as flavones 4-hydroxygalegine, flavones glycosides, kaempferol and quercetin.
Among the side effects, it should be remembered that the intake of parts of this plant can interfere with the prescribed antidiabetic drugs, the absorption of iron and anticoagulants. It can cause headaches or muscle weakness, and its safety during pregnancy or breastfeeding is unknown.
Galega officinalis is also used for food purposes.
The leaves can be eaten cooked like spinach.
Some caution is advised for some of its toxic effects.
The herb is also used as a substitute for rennet in milk.
Other uses of this plant are agroforestry ones. It is in fact a fast-growing plant, which produces a good harvest of green manure, enriching the soil with organic matter and also fixing atmospheric nitrogen. The plant has potential use as a natural fertilizer on saline soils.
The plant has been widely cultivated as a fodder, ornamental, bee-pollinated plant and as a green manure.

Preparation Method –
The plant is harvested as soon as it has bloomed and can be dried for later use.
Infusions can be prepared. For this preparation, 20 grams of dried plant are needed per liter of water. Boil the water and leave the plant to infuse for about 15 minutes, before filtering and drinking. You can take up to 5 cups a day but usually 2-3 are recommended.
A further use is that of the decoction. Boil a liter of water with 30 grams of dried seeds inside, then let it cool and filter. You can drink 2 or 3 cups a day.
Another preparation is that of the mother tincture. Of this, 30 drops are generally taken before meals, therefore 3 times a day. However, if you want to try it to take advantage of its effect on blood sugar, always ask your doctor for advice first.
Gallega is also sold in the form of a practical supplement to use as it is sufficient to take one or more tablets with a little water as needed. Depending on the brand, the indications for use and doses may be different.
In the need to increase milk production, 1 to 3 cups of galega tea can be taken per day. Instead, it is better to avoid the mother tincture that contains alcohol or the actual supplement, unless otherwise indicated by the doctor.