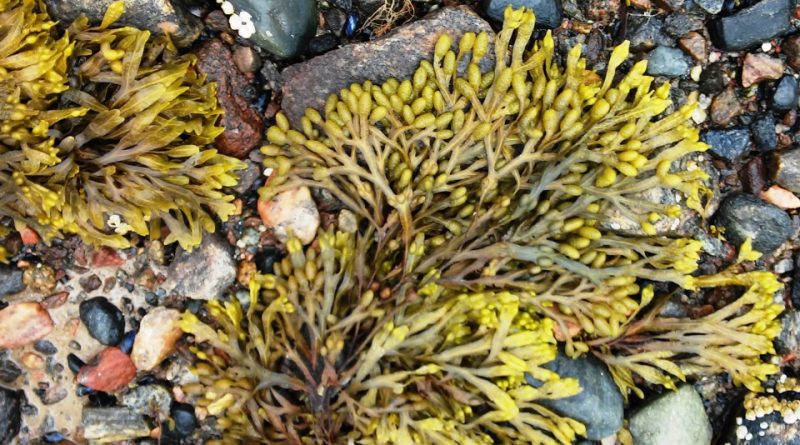 The bladder wrack (Fucus vesiculosus L.) is a brown sea alga belonging to the Fucaceae family.

Etymology –
The term Fucus comes from the Greek phukos “sea alga”, of Semitic origin.
The specific epithet vesiculosus means swollen, vesicular, lumpy, bladder-like because it is covered with blisters.

Geographic Distribution and Habitat –
Fucus vesiculosus is an alga found on the coasts of the North Sea, the western Baltic Sea and in the Atlantic and Pacific oceans.
In particular, it is present on the shores of the British Isles, on the Atlantic coasts of Europe, northern Russia, the Baltic Sea, Greenland, the Azores, the Canary Islands, Morocco and Madeira. It is also found on the Atlantic coast of North America from Ellesmere Island, Hudson Bay to North Carolina.
From the habitat point of view, the species is particularly common on the coasts sheltered by the average shoreline at the lower intertidal levels. It is rare on exposed banks where specimens can be short, stunted and free of air vesicles. 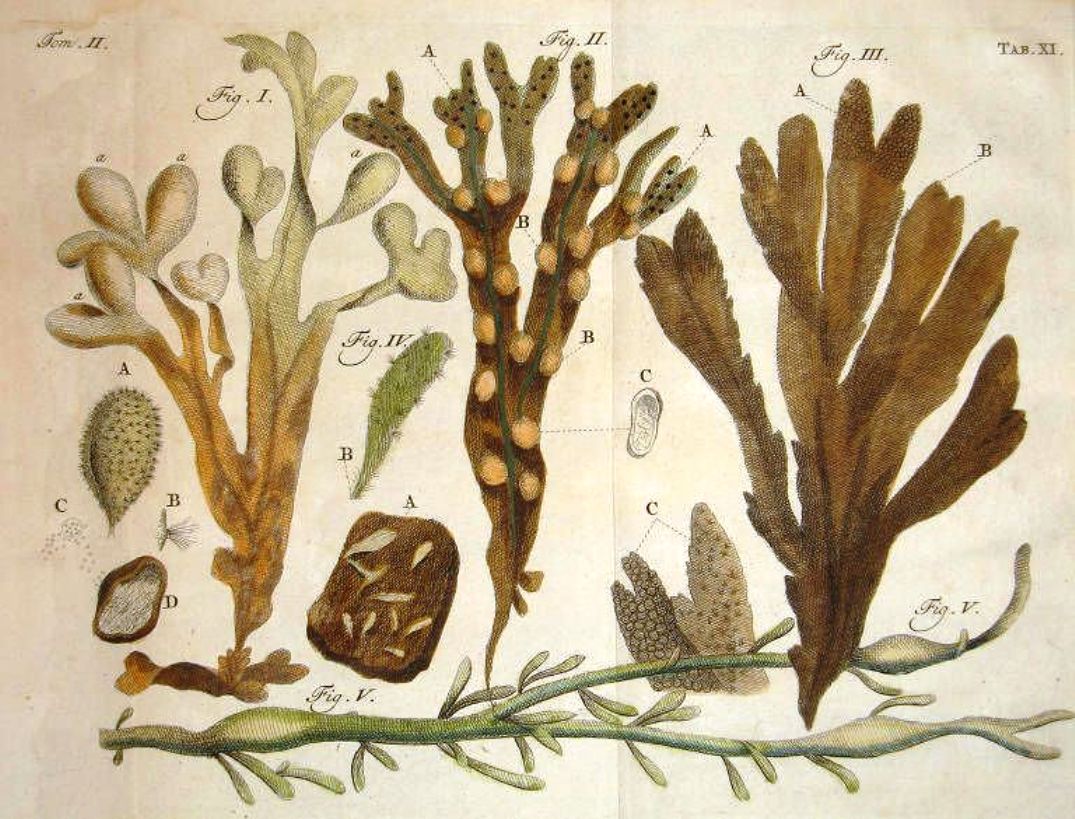 Description –
Fucus vesiculosus has fronds that grow up to 90cm in length and 2.5cm in width, with a prominent midrib.
It is a dioecious species.
The seaweed is fixed by means of a disc-shaped basal support. It has nearly spherical air chambers that are usually paired, one on either side of the central rib, but may be absent in young plants.
The margin is smooth and the frond is dichotomously branched. Sometimes this alga is confused with Fucus spiralis with which it hybridizes and is similar to Fucus serratus.

Cultivation –
This alga generally releases gametes into seawater in calm conditions and the eggs are fertilized externally to produce a zygote. The eggs are fertilized shortly after they are released. A study on the coast of Maine showed that there was 100% fertilization in both exposed and sheltered sites. Populations continuously submerged in the Baltic Sea are very sensitive to turbulent conditions. Interestingly, high fertilization success is achieved because gametes are only released when the water velocity is low.
There is also an asexual reproduction which is obtained by the production of adventitious branches which detach and re-attach to the bottom through the formation of rhizoids, although this type of reproduction has never been reported outside the Baltic Sea.

Customs and Traditions –
This seaweed is used for numerous health benefits. Obviously, it is not recommended for all people, due to the high iodine content. It is not recommended for pregnant women. It is also not recommended for people with thyroid disorders and hypertension, as well as for people with bleeding problems or who need to undergo surgery.
In fact, it was the original source of iodine, discovered in 1811, and was widely used to treat goiter, a swelling of the thyroid gland related to iodine deficiency.
It is also used for many other applications.
Fucus extract can reduce blood glucose levels. Therefore, it can be helpful with diabetics.
This alga contains the components fucoidanos, alginic acid and laminaran which are and are anticoagulants. The latter can help reduce plasma cholesterol levels.
The primary chemical constituents also include mucilage, algin, mannitol, fucitol, beta-carotene, zeaxanthin, volatile oils, iodine, bromine, potassium and other minerals.
Furthermore, iodine deficiency is the most frequent cause of hypothyroidism. In this way, the intake of this seaweed, very rich in iodine, helps to regulate it.
It helps in weight loss and reduces the urge to eat as fucus provides magnificent support for the thyroid gland when it is insufficient. The iodine in fucus can lead to weight loss or, at least, to its control. This seaweed is also recommended for reducing food cravings, since it has a high mineral content. In addition, it has the ability to eliminate appetite and has a satiating effect.
From an ecological point of view, Fucus vesiculosus supports few colonial organisms but provides a shelter and shelter for the tubular worm Spirorbis spirorbis, herbivorous isopods such as Idotea and surface grazing snails such as Littorina obtusata. The phlorotannins present in Fucus vesiculosus act as chemical defenses against the herbivorous marine snail, Littorina littorea, while the galactolipids act as herbivorous deterrents against the sea urchin Arbacia punctulata. Methyl jasmonate can induce the production of phlorotannins. Fucoflorethol A is a type of phlorotannin present in F. vesiculosus.
Among the contraindications and side effects it should be noted that the consumption of F. vesiculosus can cause platelet inhibition which can enhance the anticoagulant activity of some drugs and, moreover, as mentioned, should be avoided before surgery.
Some people may suffer from an allergic reaction to the iodine present in F. vesiculosus.

Preparation Method –
Fucus vesiculosus is sold as a food supplement.
It should be noted that this seaweed is not appreciated by everyone due to its taste and can be very difficult to swallow.
The best option for consuming these algae is to take a food supplement. Finally it is emphasized that, Although Fucus has numerous health benefits, as mentioned above, it is not recommended for everyone. Therefore, before taking these algae, it is advisable to ask your doctor.