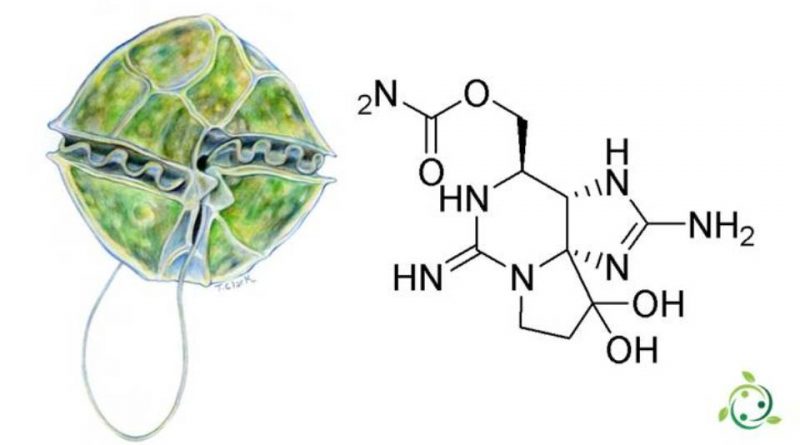 Saxitoxin, whose term in the official IUPAC nomenclature is: [(3aS, 4R, 10aS) -10,10-dihydroxy-2,6-diiminooctahydro-1H, 8H-pyrrole [1,2-c] purin-4-yl ] methyl carbamate is an alkaloid.
Saxitoxin has a brute or molecular formula: C10H17N7O4 and is a water-soluble neurotoxin produced in nature by some species of marine dinoflagellates (Alexandrium sp., Gymnodinium sp., Pyrodinium sp.) And freshwater cyanobacteria (Dolichospermum cicinale sp., Some Aphanizomenon spp. ., Cylindrospermopsis sp., Lyngbya sp., Planktoth).
Additionally, saxitoxin has also been found in at least 12 species of marine puffer fish in Asia and in one freshwater fish tilapia in Brazil.
Of the more than 20 toxic agents responsible for paralytic syndrome due to bivalve molluscs (PSP), saxitoxin is one of the most potent, along with neosaxitoxin and gonyautoxin.
Saxitoxin is characterized by the presence of two positively charged guanidine functional groups. Through these groups it binds firmly and blocks the sodium channel, interacting with an ionized carboxylic group (COO-) placed at the entrance of the channel, on the cytosolic side.
Saxitoxin is a toxin that causes intoxication by ingestion causing a variety of symptoms, which depend on the amount of toxin taken, especially at the neurological level, including tingling, paraesthesia in the mouth, lips, tongue and extremities of the limbs, profound muscle weakness, inability to keep upright, ataxic gait. Gastrointestinal symptoms are possible but less common.

The symptoms of its ingestion are quite rapid so that in the first 5 – 30 minutes there is already hypothermia and tingling of the oropharyngeal area. In less than an hour, the tingling spreads to the whole body. Death, in fatal cases, occurs after 3–12 hours and is caused by respiratory paralysis. Patients who survive the first 12 hours usually recover quickly with no side effects. As no antidotes are known, the treatment applied is symptomatic and consists of gastric lavage (if necessary) and artificial respiration.
Saxitoxin is a thermostable substance and does not degrade with normal cooking of food but only after hours of boiling at pH 3.
Saxitoxin was initially isolated and characterized by military research by virtue of its extremely low LD50 and therefore as a possible use as a chemical weapon.
In the past, it was considered for military use by the United States.
Fortunately, saxitoxin turned out to be a valuable research tool in the study of the cell and the function of sodium channels.