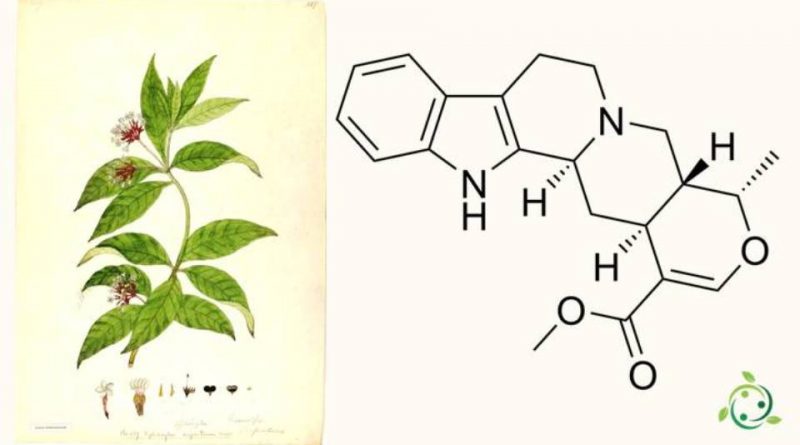 Raubasine (or also ajmalicin or δ-yohimbine) whose term in the official IUPAC nomenclature is: methyl ester of (19α) -16,17-didehydro- 19-methyloxayohimban-16-carboxylic acid is an alkaloid.
This substance has a brute or molecular formula: C21H24N2O3 and is a molecule contained in some plants such as Rauvolfia (Rauvolfia serpentina (L.) Benth. Ex Kurz) which is a plant of the Apocynaceae family and one of the 50 fundamental herbs of traditional Chinese medicine , in which it takes the name of shégēn mù (蛇 根 木) or yìndù shémù (印度 蛇 木).
Raubasine has a vasodilating action which manifests itself with increased peripheral blood flow and mild hypotension. This action would be the result of three mechanisms: the first of the relaxing type directed on the smooth muscles of the arterial vessels; the second of the sympatholytic type, ie a blocking effect on the adrenergic receptors (alpha-1-antagonist action) and the third as an inhibitory effect on the bulbar vasomotor centers.
Raubasine also has a certain antiplatelet action.
Raubasine is used in the therapy of peripheral arteriopathies, angina pectoris, cerebral arteriosclerosis. Furthermore, it also shows efficacy in diseases of the venous system. It appears to have a favorable effect on fracture edema.

Finally, it should be noted that raubasine, in association with almitrine, has shown efficacy in the treatment of cognitive impairment in elderly patients and in those with a personal history of cerebral ischemic insults.
Among the side effects and possible contraindications, it is highlighted that raubasine should not be taken by subjects with known hypersensitivity to the active ingredient or to any of the excipients of the pharmaceutical formulation. Furthermore, its use is not recommended in morbid conditions in which circulatory conditions make it inappropriate to consider an increase in cardiac work, such as in conditions of severe heart disease or insufficiency of the cardiovascular system.
Raubasine is also contraindicated during the first three months of pregnancy while in the following trimesters it can be administered only after careful evaluation and medical indication.