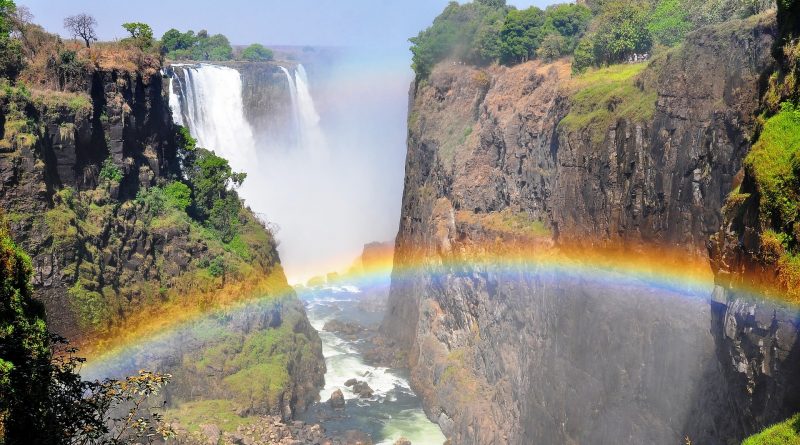 Zambia is a state with an extension of 752,614 km² and a number of inhabitants in 2005 of 11,668,000 inhabitants, located in central-southern Africa.
Zambia borders to the north with the Democratic Republic of Congo, to the north-east with Tanzania, to the east with Malawi, to the south with Mozambique, Zimbabwe, Botswana and Namibia, and to the west with Angola; furthermore, Zambia is landlocked.
From a political point of view, Zambia is a presidential republic within the Commonwealth, a member of the United Nations and the African Union and with an official language of English.
The capital is Lusaka with 1,267,440 inhabitants as of 2018.

Geography –
Zambia is characterized by a rather uniform geographical and morphological aspect. Its territory is mainly made up of plateaus, ranging from 1000 m (center-south) to 1300 m (north) and which slope south-west into the Zambezi basin.
While the western part of the country is characterized by vast alluvial plains, flooded in the rainy season (period from October to April), the eastern part is arid and characterized by the presence of a savannah rich in shrubs.
To the north-west rise the Muchinga mountains, which exceed 1800 m and are the natural watershed between the Zambezi and Congo river basins. The highest peaks are found in the Nyika Mountains on the border with Malawi, which reach 2164m.
Furthermore, Zambia includes two large river basins: that of the Zambezi (to the south) and that of the Congo River (to the north).
In the Zambezi basin, in addition to the Zambezi, the main rivers are the Kafue, the Luangwa and the Kwando. The Kwando forms the southeastern border with Angola, then heads east along the northern border of the Caprivi Strip. The Zambezi flows into the Kwando and then flows east, forming the border between Zambia and Zimbabwe. Kafue and Luangwa are the two main tributaries of the Zambezi. Before converging into the Zambezi, the Luangwa forms part of the border with Mozambique. The Victoria Falls, formed by the Zambezi, are among the most impressive in the world, with a width of 1.6 km and a height of 100 m. Downstream of the falls, the Zambezi forms Lake Kariba. Subsequently, the river crosses Mozambique and flows into the Mozambique Channel (Indian Ocean).
The Congo Basin in Zambia includes the two great rivers of the Chambeshi and the Luapula. The first forms the border between Zambia and the Democratic Republic of Congo, and discharges into the wetlands of Lake Bangweulu, from which the Luapula is formed. The Luapula flows west and then north, forming Lake Mweru together with the Kalungwishi River. Also in the Congo basin is Lake Tanganyika; one of its major tributaries is the Kalambo, which develops on the border between Zambia and Tanzania and forms the Kalambo Falls, the second highest uninterrupted waterfalls in Africa after those of Tugela (South Africa). 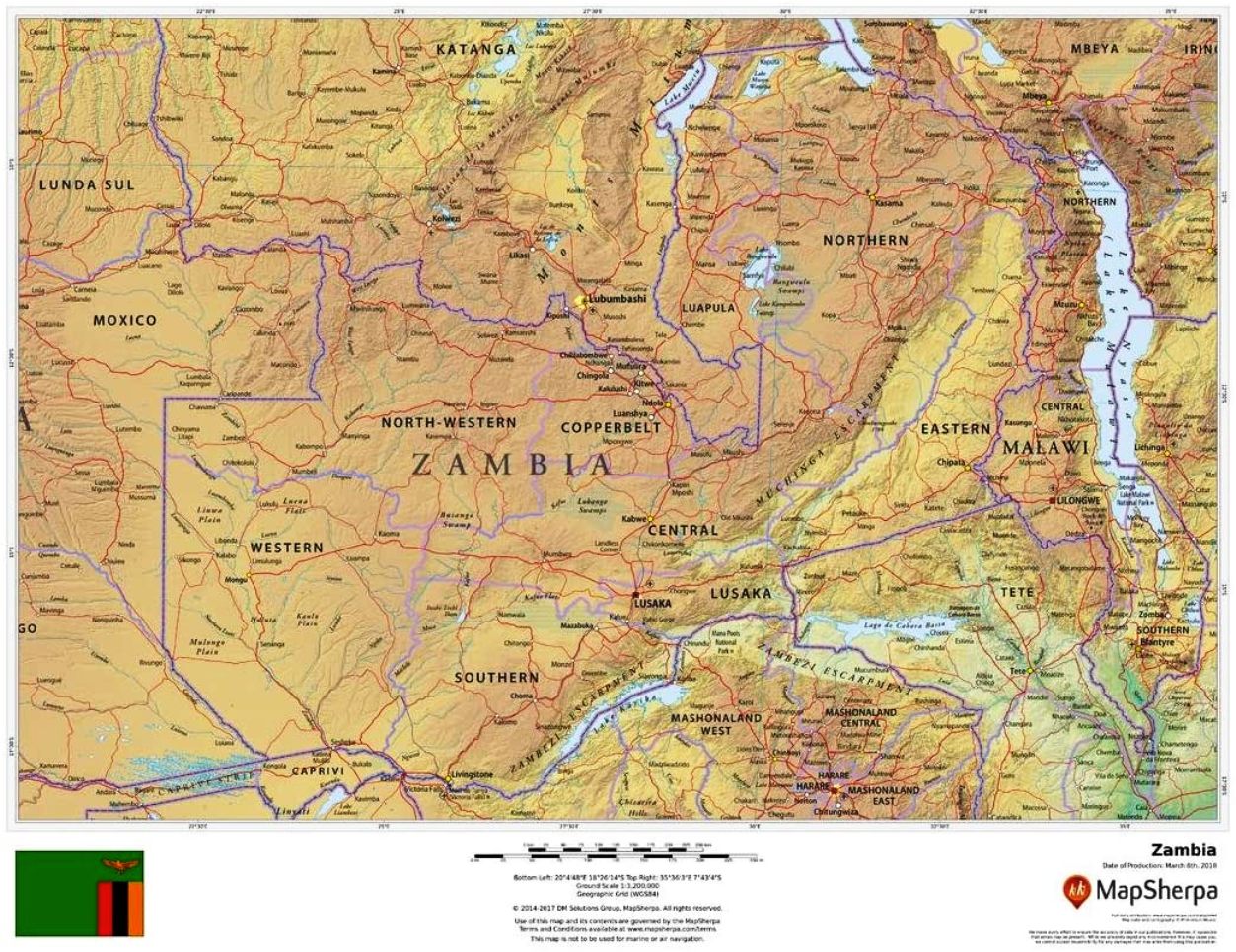 Climate –
Zambia is characterized by a tropical climate with most of the territory benefiting from relative climatic homogeneity, thanks to the extensive plateaus that characterize its orography. In fact, between 900 and 1200 m during the dry season, from May to November, the climate is mild. The day / night temperature range varies discreetly only in the presence of night rains, between December and May. But only between June and August can the temperature go from 5 degrees at night to 30 degrees during the day. Also on the highlands, relative humidity is very low, even during the rainy season. In fact, two hours of sunshine are enough to reabsorb it. The rains are concentrated during the summer and increase from south to north. the average temperatures (18 ° C in July and 24 ° C in January) are mitigated by the altitude even if the strong continentality causes considerable daily temperature variations. The conditions are not the same in the depressions, at heights below 500 m. These are the great valleys of the Luangwa to the east, the Zambezi (the fourth longest African river) to the west and those of Lake Kariba to the south, formed by the expansion of the river, barred by an imposing dam at Siavonga. In these valleys, during the rainy season, the air can be really heavy, but during the dry season the climate is pleasant and all the creatures of the savannah gather near the waterways.

Natural heritage –
In Zambia we find an important portion of the equatorial forest that is present in the north, in the wettest areas and along the course of the Zambezi. Numerous national parks, including the Kabue, protect the rich wildlife heritage. The reliefs (hills and mountains) are rare and of modest heights.

Flora –
Most of the territory of Zambia is a plateau and the prevailing type of vegetation is open wood or savannah. Acacia and baobab trees, thorny trees and bushes, and tall perennial grasses are common, which become coarser and more sparse in the drier areas to the south. A thin forest grows in the north and east. The southwest has Zambian teak forests (Baikiaea plurijuga).

Fauna –
National parks and game reserves, such as Kafue National Park, preserve the fauna threatened by the settlements. Cookson’s wildebeest, Senga Kob, Thornicroft giraffe, and red lechwe are unique to Zambia. The many varieties of buck include kudu, impala, duiker, and sten. Giraffes, zebras, rhinos, elephants, baboons, monkeys, hyenas, wolves and lions can be found in the Luangwa Valley. Among the nocturnal animals are the serval cat and the civet, the genet and the jackal. Other mammals include the honey badger, ant bear, rock rabbit, wart pig, and bush pig.
Zambia is also rich in birds, including eagle, seagull, tern, kingfisher, swift, red wing, lark, chatterbox, sunbird, weaver, red-billed quelea ( in Luangwa Valley), stork, goose, plover, wagtail, sparrow, swallow, thrush, shrike, nightingale, dove, nightjar and occasionally ostrich. In the game reserves are found the white pelican, flamingo, heron, ibis and crowned crane.
In addition, more than 150 recorded species of reptiles live in Zambia, including 78 species of snakes and 66 species of lizards. Among them are the crocodile, the tortoise, the gecko, the agama, the non-poisonous python, the mamba, the viper. The range of fish species is also wide and includes sea bream, snout fish, butterfish, tiger fish, bottlenose fish, throat fish, mudfish, catfish, barbel, “vundu”, squeaker, whitebait, perch, carp, sea bass and “utaka” (of sardines).
There are thousands of types of insects and many are unique to the area. The Copperbelt region and the swamps of Lake Bangweulu are particularly rich in insects.