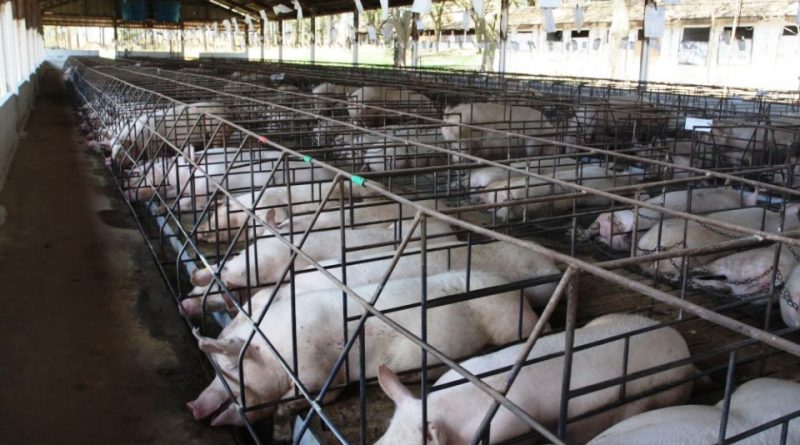 I do not believe that the civilization in which we live and of which each of us is an integral part, with his actions and his conscience, can absolve itself in the face of unacceptable behaviors and, often, silences.
Human history is strewn with flowers and thorns; of art, poetry, spirituality but also of the most incredible atrocities.
Wars and death continue to claim victims and suffering; wars and abuses for domination, power, the hoarding of energy sources, food and water.
But there is a war that passes before our eyes and enters our homes, on our plates and of which, aware or unaware, we are direct or indirect architects and executioners.
Beyond the supporters of vegetarian or vegan culture, even those who use meat in their diet can no longer eat without food awareness.
One cannot feed on sentient beings if they have had to live a life of suffering and incredible atrocities.
We cannot continue in this direction, of the civilization of well-being, if our well-being is paid dearly and bitterly by other beings on the planet.
And this is what happens, all over the world, today more than ever in the most deafening silence of most of us, civilized women and men.

World data –
Approximately 70 billion animals are bred on the civilized planet Earth every year. Of these, two out of three animals are raised with intensive methods. Always kept indoors, in cages, crammed or in confined spaces. Treated like production machines instead of sentient beings as they are.
Globally, 70% of poultry meat, 50% of pork, 40% of beef, 60% of eggs, are produced in intensive farming. In Italy 85% of chickens are intensively reared, over 95% of pigs live in intensive farms, almost all dairy cows do not have access to pasture.
Intensive farming is known to disrupt the link between land and animals: they remove animals from pasture and instead herd them in muddy sheds and enclosures.
Intensive farming is the biggest cause of animal abuse on the planet, yet there is still talk of animal welfare on farms.
If this were not already too much, animals raised with the “industrial” method are usually fed with edible foods such as cereals, soy or fish that could feed humans instead.
On the other hand, out of a world population of 7 billion people, about 1 billion of them suffer from hunger. The global population is projected to grow to 9 billion by 2050.
If today we reconverted these “farms of death and suffering” and planted all the crops used to feed intensively farmed animals in a field, we would come to cover the entire surface of the European Union, or half of the United States.
The data tells us that one third of the world’s grain harvest is used to feed industrial livestock; if this were used directly for human consumption it would feed about 3 billion people. In addition, nearly all of the world’s soybean production is fed to industrially farmed animals in the form of soybean meal. If given to people instead, it would feed a billion.

Economy and climate –
The crude and non-mitigating analysis tells us that industrial farms do not produce food, they waste it. For every 100 calories of edible grain used as livestock feed, we only get 30 calories in the form of meat or milk; a loss of 70%.
In addition, factory farming drives up food prices by increasing the demand for staple foods such as grains at a time when global supply capacity is shrinking. Suffice it to say that, among others, more than a third of the global catch never reaches our tables; a large part of it is destined to feed farmed fish, pigs and poultry. In addition, around 40% of all fish consumed by people around the world is now farmed and is not included in the aforementioned figure of 70 billion animals.
In this food chain, which stems from the same materialistic ideology that generated the ugliness of Auschwitz, world wars and human genocides, 2 to 5 tons of wild fish are needed to produce 1 ton of farmed carnivorous fish such as salmon, trout and halibut.
This “food custom” means that in the world one third of food is wasted. This food makes up 28% of agricultural land, worth $ 750 billion; to be clear as much as the GDP of Switzerland (which is not a little).
But it is worse than making animals suffer, we make their suffering useless; in fact, in the world every year we waste an amount of meat corresponding to 12 billion farmed animals, for a value of 486 billion dollars.
In addition, an area of ​​forest equal to half of Great Britain is cut down every year, mainly to grow animal feed and raise livestock.
Last but not least, worldwide the livestock industry contributes 14.5% of man-made greenhouse gas emissions: a figure that is greater than all our cars, planes and trains combined.
With intensive farming as a driving force, the number of animals raised is set to double by 2050. 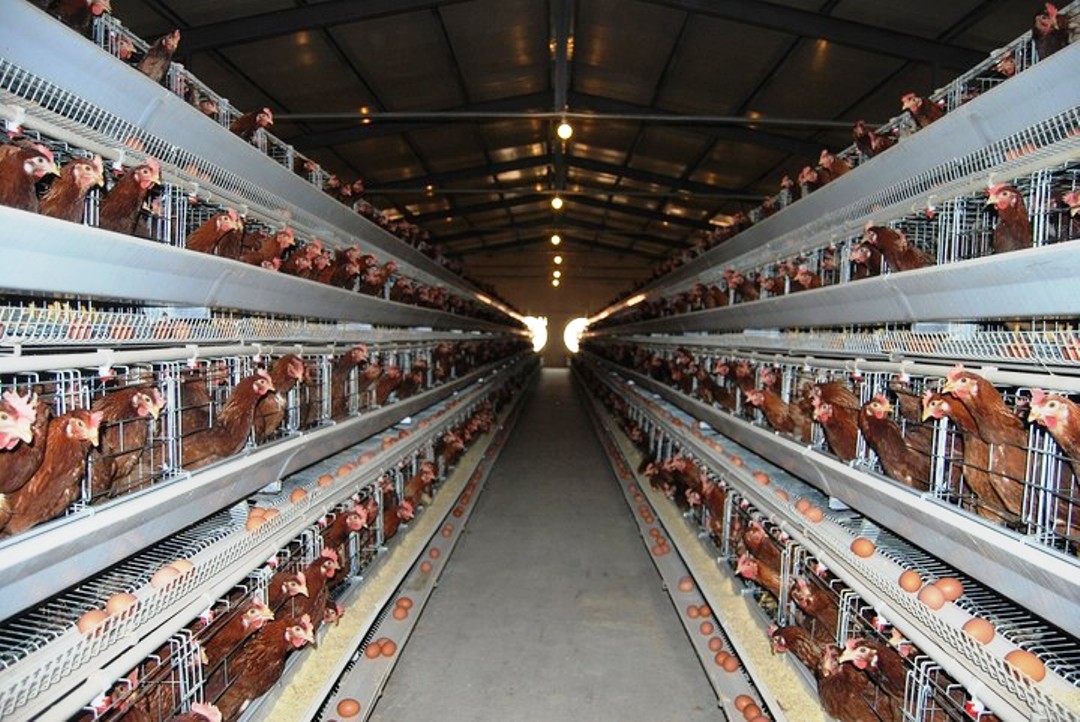 Diseases and health –
As a corollary of the above, as if that were not enough, we add the picture of the diseases induced directly and indirectly by intensive farming; for example, severe forms of Salmonella, the bacterium that causes food poisoning, have been found to be six times more likely to occur on battery farms than on non-cage farms.
In addition to various diseases and contaminations related to intensive farming, half of the antibiotics used in the world and about 80% of those used in the United States are administered to farm animals, mainly to ward off otherwise unavoidable diseases in industrial farms. Practice that contributes to creating the emergence of antibiotic-resistant superbugs.
FAO stated that “globally, the majority of cases of HPAI (Highly Pathogenic Avian Influenza) are believed to have originated from the mutation of a low pathogenic virus, derived from waterfowl, into a highly pathogenic virus of HPAI, through the passage in domestic chickens.
Furthermore, intensively reared and grain-fed animals produce meat with a higher concentration of unhealthy saturated fats, with less protein and with a poorer nutritional value than that of animals raised on pasture.
A typical intensively reared supermarket chicken currently contains around three times the fat and a third less protein than 40 years ago.

Resources and pollution –
To raise animals intensively, huge quantities of water are required: on average it takes 22 bathtubs for a kilo of chickens, 27 tanks for a kilo of pigs and 90 for a kilo of beef.
All while around 2 billion people are currently suffering from water shortages and this number is likely to grow to 4-7 billion by 2050, or more than half of the world’s population.
To this we add that a ton of corn produced with extensive agriculture (staple food for livestock from intensive farming) requires the equivalent of a barrel of oil to be produced. Organic farming and even more so the practices based on agroecology are more energy efficient than conventional agriculture.
In fact, the impact of intensive farming goes far beyond the boundaries of the “concentration camps” where the animals are raised; a huge area of ​​land is dedicated to chemical monocultures of cereals and soy for animal feed.
Some birds have disappeared; once common species such as the lark, the turtle dove and others have decreased significantly, due to intensive farming and cereals.
All over the world, habitat erosion, to favor the combination of cereal production / intensive animal husbandry, is producing an impressive decrease in biodiversity in just 50 years.
Intensive farms are not only energy-intensive, using concentrated feed, intense mechanization and low working standards, but they are also the main cause of a decrease in resources and biodiversity that risks plunging the planet, with all its passengers, into the abysses of a era with no return.

Yet we are in the 21st century: we live in dark times and it is time to assume a straight, clear conscience: the time has come to move towards forms of production and farming that bring true well-being and true peace.
To the detriment of what the multinationals of large distribution and industrial food supply to us, more people could live on the planet in conditions of dignity and farms could coexist of which we should not be ashamed: the time has come for animal husbandry to evolve and introduce alternative farming systems.
It is time to say enough to cages, in the name of the right of animals to live at least a dignified life, in systems that are more respectful of their well-being.
We can no longer think of encouraging, with taxpayers’ money, programs (such as the RDP) that still allocate funds to intensive farming. It offends us and makes us accomplices.
This is, among other things, the direction indicated by Compassion in World Farming (CIWF), which is the largest international non-profit organization for the welfare and protection of farm animals.
This is the direction of the “End the Cage Age” campaign which seeks to end the use of cages for hundreds of millions of animals living this nightmare on farms across Europe.
This is an initiative resulting from the synergy of 170 associations throughout Europe, of which 20 are Italian. A huge coalition of NGOs that raise public awareness and put pressure on national governments and European institutions.
In recent times, the End the Cage Age campaign has been joined by an international group of scientists who have sent a letter in support of the appeal of European citizens to end the use of cages for animals raised throughout the EU. Scientists include ethologist and conservationist Jane Goodall, United Nations Messenger of Peace and founder of the Jane Goodall Institute. The letter asks the European Commission to phase out the use of all cages on farms.
I believe that the time has come for a clear stance on the part of all of us.
It is not a battle for the exclusive defense of animal rights: it is a struggle to affirm the right to life and a dignified life of all living beings; because it is increasingly clear that the principle on which Life is based does not coincide with the principles set up in recent times by our “civilization”.
It is time to get out of obscurantism dominated by a devious, lying and ruthless capitalism.