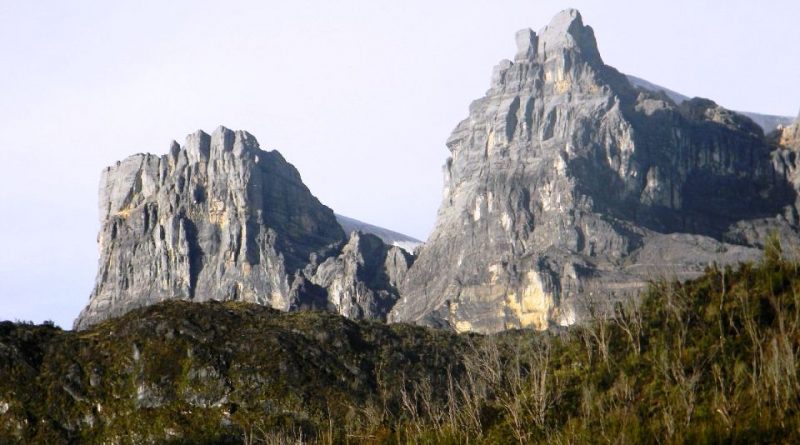 Puncak Jaya (also known as Mount Carstensz and Carstensz Pyramid) is a mountain formation in Indonesia, belonging to the Sudirman range. This area is characterized by high seismicity.
Although Mount Puncak Jaya belongs politically to a transcontinental state, and geographically in Oceania, being on the island of New Guinea and with its 4,884 meters (although some estimates give it between 5,020 and 5,040 meters) it is the most high of the entire Oceania, thus falling within the so-called Seven Peaks of the Planet and at the same time also the highest peak located on an island.

History –
The Puncak Jaya was first identified by the Dutch explorer Jan Carstensz (hence the other name known in Europe until recently), in 1623. Among other things, Carstensz was not believed when he claimed that on an island in proximity of the equator, there was a relief on which there was an important glacier.
We had to wait until 1909 for another explorer, also Dutch, Hendrik A. Lorentz, to reach the glacier itself. In 1962 an expedition led by an Austrian mountaineer, Heinrich Harrer (also author of the book Seven Years in Tibet), in which Philip Temple, Russel Kippax and Albert Huizenga also participated, finally managed to conquer the summit of the mountain.
It was only later, in 1963, when Indonesia occupied this province of New Guinea, that the mountain was renamed Puncak Jaya (which in Indonesian means Victory Peak), or even Sukarno Peak in honor of the first president and dictator of independent Indonesia. .

Geography –
Today the summit of Puncak Jaya appears free from ice, while the Carstensz Glacier and the Northwall Glacier extend on its slopes (the Merem Glacier disappeared in 2000). Since the mountain is in the equatorial zone, its ice mass changes only slightly during the year, even if it is subject to weak seasonal cycles. Unfortunately, since the mid-19th century there has been a gradual, albeit slight, decrease in the volume of the glacier, which lasted until the 1970s. Starting from that period, also due to the average increase in temperature due to climate change, this process has become more rapid, up to the current minimum.

Flora –
Puncak Jaya is located in an area that is home to incredibly diverse flora and fauna. The immense variety is determined by the enormous variety of ecosystems present: from shallow coral reefs, to coastal swamps, to rainforests of different altitudes and to the heights that rise to alpine glaciers.
The high alpine region is permanently covered with ice and snow; nothing grows here until you go down to 3,500 meters where fog forests predominate. These are made up of gnarled and crippled trees covered in moss and epiphytes, which create a more disturbing environment.
In areas between 2,000 and 3,000 meters, mixed woods predominate and these teem with vines, ferns and orchids. This is the region of the primeval forest, or original growth, totally untouched by man.
In the low mountain region, between 1,000 and 2,000 meters, the rainforests are denser and more lush. Ferns and similar orchids grow in abundance in these forests in rich harmony with the many species of tropical hardwood trees. In the lower rainforest alone, there are 1,300 different tree species with 80 known species of epiphytes living in symbiosis with them and to date, at least 2,770 orchid species have been positively identified.
The savannah forest is dominated by Australasian acacias and eucalyptus trees; this is found only in the southeastern corner of West Papua (Wasur National Park), the savannah is found in the Port Moresby area of ​​Papua New Guinea.
In the lower move we find freshwater swamps where marsh grass, sago palms and pandanus proliferate. Starch extracted from sago palms forms the staple diet of many Papuans. Towards the coast the freshwater marshes slowly become saline and it is here that mangrove and nipa palm forests dominate.
Of course, given the rich diversity of flora, West Papua is home to an equally diverse fauna. The Victorian naturalist pioneer, Sir Alfred Russell Wallace, collected no less than 125,660 specimens in West Papua.

Fauna –
In the area where the Puncak Jaya stands, birds range from the huge, primitive, flightless Cassowary to the most intricate and spectacular birds of Paradise and many other species. More than 600 bird species have been identified in West Papua, many of them endemic.
Most of the interesting mammals are marsupials such as wallabies and tree kangaroos which are the largest. The cus-cus is a beautiful tree-dwelling woolly marsupial, sadly prized by collectors. It has been heavily hunted and is now an endangered species. Echidna or thorny ant eaters are also found in West Papua with an endemic species.
Below, the coastal marshes are home to two species of saltwater crocodiles and both are very large indeed.
Estuarine crocodiles found in the Asmat region are known to grow up to seven meters in length. Wild crocodile hunting is now illegal and many crocodile farms have sprung up. Many species of snakes and lizards inhabit West Papua and include the docile three-meter Emerald Tree Monitor and possibly the most beautiful snake in the world.
Finally, a reference to something distant in altitude from the Puncak Jaya but which features coral reefs in shallow waters off the north coast of West Papua that are home to around 3,000 species of fish that make snorkeling and diving spectacular.