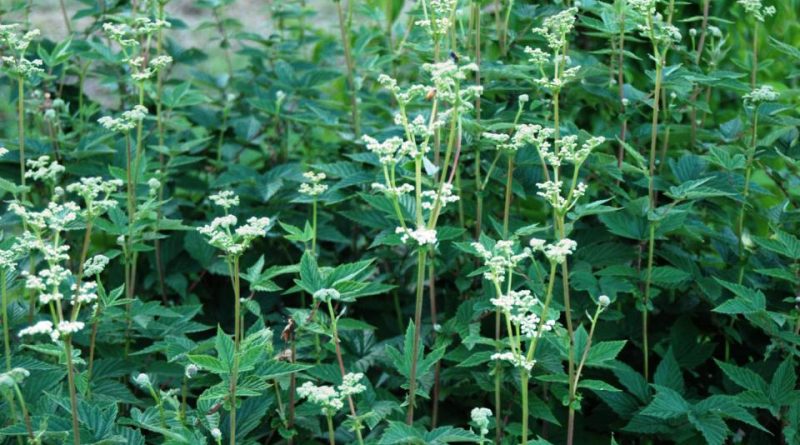 The meadowsweet (Filipendula ulmaria (L.) Maxim., 1879) is a herbaceous species belonging to the Rosaceae family.

Etymology –
The term Filipendula comes from fílum filo and from pendulous, dangling péndulus: perhaps a reference to the long filamentous stamens.
The specific ulmaria epithet is related to the genus Ulmus and which recalls that genus.

Geographic Distribution and Habitat –
The meadowsweet is a plant distributed in the cold and temperate-cold areas of Eurasia and widespread in Europe.
In Italy it is present in all continental regions.
Its habitat is that of wet meadows, ditches, streams, marshes and riparian woods, from sea level to the mountain belt. 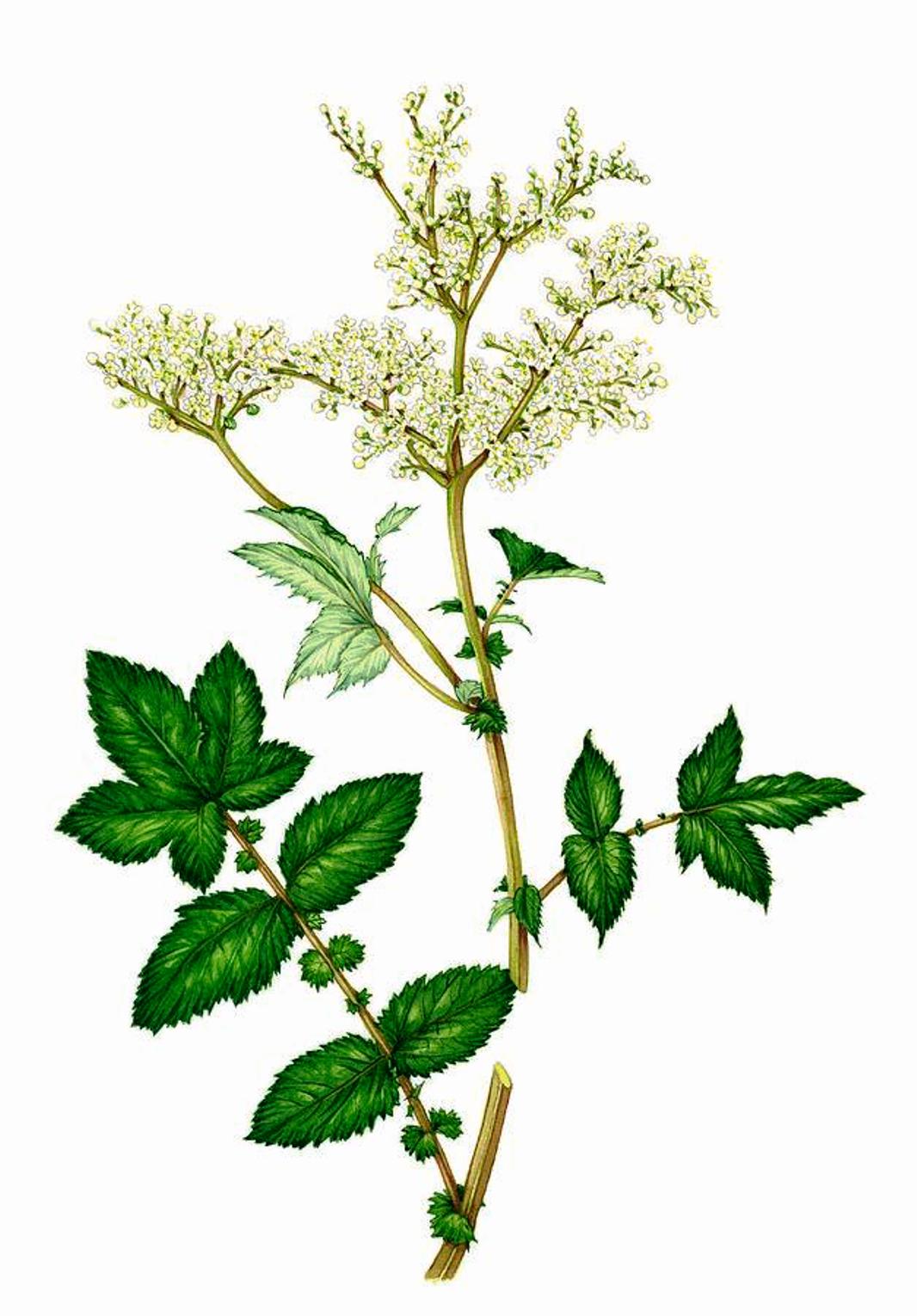 Description –
Filipendula ulmaria is a perennial herbaceous plant, with rhizome, which grows up to 2m in height.
It has gnarled-fibrous roots, almost erect angular stems and mostly brown in color.
The leaves are opposite to 2, lanceolate and serrated, interspersed with a pair of smaller leaves.
The inflorescences, in the shape of an umbrella, are ramified and start from the top of the stem carrying small hermaphroditic, creamy-white flowers, perfumed, with 5 petals and with numerous stamens longer than the petals.
The antesis runs from May until autumn.
The fruits are poliacenes formed by 4-6 hairless achenes, helically rolled, measuring 4-6 mm. The 1.7-0.7 mm oblong seeds have a flattened outline and a brownish color.

Cultivation –
The meadowsweet is a plant that prefers sunny positions or partial shade, sheltered from the wind. Plant that grows well in mild climates and tolerates the cold quite well.
From a pedological point of view, it prefers a moist, fresh, clayey, well-drained substrate with an alkaline pH.
The plant reproduces by seed in spring but can also be propagated by division of the tufts in autumn or in March.

Customs and Traditions –
Filipendula ulmaria is known locally by the names of: queen of the meadows, spirea, ulmaria, marsh meadowsweet, goat’s or goat’s beard, filipendola, mead grass.
This plant, together with the willow, is considered the vegetable aspirin: in fact salicylic acid was discovered in 1839 in the flowers of a Filipendula, at that time included in the genus Spiraea, for which it was called “spiric acid”; in 1859 the German chemist Hoffmann acetylated salicylic acid, obtaining acetylsalicylic acid or acetylspiric acid, from which Bayer coined the term “aspirin”.
Sweet wines are flavored with the flowers of this plant and take on a muscat flavor; the leaves are dyed brown and black; an oil used in perfumery is extracted from the gems.
The leaves of some species of Filipendula rubbed between the fingers spread a pleasant aromatic scent.
In ancient times, flowers were used to embellish churches during wedding ceremonies and to freshen the air and to mask bad smells in the rooms.
Filipendula ulmaria has anti-inflammatory, diuretic, antispasmodic, antirheumatic, purifying, astringent properties. It is used to relieve rheumatic pains, but also in febrile and flu states, against headaches and in dentistry. The plant’s anti-inflammatory activity is due to salicylic derivatives and flavonoids.
Among the active ingredients it contains: pyrogallic tannins, flavonoids (derivatives), glycosides, salicylic acid, vanillin, spirein.
The drug is obtained from the flowering tops and from the rhizome.
As for its toxicity, it is indicated as very low. Furthermore, no contraindications to normal therapeutic doses are reported except hypersensitivity to salicylates, interactions or incompatibility with anticoagulant drugs.

Preparation Method –
The Filipendula ulmaria drug is obtained from the flowering tops and from the rhizome. With this you can prepare mother tinctures and herbal teas for various healing remedies.
The so-called Olmaria wine can also be prepared. This preparation is obtained by macerating 40 grams of dried Meadowsweet flowers in a liter of good white wine with a good alcohol content. After five days of maceration, the wine is carefully filtered and kept in a cool place. It is advisable to take a liqueur glass during the main meals.