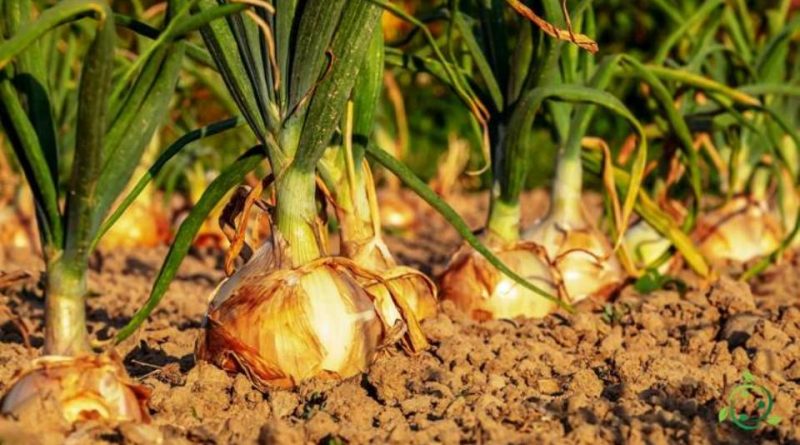 How to grow the onion in a biological way

The onion (Allium cepa L.) is a bulbous plant of the Amaryllidaceae family of which the bulb is used, which develops underground and is formed by modified leaves, which have an epidermis (protection).
From an agronomic point of view it is a biennial herbaceous plant whose life cycle, in cultivation, is interrupted at one year in order to be used for consumption.
Its main use is as a food and condiment, but it is also used for therapeutic purposes due to its properties in the medical field.

Growing condition –
The onion prefers medium-textured or basically sandy soils, although it can also be planted on clayey soils as long as they are adequately drained and leveled. The optimal pH values ​​are between 6 and 7. Onions are particularly sensitive to acidity, which affects the size of the bulbs and the thickness of the tunics.
From a climatic point of view it tolerates low temperatures well (minimum 5 ° C, optimal 20-25 ° C) and prefers dry ventilated areas well exposed to the sun.

Cultivation technique –
In onion cultivation, succession with species of the same family must be avoided and that with cabbage, potatoes and beets is also not recommended. On the other hand, the succession of autumn-winter cereals is optimal.
In the ordinary cultivation technique, a working at a depth of 25-30cm is carried out, preferably with dissecting elements to avoid the overturning of the slice of earth and loss of the organic substance; then proceed to the preparation of the seedbed. In loose soils it is possible to do false sowing, while in clayey soils it is advisable to carry out only the grubbing in winter, then work 1-2 days before sowing / transplanting; if it is prepared more in advance, then it happens that it is not possible to intervene against weeds as the soil does not dry out; if, on the other hand, the soil is coarse, weeds are born anyway (renetting effect), but they remain small and the soil dries out sooner.

Weed control –
The control of weeds, in organic farming, presents some difficulties due above all to the very low competitiveness of the onion towards weeds. In addition, especially in the early phenological stages, the onion is a plant particularly sensitive to mechanical interventions, limiting the choice of eras and tools to be used.
For this reason, repeated and timely interventions are necessary, carried out both with manual weeding and with mechanical means, including weeding and weeding.
For this reason it is good that the cultivation of the onion, in organic, free itself on agroecological techniques, planting this crop in soils with fewer weeds, carrying out, if possible, also associations with Zucchini, Beets, Strawberries, Tomatoes, Lettuce and Chamomile which do not disturb its growth and contribute to greater weed control and eco-systemic balance.
Among other things, fire weeding in post-emergency was also tried on sown onion. The results are not optimal, as the onion stops development. Technically, it is necessary to intervene when the onion has at least 4-5 leaves and if the weeds are not too large.

Soil fertility –
Among the objectives of organic farming, one of the first is to increase the fertility of the soils. In the event that the levels of organic matter in the soil are too low, it is advisable to add manure composted to the preparation of the soil in January February for a ready supply of nitrogen. However, it should be noted that manure should not be recommended in soils that tend to be brackish so, in these cases, it must be used once and with the use of other organic substances such as cow or horse manure.
The availability of nitrogen is used to obtain a rapid development of the onion after planting but it must not be exceeded in order not to allow some weeds to compete. Furthermore, the quantities must not be exceeded because nitrogen does not become available at the end of the cycle, preventing the correct maturation of the bulbs (“closure”).
If the soil does not have a good supply of assimilable phosphorus, it is also advisable to carry out a phosphate fertilization by burying products based on bone meal and / or slow-release organic fertilizers rich in nitrogen (slaughtering derivatives, hides, compost) .

Implant technique –
As regards the planting of the onion, it is emphasized that the spring-summer varieties should be sown towards the end of February or the beginning of March. The transplanting technique is an interesting possibility for onion cultivation in organic farming compared to direct sowing.
The results obtained indicate that the best results are obtained with a low number of plants per alveolus (2-3 seedlings per alveolus). Furthermore, compared to sowing, this technique determines a greater containment of weeds and less use of manpower, which, by the way, becomes fundamental.
In the case of sowing, on the other hand, the seed must be buried at a depth of 2-3 cm, preceded and then followed by a rolling to favor its adhesion to the ground. As usual, the use of heavy rollers is not necessary, especially if the soil is more loose (sandy).

Irrigation technique –
In the practice of irrigation, it should be borne in mind that the onion, due to its superficial root system, is a crop that shows a high sensitivity to the availability of water. This sensitivity manifests itself in various phenological phases. During the germination and enlargement of the bulb, the soil must be kept constantly humid, decreasing the water supply in more consistent soils and increasing it in looser and more permeable soils. In any case, excessive irrigation should always be avoided in order not to favor the development of fungal diseases, also caused by possible localized stagnation.