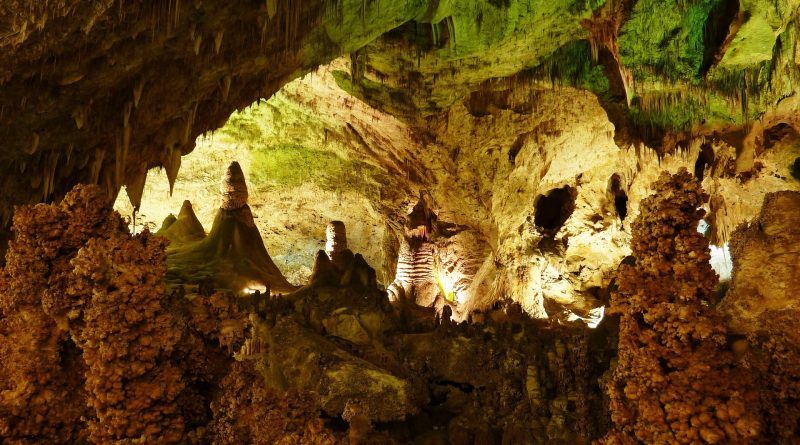 Carlsbad Caverns National Park, whose WDPA code is: 999, is a United States National Park located in the southeastern corner of New Mexico, between the Guadalupe Mountains and Eddy County.
This park with a land area of ​​189.26 km² consists of two thirds of areas considered wild, which helps to avoid changes that could modify the habitat.
Visitors can access the caves through the natural entrance or by taking an elevator, which directly reaches the center of the caves.
The park entrance is on Highway 62/180, about 18 miles southwest of Carlsbad (New Mexico). The park is part of the Junior Ranger Program.

History –
The cultural resources of the park are represented by a long and varied continuum of time in human history, starting from prehistoric times and testimony of many adaptations to the environment of the Chihuahuan desert. Human activities, including prehistoric and historical occupations of American Indians, European exploration and settlement, industrial exploitation, development of commercial and cave accessibility, and tourism have left memories of their presence and contributed rich and diverse history of the area.
The park has two historic districts on the National Register of Historic Places: the Cavern Historic District and the Rattlesnake Springs Historic District. The park museum, including the park archives, contains approximately one million cultural resource artifacts that are preserved and protected.

Geology –
From a geological point of view, the park area is included in what is called the Delaware Basin. Located in western Texas and southern New Mexico, it is famous for containing rich oil deposits and for the presence of fossil remains. The parks of the Carlsbad Caverns and the Guadalupe Mountains protect part of this basin.

The rooms –
Balloon Ballroom – Located above the ceiling of the main entrance hallway. This small room was reached for the first time thanks to a roped climb reaching a group of spheres, and passing them by entering the passage.
Bat Cave – a large rocky passage connected to the main entrance that was used for guano mining in the early twentieth century. Most of the bats present in the caves live in this room.
Bell Cord Room – named for the tall, narrow stalactite that disappears through a hole in the ceiling. This room is located at the end of the Left Hand Tunnel.
Bifrost Room – discovered in 1982, is located above the ceiling of the Lake of the Clouds. Its name refers to the Norse mythology according to which a celestial world can be accessed from the earth only by walking on a rainbow, the bifrost. The room got this name because of its position above the Lake of the Clouds and the coloring of its formations due to oxidation.
Big Room or The Hall of the Giants – The largest of the Carlsbad Caverns, measuring 33,210 m².
Chocolate High (Hall of Chocolate) – A labyrinth of passageways that stretch for 1.5 km in length, discovered in 1993 above a mud pit in the New Mexico Room, also known as the Chocolate Drop.
Green Lake Room – the tallest of the “scenic rooms”, it owes its name to a deep pool in one corner of the room. This room owes its color to the presence of malachite. In the 1940s, during a military test on the viability of the caves as a nuclear refuge, Green Lake was used to observe the ripples caused by an atomic test carried out many miles away. No movement of the water was detected.
Guadalupe Room – Discovered by a ranger in 1966, it is the second largest room in the Carlsbad Caverns. It is famous for the concentration of stalactites due to the dripping of soda.
Hall of the White Giant – A large hall containing a huge white stalagmite. Tours are regularly organized which also include a visit to this cave.
King’s Palace – The first of the four rooms known as the “scenic rooms”, owes its name to a geological formation resembling a castle in the center of the hall. The Bashful elephant can also be observed.
Lake of the Clouds – The deepest point of the caves. It is located in a side passage of the Left Hand Tunnel. It owes its name to the lake that contains globular cloud-like rock formations that formed in the water when the level was much higher than it is today.
Left Hand Tunnel – A long narrow passage with deep cracks in the ground. These cracks do not lead to other rooms. The Left Hand Tunnel connects the Lake of the Clouds to the Bell Cord Room.
Mystery Room – A small room located at the bottom of the caves.
New Mexico Room – Adjacent to the Queen’s Chamber and accessed via a short slope.
New Section – A series of crevices east of the White Giant and parallel to the Bat Cave. Studies in this section are still ongoing, and new discoveries are on the agenda.
Papoose Room – located between the King’s Palace and the Queen’s Chamber.
Queen’s Chamber – One of the most beautiful rooms in the entire cave system. Jim White’s lantern went out in this chamber during the explorations, and he remained in the dark for about half an hour.
Spirit World – Located above the ceiling of the Big Room. It is full of white stalagmites that look like angels.
Talcum Passage – A room located at the bottom of the caves, the ground of which is sprinkled with chalk.
The Rookery (Canneto) – One of the largest rooms. Numerous cave pearls have been found in this room.
Underground Lunchroom – Located in the Big Room at the head of the Left Hand Tunnel. It contains a bar built in the fifties, and an elevator through which you exit the caves. 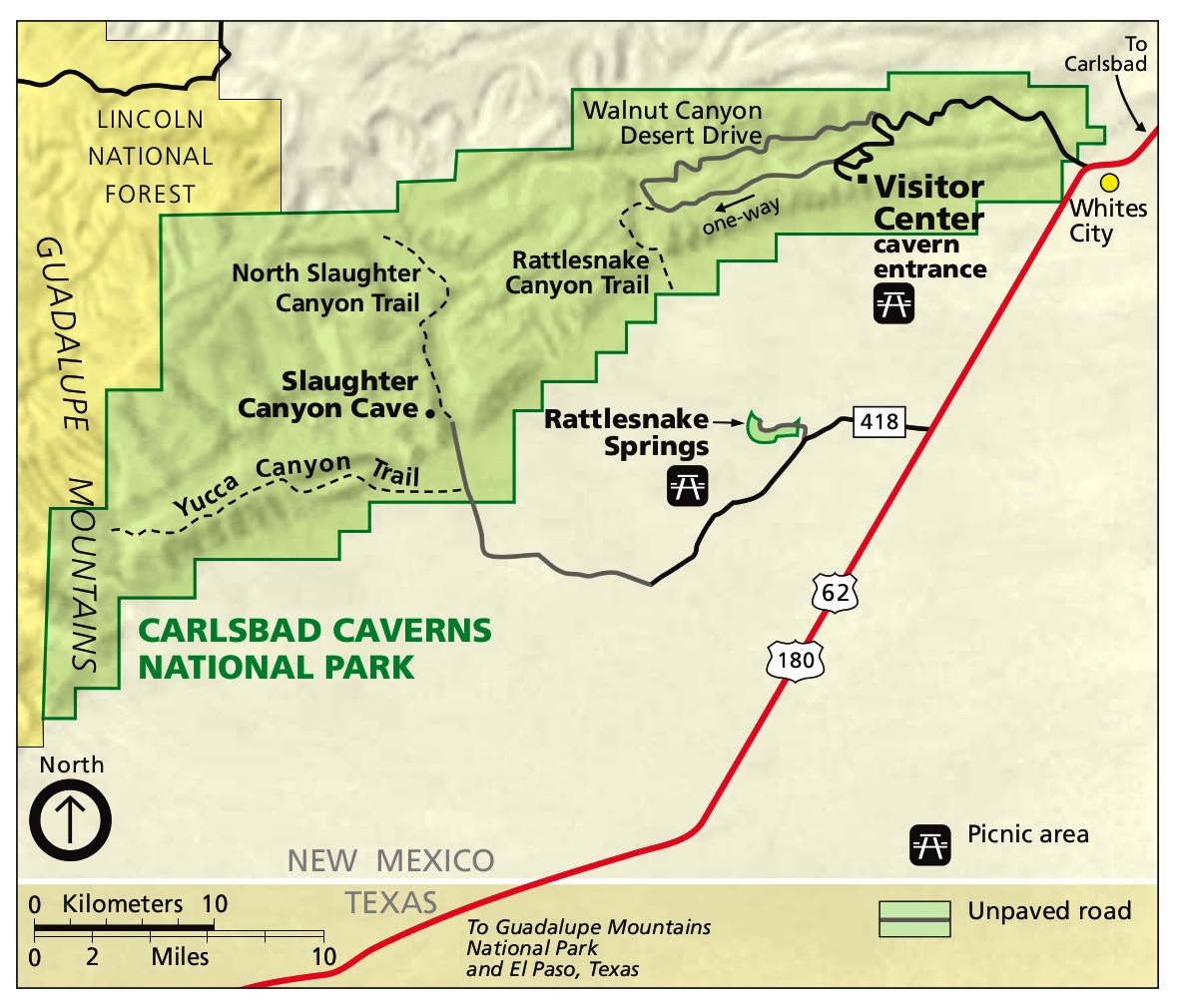 Flora –
Carlsbad Caverns National Park is characterized by multiple vegetation which in most cases denotes considerable biodiversity.
This diversity is further benefited by the park’s location at the intersection of the northern Chihuahua Desert, the southern Rocky Mountains, and the biogeographical provinces of the southwestern Great Plains.
Ecologists use the concept of “plant associations” to help describe and recognize patterns in how vegetation presents itself in the landscape. The park’s vegetation map, completed in 2003, verifies the uniqueness and diversity of its vegetation. It documents 85 different plant associations in the park. These range from desert shrubs and semi-grasslands of the lowland and foothills basins to mountain grasslands, shrubs and forests of higher altitudes.
Of these 85 plant associations, 28 are new associations that had not previously been described elsewhere.
The vegetation map documents that more than half of the park is made up of shrubs, with 7,227 hectares of mountain shrubs and 3,762 hectares of desert shrubs. About one third of the park, 5,903 hectares, is covered by various grassland associations. Other smaller cartographic units include 709 hectares of riparian arroyo woodland and shrubs, 714 hectares of woodland and 805 hectares of “other”, which includes small areas of some very interesting communities, such as scattered herbaceous wetlands, the wooded wetland at Rattlesnake Springs and various rock / rocky / arid / arroyo communities.
The park’s diverse ecosystem provides habitat for many plants found at the geographic limits of their ranges. For example, the Ponderosa pine reaches its easternmost limit here and the Chinkapin oak is located at the western end of its range.
There is more variety of cacti in the Chihuahuan Desert than in any other region. Experts believe this plant family originated here or in the south and expanded across the New World. The park’s vascular plant list notes 26 species or subspecies of cacti, including two federally listed species.
The plant families with the most species in the park are the species of the sunflower family, with 153 species, and the grasses, with 135 species. There are more than 60 known species of the legume family and more than 30 each of the mustard and poinsettia families. Other groups with numerous representatives include the mint family (25), the euphorbia family (15) and the ferns (13).

Fauna –
The diversity of habitats in the park, including the permanently flowing water at Rattlesnake Springs, provides an exciting variety of wildlife. This diversity is further benefited by the park’s location at the intersection of the southern Rocky Mountains, the northern Chihuahua Desert, and the biogeographical provinces of the southwestern Great Plains.
Many animals are found here at the geographical limits of their areas. For example, several reptile species are on the fringes of their distribution.
The southwestern deserts contain some of the highest diversity of mammals, birds, reptiles, and insects in the United States. The park provides an important year-round habitat for top predators such as cougars and nesting habitat for migratory species such as large colonies of cave swallows and Brazilian free-tailed bats that raise their young in the Carlsbad Cavern.
Rattlesnake Springs, a rare wooded desert riparian area that has been designated an Important Bird Area (IBA) by the National Audubon Society, draws bird watchers from around the world to see some of the more than 300 species that have been spotted there. The Natural Entrance is also an IBA Audubon due to the large colony of cave swallows that reside and breed there in the summer.
The park’s current wildlife checklists identify 67 mammal species (including 17 bat species), 357 bird species, 55 different reptiles and amphibians, 5 fish species, and an incomplete list of over 600 insects, with most identified every year.
Bats include bats, including a large colony of Mexican tailless bats. This group is estimated to have exceeded one million in the past, but their number has drastically reduced in modern times. The cause is unknown although it could be attributed to the interference of activities on trophic ecosystems useful for bats.
Numerous techniques have been used to estimate the number. The various methods indicate a population of many hundreds of thousands of specimens when the pups are in flight.