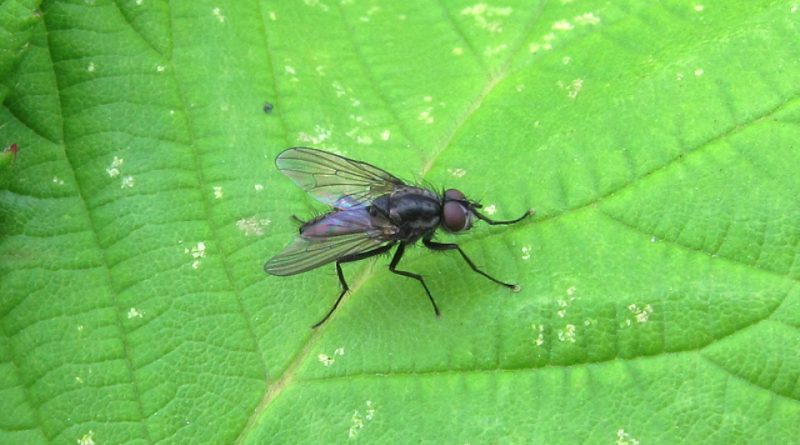 Geographic Distribution and Habitat –
The cabbage fly is one of the most important adversities of cabbages and other cruciferous plants, of European origin, where it is found practically throughout the territory, which however, for over 2 centuries, has also spread throughout North America.
This dipteran lives at the expense of crucifers, especially younger ones, both cultivated and spontaneous and infests above all the different species of cabbage, radish and turnip.

Morphology –
The cabbage fly is a small Diptera of about 5-6 mm in length, with a gray livery with longitudinal bands, on the thorax and abdomen, which are darker.
The larva is about 8 mm long and is white in color, ending at the back with a series of protuberances arranged in a ring.
The eggs are white and about 1mm in diameter.

Attitude and Life Cycle –
The cabbage fly overwinters as a pupa in the ground a few centimeters deep. In the spring period, when temperatures reach 8-9 ° C, around the period of late March – April, there is the fluttering of the adults who mate and, subsequently, the females lay oviposhes near the collar of the plants.
The larvae will be born after about two weeks and these immediately attack the plants, penetrate them and live inside them until maturity.
In the second half of May, the adults of the 2nd generation can appear giving rise to the second generation larvae, followed by a 3rd generation and, in favorable climatic conditions, even a 4th generation.
Adults feed on nectar and are attracted to cruciferous plants. Females live only 12-15 days and, with favorable temperatures around 20 ° C, they can lay up to 100-150 eggs at the collar of plants divided into groups of 20. Fortunately, the natural mortality of eggs and newborn larvae is very high.
The newly born larvae, on the other hand, tend to burrow themselves, penetrating the roots of the cabbages and digging tunnels in the tender parts, an action that leads to the progressive destruction of the roots. Subsequently, the plant perishes until it dries up also due to the subsequent appearance of root rot.
The most serious attacks occur in spring but autumn crops are also subject to attacks by the fly. The damage is caused by the larvae which, although present in all phases, are more serious in emergencies after sowing or after transplanting in spring and autumn.
This fly, depending on the latitude, can perform from one (in the northernmost areas of Europe or North America) up to four in the southernmost areas.

Ecological Role –
The adults of Delia radicum feed on nectar, especially crucifers, while the larvae carry out a trophic action on their tissues.
For agricultural crops, the damage occurs on the roots, the collar and, sometimes, in the petioles of the leaves and is determined by the trophic activity of the larvae; these nourish by penetrating the collar and digging tunnels in the roots and leaf petioles.
The tissues affected by the larvae of this fly are subject to rot, the foliage turns yellow and the development of the plant is stunted; in case of heavy infestation the entire plant succumbs.
The containment interventions against this dipteran must be directed towards the application of agronomic and agro-ecological techniques.
The agronomic struggle essentially consists in the destruction of vegetation residues, after harvesting, and in the control of spontaneous Cruciferae near the crops.
Agro-ecological practices should be directed towards increasing crop rotations and associations.
The chemical fight must be the last resort, but it is almost always necessary due to errors in agronomic and agro-ecological practices and is carried out in two ways:
Geodisinfestations with phosphorganic-based granular products;
Spraying carried out at the base of the plants, after overcoming the transplant crisis, with special insecticides; however, it should be remembered that this remedy must be weighed according to the major imbalances that this entails with regard to the biocoenoses of other organisms such as insects, moles and other mammals or birds.