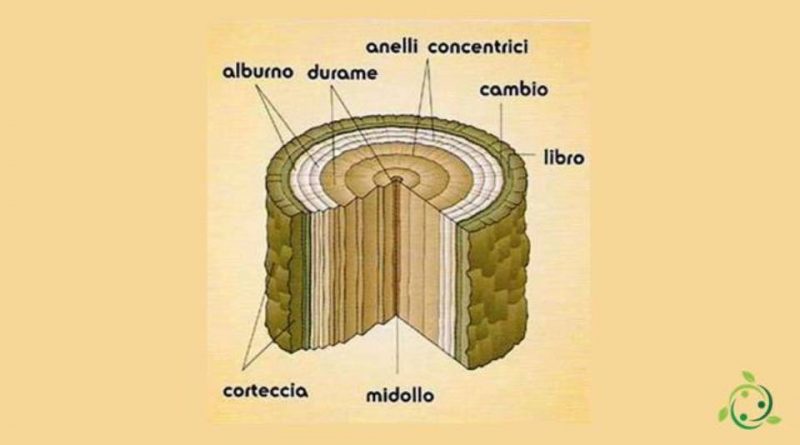 In botany the cambium is a meristematic cribro-vascular (or cribro-woody) tissue, made up of young cells, placed between the xylem and the phloem, in the woody stems of the gymnosperms and in the dicotyledons. These cells, at the beginning of the growing season, multiply and subsequently differentiate, forming xylem and secondary phloem.
The cambium is an embryonic tissue interposed between wood and book, which performs the function of growth and secondary development of the stem and root.
The cambium is considered a secondary meristem since, at least in its final form, it derives from processes of differentiation of parenchyma cells already partially differentiated and not directly from the meristematic cells of the embryo.
Promissory cells are of two types:
– initials of the rays – the new medullary rays originate; they are isodiametric, contain well developed plastids and vacuoles; of the cells to which they give rise, one remains meristematic while the second differs in parenchyma, both inwards and outwards, with respect to the initial itself;
– fusiform initials – give origin with dipleural division to the secondary elements of the book and wood; they are more numerous than the initials of the rays; in cross section they appear small and flattened, in longitudinal section they are long, narrow and tapered.

A change is also observable in the primary structures of the Dicotyledons, as in the fibrovascular bundles of the stem in the primary structure between wood and book there remains an area with a meristematic character (intrafascial change).
The cambium produces new elements of the wood towards the inside and new elements of the book towards the outside, which, joining through the primary medullary rays, form a ring of a certain thickness, thus determining the increase in diameter of the stem and the root . Usually each cell segments alternately inwards and outwards; in cold climates or unfavorable conditions, cells can reduce or even cease activity.
This factor, from the analysis of the thickness of the circles, makes it possible to determine the climate and environmental conditions in which a certain plant lived, even in distant times. However, part of the cells always maintains the meristematic activity thus allowing a practically indefinite life to the structures in which they are present.