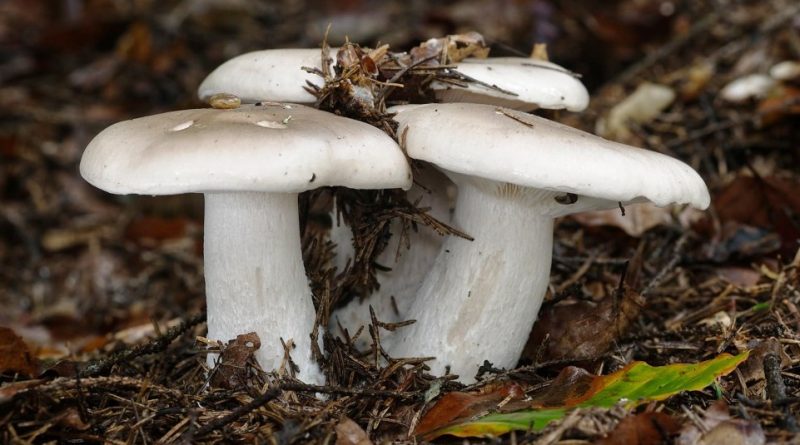 The clouded agaric (Clitocybe nebularis (Batsch) P. Kumm, 1871) is a mushroom belonging to the Tricholomataceae family.

Etymology –
The term Clitocybe comes from the Greek κλῑτύς clitús declivio, slope and κύβη cýbe head: with an inclined head, due to the generally funnel-shaped hat shape, due to the decurrent gills.
The specific epithet nebularis comes from nebŭla fog, cloud: veiled, nebulous, indefinite or grayish, or of fogs, for the growing season.

Geographic Distribution and Habitat –
Clitocybe nebularis is a saprophytic fungus that needs a substrate rich in decaying plants that grows very often in groups of numerous specimens, in deciduous and coniferous forests, in late autumn and in winter (if not too rigid). The mycelium runs on dead leaves and small frustules. 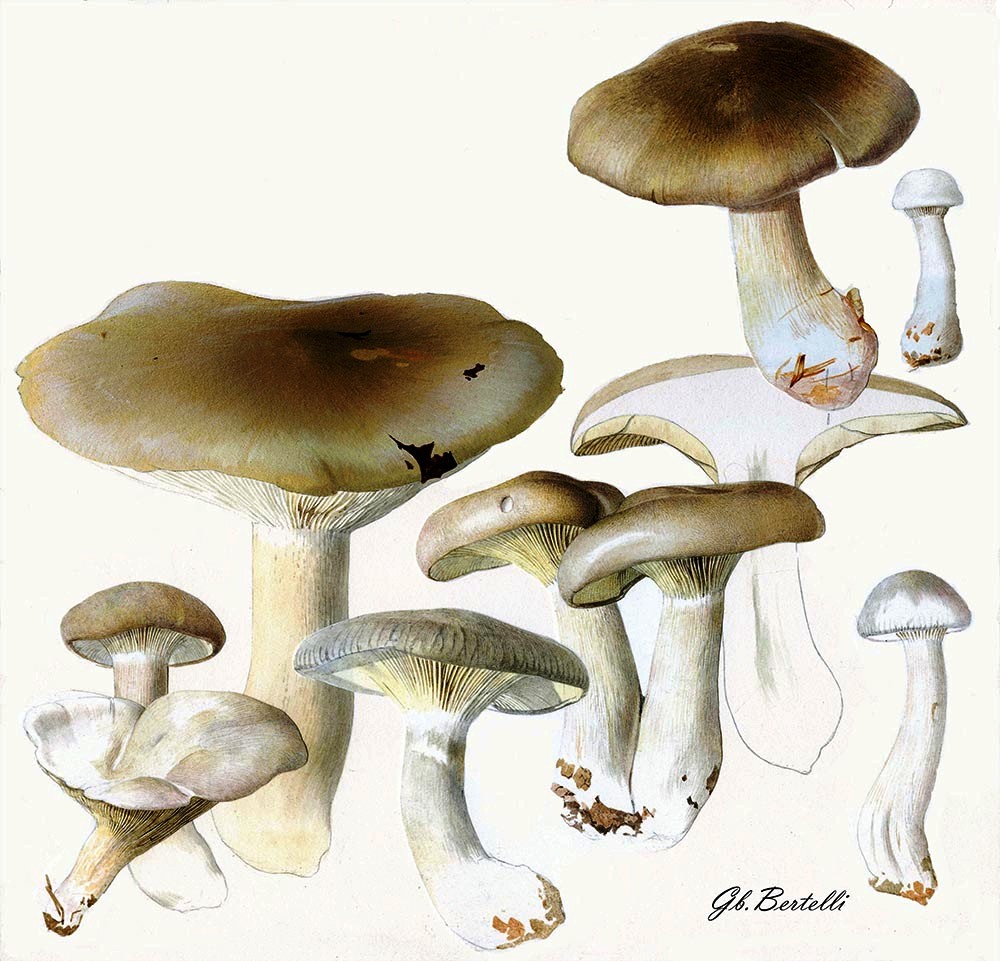 Recognition –
The Clitocybe nebularis is recognized for having a convex, then flat, sometimes depressed cap in the center; convoluted margin, gray-brown, whitish color, not hygrophanous, but pale when dry, covered with a very fine whitish bloom; 8–20 cm in diameter, with a gray cuticle of different shades and if the fungus is not moist, shiny.
The gills are narrow, uneven, dense, decurrent, finally whitish with cream-colored shades; quite easily separable from the flesh of the hat.
The stem is cylindrical in shape, elastic, enlarged at the base and attenuated towards the cap, whitish or gray, striated-fibrillar, often hollow, 6-9 x 1,5-3 cm.
The flesh has a compact, firm consistency, then soft and white in color, with a strong and aromatic odor, at times unpleasant (like “sweat” or wood) that remembers that of the Lepista caespitosa and the inverse Lepista. Furthermore, the smell is often not unpleasant, especially in mushrooms grown in warm deciduous woods. It has a mild, intense and aromatic flavor; slightly acrid in the less young specimens.
Under the microscope, spores of cream color in mass, ovoid-elliptical, 6-7 x 3.5-4.5 µm, smooth, are noted.
The basidia are 20-25 x 5-7 µm, tetrasporic.

Cultivation –
The clouded agaric is an uncultivated mushroom that grows in nature where carpophores often form long “straight lines” on the ground, occasionally even up to 30 meters. At other times the large groups form the well-known “witch circles”.
The impression you can get in finding these mushrooms is to see many small “clouds” that come out of the foliage.

Customs and Traditions –
Clitocybe nebularis is a toxic mushroom that is unfortunately still consumed by many for its meat with an aromatic and intense flavor, although not appreciated by everyone because it is quite strong.
This mushroom can be confused with Entoloma sinuatum (Entoloma lividum), a poisonous mushroom with potentially dangerous effects, so it is not recommended to collect it for inexperienced collectors.
Among other fungi, it may occasionally be confused by the most inexperienced with very old specimens of Lepista caespitosa (to be discarded), with the poisonous Entoloma lividum, which can grow in the same habitat. The main difference is to be found in the color of the lamellae of mature subjects: these are yellowish in Clitocybe nebularis and deep pink in Entoloma lividum, in addition to the strong and characteristic odor in Clitocybe nebularis, decided of fresh flour in Entoloma lividum.
Clitocybe alexandri is also very similar to it but has a light smell and brown-clay or gray-yellowish colors.
Finally we mention the Clitocybe clavipes which is smaller and more toxic, has a typically club-like and watery base of the stem, whitish flesh with a bitter almond smell and a sweet taste.
Returning to the edibility of Clitocybe nebularis, it should be remembered that although in many areas of Italy it is still consumed, even if less and less, this mushroom is poisonous for repeated consumption: toxins gradually accumulate in our body until they cause gastrointestinal and neurological intoxications. . There have been cases of people suffering from severe headaches.
From a biochemical point of view, it contains volatile toxins that can be removed by pre-boiling, responsible for the severe headache mentioned above.
Contains water-soluble toxins that can be eliminated by throwing away the pre-boiling water.
Finally, it contains thermostable toxins that cannot be eliminated, which therefore remain even after prolonged cooking, and which cause intoxication due to accumulation.
Certainly it is to be considered a species responsible for inconstant gastrointestinal poisonings.
Clitocybe nebularis, for many years, was the most collected and marketed mushroom in Italy, but its toxicity has now been demonstrated with certainty and has been deleted from the lists of marketable mushrooms. Unfortunately it is still collected by some even if the risk of collecting and consuming it is now evident.
From the ecological point of view, it is emphasized that Clitocybe nebularis has a special host: Volvariella surrecta, a small mushroom that grows on the old decaying hats of Clitocybe nebularis, which invades with its whitish mycelium clearly visible even before the endowed basidiomes appear of a beautiful pink volva.

Preparation Method –
As mentioned before, Clitocybe nebularis is a toxic fungus especially due to repeated ingestion and accumulation of toxins.
However, if the intention is to still consume this mushroom despite all the contraindications, it is good to follow some precautions.
First, the mushroom must be subjected to a prolonged pre-boiling of at least 30 minutes; with this method the integrity of the mushrooms is not affected because the meat is very compact; in addition, the cooking room must be ventilated.
Then the carpophores must be turned over in a colander and it is verified that all the cooking water is lost.
The mushrooms are then placed in a bain-marie in a basin and left to soak for about 30 minutes. At this point of processing, all the water must be removed and the mushrooms can be cooked to taste or preserved in oil.
It should be noted, once again, that it is still convenient to consume this mushroom with great caution, that is, a few specimens at a time and in meals quite spaced over time.