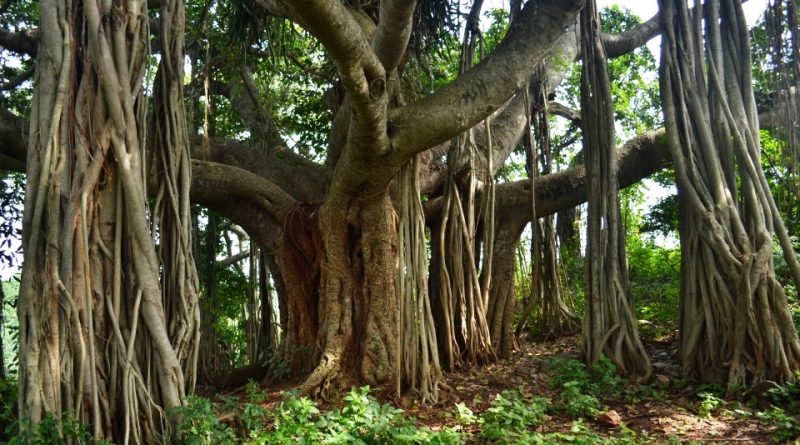 The banyan (Ficus benghalensis L., 1753) is an arboreal species belonging to the Moraceae family.

Etymology –
The term Ficus is the classical Latin name of the fig, a genus already known then, probably derived from Hebrew.
The specific epithet benghalensis comes from Bengal, a region of the Indian subcontinent divided between India and Bangladesh: due to its origins.

Geographic Distribution and Habitat –
The banyan is a plant native to an area of ​​eastern Asia and the Indian subcontinent.
The tree has naturalized in northeastern Australia, where it is considered invasive.
Its habitat is that of monsoon areas and rainforests and lowland forests at altitudes between 500 and 1,200 meters. 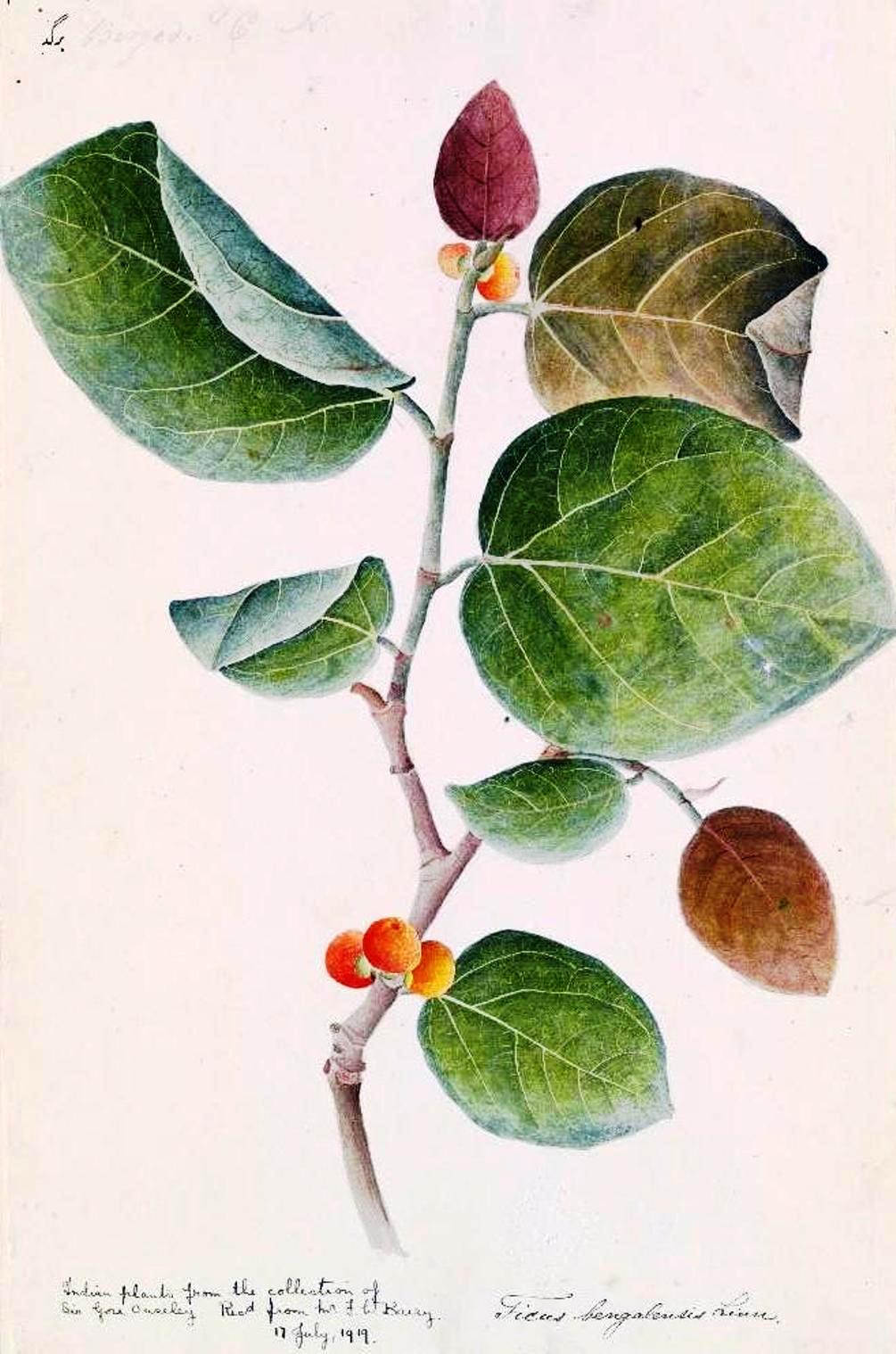 Description –
Ficus benghalensis is an evergreen, perennial tree, with a habit that is found only in a few species of the same genus: aerial roots branch off from its expanded branching, which at first absorb moisture from the air, but when they reach the ground they penetrate it, transforming the tissues , so that the remaining part becomes in turn a columnar stem with its own roots, while remaining attached to the primitive plant.
The plant usually begins life as an epiphyte, growing on the branch of another tree; as it ages it sends down aerial roots which, when they reach the ground, quickly form roots and become much thicker and more vigorous. They provide nutrients to the fig tree, allowing it to grow faster than the host tree. The aerial roots gradually surround the host tree, preventing its main trunk from expanding, while at the same time the foliage suffocates the host’s foliage. Eventually the host dies, letting the fig tree continue to grow without competition.
The canopy is wide and widespread and can reach a height of 20-30 meters or more.
The leaves are leathery, ovate, dark green with pale veins, about 20 centimeters long.
The flowers, small and greenish, are gathered in clusters that branch off from the axillary part of the leaves.
Like all species belonging to the genus Ficus, it produces a very particular inflorescence that takes the name of siconio. It is a fleshy pyriform receptacle inside which both the male flowers (reduced to single stamens) and the female flowers (reduced to single pistils) are kept. At the top there is a small opening, called ostiolo, from which pollinators pollinators enter. Once the female flowers have been fertilized, an infructescence develops, also called silicon, which in appearance recalls the common fig (Ficus carica L.). Inside there are the real fruits made up of small achenes that are red and round.

Cultivation –
Ficus benghalensis is a plant that grows well in regions with a mild climate and prefers sunny, warm – humid exposures. Resistant to drought but fears frost.
The preferred climate is that with annual daytime temperatures between 26 and 36 ° C, but can tolerate 9 – 40 ° C.
Mature plants do not tolerate temperatures below -2 ° C but the growth of young plants is damaged at -1 ° C.
It prefers an average annual rainfall in the range of 1,000 – 2,500 mm, but tolerates 500 – 4,000 mm.
Young plants are quite shade tolerant, but require increasing amounts of sunlight as they get larger.
It prefers a fertile, light to medium soil, with a pH between 5.5 and 7, tolerating 4.5 – 8.5.
These plants have a unique form of reproduction that relies on a single highly specialized wasp species that is itself totally dependent on that fig species to reproduce. Trees produce three types of flowers: male, a long-styled female, and a short-styled female flower, often called a gall flower. All three types of flower are contained within the structure that we usually think of as the fruit.
The female fig wasp enters a fig tree and lays eggs on the short-styled female flowers while pollinating the short-styled female flowers. Wingless male fig wasps emerge first, inseminate emerging females, and then pierce the exit tunnels from the fig tree for winged females. The females emerge, collect the pollen of the male flowers and fly away in search of the figs whose female flowers are receptive. To support a population of its pollinator, individuals of a Ficus spp. it must flourish asynchronously. A population must exceed a critical minimum size to ensure that at any time of the year at least some plants have the emission and reception overlap of fig wasps. Without this temporal overlap, short-lived pollinating wasps will become locally extinct.
Propagation can take place by seed which germinates better at a temperature of about 20 ° C or by tip cuttings about 4 – 12 cm long, taken from the lateral branches.

Customs and Traditions –
Ficus benghalensis is a national symbol of India and is considered sacred. A gigantic specimen was described by Nearchus during Alexander the Great’s expedition along the banks of the Narmada River.
The tree is harvested in its natural state for its edible fruit and for medicinal uses. It also provides a lumber and binding material.
In addition to being considered sacred by Hindus, the tree is commonly planted for religious purposes, it is also grown as an ornamental and to provide shade along the streets as well as in parks and large gardens.
Figs produced from the tree are eaten by birds such as the Indian myna. Fig seeds that pass through the digestive system of birds are more likely to germinate and sprout earlier.
In Theravada Buddhism, this tree is said to have been used as the tree for attained enlightenment, or Bodhi, by the twenty-fourth Buddha called “Kassapa – කස්සප”. The sacred plant is known as “Nuga – නුග” or “Maha nuga – මහ නුග” in Sri Lanka.
It is the tree under which Lord Adhinath, the first Jain Tirthankara, attained Kewal Gyan or spiritual enlightenment.
The giant banyan trees of India are the largest trees in the world by canopy coverage area.
The largest and most well-known tree specimen in the world in terms of the two-dimensional area covered by its canopy is Thimmamma Marrimanu in Andhra Pradesh, India, which covers 19,107 square meters. This tree is also the largest and best-known tree in the world in terms of the length of its perimeter, which measures 846 meters.
Nearchus, an admiral of Alexander the Great, described a large specimen on the banks of the Narmada River in contemporary Bharuch, Gujarat, India; he may have described the specimen currently referred to as “Kabirvad”. The foliage of the specimen described by Nearchus was so large that it housed 7,000 men. James Forbes later described it in his Oriental Memoirs (1813-15) with almost 610 m in circumference and with more than 3,000 trunks. Currently the area of ​​its canopy is 17,520 square meters) with a perimeter of 641 meters.
Other noteworthy Indian specimens include The Great Banyan in the Jagadish Chandra Bose Botanic Garden in Shibpur, Howrah, which has an area of ​​18,918 square meters and is about 250 years old, and Dodda Aladha Mara in Kettohalli, Karnataka, which has a canopy area of 12,000 square meters and is about 400 years old.
In Europe, a notable specimen is found in the English Garden of Palermo where, on hot summer Sundays, it is often possible to witness a gathering under its foliage of entire families of Indian, Sri Lankan or Pakistani origin, who gather with towels and blankets. of bright colors under their banyan, feeling, for a moment, at home.
Among the edible uses, its fruits can be eaten both cooked and raw; these have a sweetish taste and are particularly appreciated by children but generally consumed only when better foods are not available.
Ficus benghalensis is also used for medicinal uses.
The leaves serve as a remedy for dysentery and diarrhea. They are used in a decoction with toasted rice as a diaphoretic.
The young leaves are heated and used as a poultice. They are applied to abscesses as a poultice to resolve suppuration and pus secretion.
The concentrated latex, combined with the fruit, is aphrodisiac and is used to treat spermatorhea and gonorrhea. Mixed with sugar, it is used as a treatment for dysentery in children.
The latex of the plant is applied topically to treat toothaches, bruises, painful areas, rheumatic joints and low back pain.
It is dripped into wounds to kill or expel germs and is applied to treat bleeding and swelling of the gums.
The bark is tonic and diuretic. An infusion is antidiabetic and a decoction is used as an astringent in the treatment of leukorrhea.
From the fibers of the root a decoction is obtained which is useful as a treatment against gonorrhea, while the tender ends of the aerial roots are used in case of persistent vomiting.
An infusion made from the twigs is a useful remedy for hemoptysis.
Latex is used against pain and fever, rheumatism and back pain, toothache and applied to chapped and inflamed soles.
The fruit is tonic and has a cooling effect.
Other uses include agroforestry ones.
However, this species can be considered a weed and harmful plant in the forest, occupying a large amount of space to the exclusion of more useful species. Furthermore, it is very destructive to any wall or building it grows in close proximity and is extremely difficult to eradicate.
Aerial roots are used for temporary binders. The bark and leaves contain tannins.
The latex obtained from all parts of the plant can be used to produce a lower quality rubber.
The wood is light, water resistant but of low quality, not suitable for general use, but could be used for secondary woodworking, such as drawer and cabinet linings.
It is used locally for poles, trolleys, furniture and for lining wells.

Preparation Method –
The fruits of Ficus benghalensis can be eaten both cooked and raw.
But this plant is also used for medicinal uses. In this case, various parts of the plant are used:
– the leaves, in the form of a decoction, with toasted rice as a diaphoretic, serve as a remedy for dysentery and diarrhea;
– the young leaves are heated and used as a poultice and applied to the abscesses to resolve suppuration and pus secretion;
– the concentrated latex, combined with the fruit, is aphrodisiac and is used to treat spermatorea and gonorrhea; it is mixed with sugar, it is used as a treatment for dysentery in children;
– also the latex is applied locally to treat toothache, bruises, painful areas, rheumatism, joint pain and low back pain;
Latex is also dripped into wounds to kill or expel germs and is applied to treat bleeding and swelling of the gums.