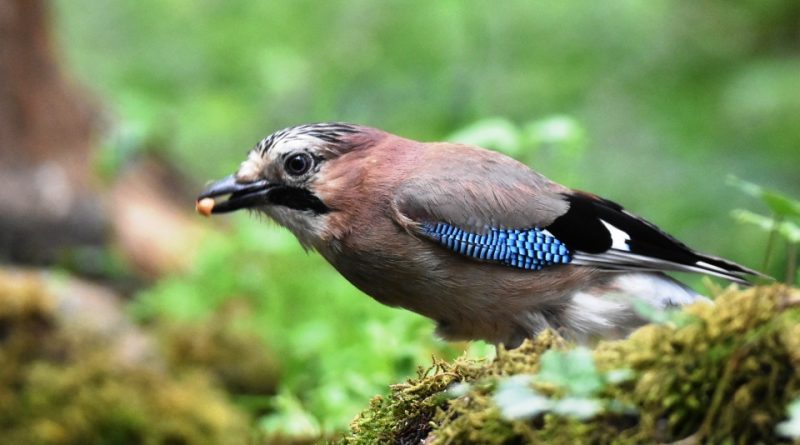 The Eurasian jay (Garrulus glandarius (Linnaeus, 1758)) is a bird belonging to the Corvidae family.

Geographic Distribution and Habitat –
The jay is a widespread species in a vast Palearctic range that includes all of Europe, Asia and northern Africa. In detail, it is widespread in most of Europe (including the British Isles, while the species is absent from the southwest of the Iberian Peninsula, Iceland and the central and northern portions of the Scandinavian peninsula), the Atlas Mountains in North Africa , the Anatolian Peninsula, the Caucasus, the Levant, Mesopotamia and the southern shores of the Caspian Sea, and extends east through Central Asia and Siberia to Manchuria (including Sakhalin Island) and Japan, going to the south (albeit with a disjoint range) to Indochina (Burma and the northern coasts of the Gulf of Siam) and the southern slopes of the Himalayas.
This species is widespread in Italy throughout the national territory, including the major islands, with two subspecies of which G. g. albipectus, present throughout the national territory except in Sardinia where the endemic subspecies G. g. ichnusae.
The habitat of this bird is that of coppice and mixed forests, with a preference for wooded areas with a prevalence of oaks and hornbeams even if it turns out to be a very adaptable species, which also inhabits the taiga, pine forests and Mediterranean scrub without major problems. . It also colonizes gardens, parks and suburban wooded areas, often benefiting from the presence of water and food (in the form of grains available in small bird feeders). 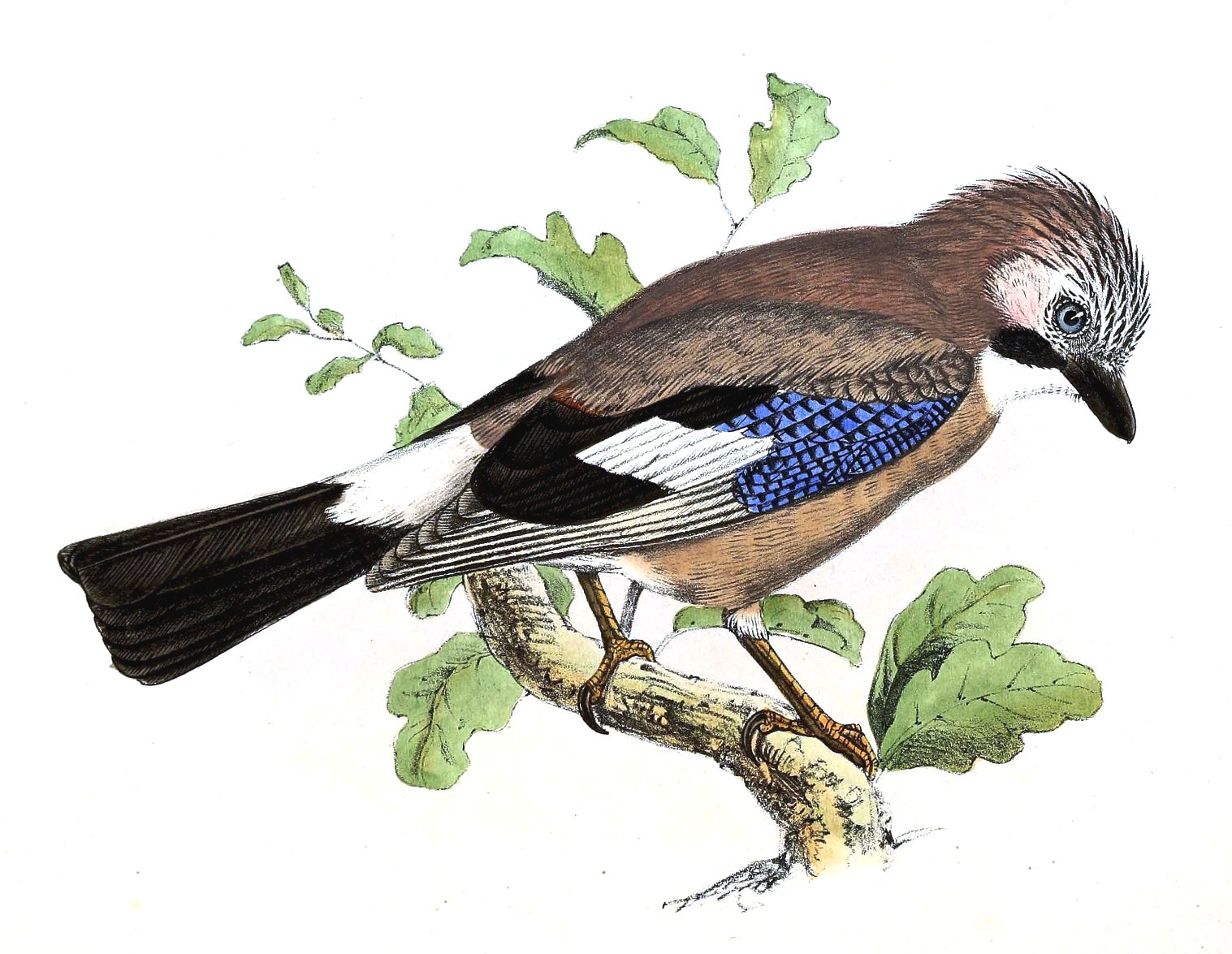 Description –
The jay is a passerine bird with a total length of 33-36 cm, a wingspan of 52-58 m, weighing 150-200 grams, with minimal sexual dimorphism.
It is recognized for its robust appearance, with a large square and elongated head with a strong and conical beak and erectile vertex feathers that form a crest that the animal raises in case of excitement or interest.
It has strong legs; the wings are rounded and typed and the tail is rather long (just under half of the total) and has wedge-shaped ends.
Easily recognizable also for the livery characterized by an unmistakable plumage as the area around the nostrils, the throat, the area around the eyes and the undertail are pure white, while the forehead and apex have white feathers with a black tip. On the sides of the beak there is a large black mustache that curves downwards to the upper edge of the neck.
The secondary and primary remiges are black (the latter only in the distal third and at the base, being for the rest white-silvery) and the tail (also white at the base). The coverts, on the other hand, have a bright blue color, with black horizontal bands edged with bluish in the middle, a characteristic together with the wide black and white wing bands that make the bird recognizable even in flight.
The rest of the plumage is instead gray-beige with pinkish shades, particularly evident on the nape and chest, while the belly tends to be slightly lighter and the back and wings show a greater tendency to greyish.
On the other hand, there are consistent variations of the livery in the regional populations in terms of coloring of the eyes, of the head, of the white bands and of the intensity of the reddish nuance of the plumage.
The eggs are blue-greyish with sparse reddish-brown spotting, not infrequently with more evident streaks towards the obtuse pole.
The flight appears a bit heavy, beaten and glided.
The call is unmistakable: harsh and strident, which is emitted very frequently, and can be heard especially during the hot months. Furthermore, this bird is able to imitate the sounds perceived in the surrounding environment, from birdsong (including the calls of their potential predators, including the owl) to the human voice.

Biology –
The jay, as mentioned, frequents woods consisting of oak, chestnut and scrub forests.
It is a strictly monogamous bird, in which couples tend to remain together for many years.
Before mating, the male courts the female by emitting a hoarse and clumsy song and making offerings of food.
The mating period begins between March and April, when the couples isolate themselves and build a very rough, flattened cup-shaped nest, which is usually built on top of the trees. This is done by both sexes by weaving twigs, twigs, blades of grass and straws for the outside and lining the inside with softer material, but always of vegetable origin, such as rootlets and moss.
In this nest the female lays 5-6 eggs, usually with only one annual brood.
The incubation period, performed by both parents is 16-17 days.
The young leave the nest after 19-29 days.

Ecological Role –
The jay is a very grumpy and difficult animal to approach.
Although it tends to be a sedentary bird, the jay is an excellent flyer, and especially the populations of colder areas tend to migrate towards milder climates (or lower altitudes, in the case of mountain populations) to escape the rigors of winter, following patterns irregular.
Moreover, it generally lives in pairs, but sometimes also in small groups, which however prove to be very fluid and easily tending to the scattering and dispersion of the single specimens.
It also has essentially diurnal habits of life; it moves indifferently between the various layers of the wooded areas, passing on the ground the time taken to search for food, between the bushes and the undergrowth the periods of rest or observation of the surroundings and between the branches of the trees the moments of escape from predators or night hours.
A peculiarity is that of the cleaning of the plumage that the red ants carry out using the “ant bath” technique.
From a food point of view, it is a basically omnivorous bird even if during the reproductive period the diet becomes more insectivorous due to the increase in courtship and offspring breeding activities.
It feeds mainly on large insects and larvae and the natural containment function that this bird performs in the black pine forests should be emphasized, where it keeps the processionary moth, small mammals (rodents, bats and shrews) and reptiles (lizards, geckos and financo at bay). small snakes), nestlings and eggs of small birds found in the nests (of which the jays, although much less than their “cousins” magpies, are great raiders). However, this bird’s favorite food is acorns, which alone make up more than half of this animal’s diet and account for the vast majority of its sustenance during the cold months.
The vegetable portion of the diet also includes beeches, chestnuts, walnuts, hazelnuts, grains, berries (especially blackberries and rowans) and fruits (especially apples and figs).
A particular aptitude of this bird is to cram excess food (especially acorns) in numerous hiding places located in the stumps, under the bark of trees or on the ground, in a large radius (up to 20 km away from the collection site). of its territory, taking care not to be observed by other specimens during this operation.
These supplies are accumulated throughout the year, with peaks towards the end of the summer, in order to cope with the possible rigors of winter with adequate food supplies.
Due to this habit, this bird has played an important role over the centuries in the spread and expansion of English oak and holm oak, in particular the rapid expansion of these species northwards immediately after the end of the last ice age would seem to be largely attributable to the dispersal by these birds.
According to the IUCN, this species, at least for the Italian range, is on the increase.