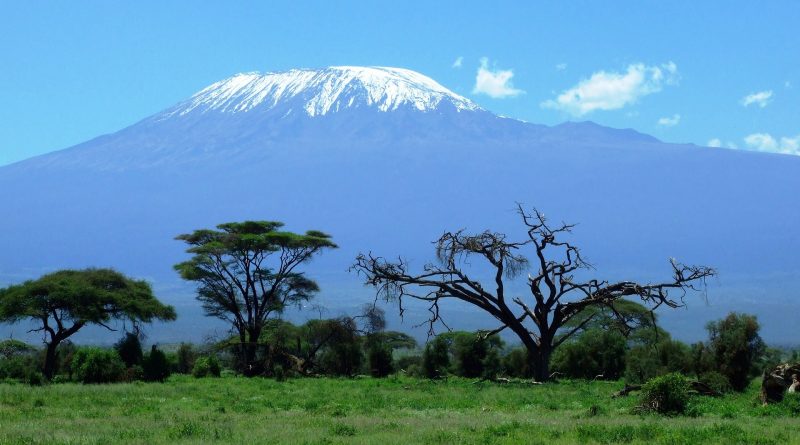 Kilimanjaro, also known by the names of Chilimanjaro is a dormant stratovolcano, consisting of the three volcanic cones Kibo, Mawenzi and Shira.
This peak, located in northeastern Tanzania, with its 5895 meters s.l.m. it represents the highest mountain on the African continent, the highest single mountain in the world and one of the highest volcanoes on the planet as well as being one of the seven peaks on the planet.
In 2003, scientists found that a certain amount of magma is only 400 meters below the crater: it is therefore feared that the volcano could collapse (or explode) as did Mount Sant’Elena (United States) in 1980.
Although there is no precise information on when the last eruption took place, some local legends suggest that there was one about 170 years ago.
At present, the summit of the volcano is covered by a perennial glacier (the Rebmann Glacier).
From a historical point of view, the peaks of Kilimanjaro, together with those of the Meru Mountains, had been called by the Greek-Roman merchant Diogenes: Mountains of the Moon. Diogenes sighted them during the Roman expedition to the sources of the Nile, roughly around 100 AD.
As for the etymology of the name, it is a source of controversial opinions as the various theories are unable to explain why the diminutive kilima is used, instead of the more appropriate word to indicate mountain, that is, mlima. A different approach assumes that Kilimanjaro derives from Kichagga kilemanjaare or kilemajyaro which means “who defeats bird / leopard / caravan”. However this theory cannot explain why the name Kilimanjaro was not in use in Kichagga before the European explorations of the mid-19th century.

Flora –
There are five distinct ecological zones on Kilimanjaro, each about 1000m “high”. Between 800 and 1800 m there is a thicket with villages, farms and meadows.
The next “level” of vegetation is the dense rainforest at 1800m – 2800m. This lush green area receives 1000 to 2000 mm of rain per year. Huge tree ferns, sycamores, junipers and moss can be seen, also known as the “old man’s beard”. This wetland is the perfect place for the multitude of plants, some of which are endemic such as the “impatiens kilimanjari”.
The moorland and semi-alpine moorland area is located between 2800 and 4000m. Here you can see the strange giant groundsel, the Senecio trees, the lobelias and the colorful red clubs.
The main source of indirect precipitation in this area comes in the form of fog which can envelop without warning. Temperatures here can drop as low as 0 ° C.
Above 4000 m you enter the alpine desert area, with low rainfall and extreme variations in temperature from night to day. There aren’t a huge variety of plants here in this is a barren and desolate landscape, but some everlastings and some yellow daisies can be found.
From 5000 m you enter the frozen lunar landscape of the Arctic zone. With only rock and ice, the nights are very cold and the solar radiation is extreme. There is practically no life here and the lichens that survive grow by about 0.5mm per year.

Fauna –
In the lower areas of Kilimanjaro, such as the forest area, there are a multitude of birds ranging from tropical Boubous, Hartlaub Turacos, Green Wood Upupe, Silvery cheeked Hornbills and more. Among the trees you can see (or certainly hear) primates such as blue monkeys, colobus monkeys and olive baboons. Civets, leopards, mongooses, piglets, dik-dik, elephants and Abbott’s duikers also live in the mountain forest, but sightings are extremely rare.
Just as plants struggle on the highest moor and moorland area, so do animals. If you are lucky, you will see the four-striped mouse, red-eyed doves, white-necked ravens and malachite solar birds. Mole rats and hard-haired, climbing rats are more difficult to spot. In terms of bird life, there are plenty of crows around and you can also encounter the very rare bearded vulture with its vast wingspan.
Finally, the alpine and icy areas are too harsh for the animals to survive comfortably.