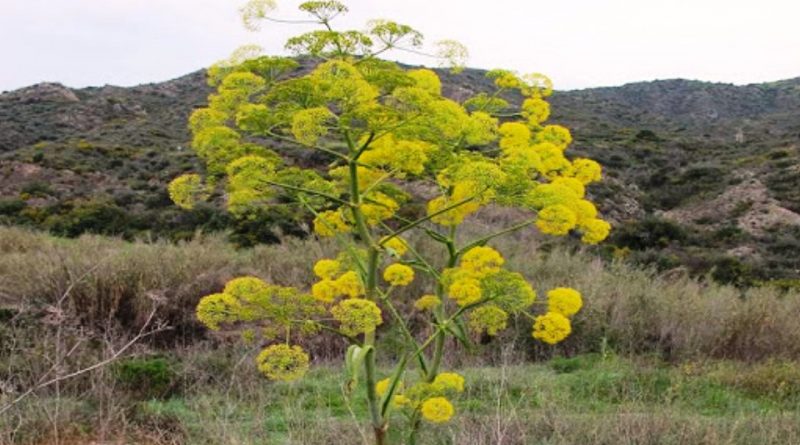 Etymology –
The term Ferula comes from ferula lash, wand, stick: for use as a light stick used by shepherds.
The specific epithet narthex derives from the Greek νάρθηξ “giant fennel, scourge”.

Geographic Distribution and Habitat –
Ferula narthex is a native of West Asia, in a territory between Afghanistan and Pakistan.
This plant is distributed across the Mediterranean regions to all of Central Asia and is grown in India, Tibet, Iran, and Afghanistan for its culinary and medicinal uses. In India it is found widely in Kashmir and the upper Himalayan regions. It is also found in Nepal and Sikkim.
Its habitat is that of the grassy slopes at altitudes of up to 3600 meters in Tibet. 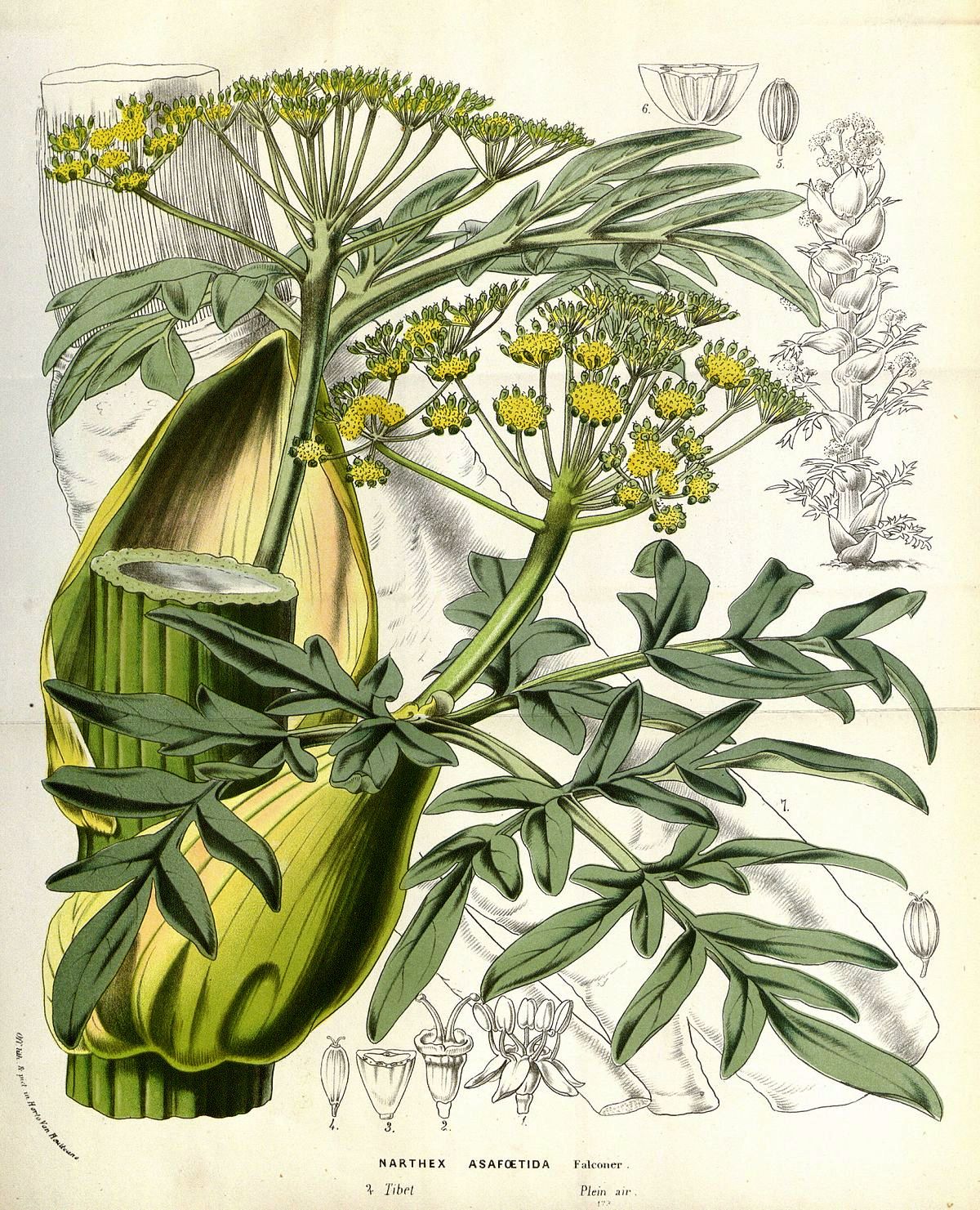 Description –
Ferula narthex is a perennial plant that can grow up to 2.50 meters in height.
It is a monoecious and very resinous species.
The stem is cylindrical, hollow and succulent.
The leaves are sheathed, pluripinnate and divided into linear laciniae. The apical ones are small while the basal ones are larger.
The umbel-shaped flowers are large and usually yellow in color.
The plant blooms in July.
The fruit is obovoid-compressed, about 8 mm long and about 1/2 mm wide, with side wings and seeds ripening in August.

Cultivation –
Ferula narthex is a plant that grows in most soils although it requires deep fertile soil in a sunny location. This species does not tolerate temperatures lower than -5 and -10 ° C.
The plant propagates by seed and it is recommended to sow as soon as the seed is ripe, possibly in a cold greenhouse in autumn or spring.
The transplant must be performed when the seedlings are small and the taproot is not perfectly formed as it is a plant that can not stand the transplant.
It can also propagate by division in the autumn period but the percentage of engraftment is low due to the disturbance made to the root systems.

Customs and Traditions –
Ferula narthex is a plant used both for food or other uses and for medicinal purposes.
From the root of this plant a gum is obtained which is used as a condiment and as a medicine. This is achieved by incising the roots.
The plant, mostly, is harvested in its natural state for local use.
The whole plant has a very strong smell.
Among the edible uses it should be remembered that the leaves and young shoots can be consumed, using it as an aromatic herb.
For medicinal purposes, the gummy resin, obtained from the root, is anthelmintic, antispasmodic, expectorant and nervine. It is used in the treatment of asthma, whooping cough, flatulent colic and pneumonia and bronchitis in children. Furthermore, the leaves are carminative and diaphoretic; the plant has recently been studied as a potential contraceptive.
This plant is widely used among the peoples of Asia where it is best used as an appetizer, digestive stimulant, penetrating and to give power to the body. In Ayurvedic culture it is used to pacify vata and kapha dosha. It is used to treat stomach pain, abdominal tumors, stomach related ailments, abdominal distension and is also a very effective herb for worm infestation. Due to its hot potency, it aggravates the pitta dosha in the body.
Among the various ones it is remembered that its antibiotic nature helps to fight various microorganisms that cause serious infections. It is also used to reduce severe pain and inflammation in rheumatoid and other joint problems. It also helps fight various parasites and microorganisms in the intestines in young children and is very effective for problems related to the digestive tract in infants.

Preparation Method –
To collect the resin from the Ferula gummosa this is collected by exposing the upper part of the root, and cutting it into strips. It is also possible to extract it by making incisions in the trunk.
It is harvested by removing some soil around the top of the root and then cutting it into strips.
The optimal balsamic period is between September and the first part of autumn.