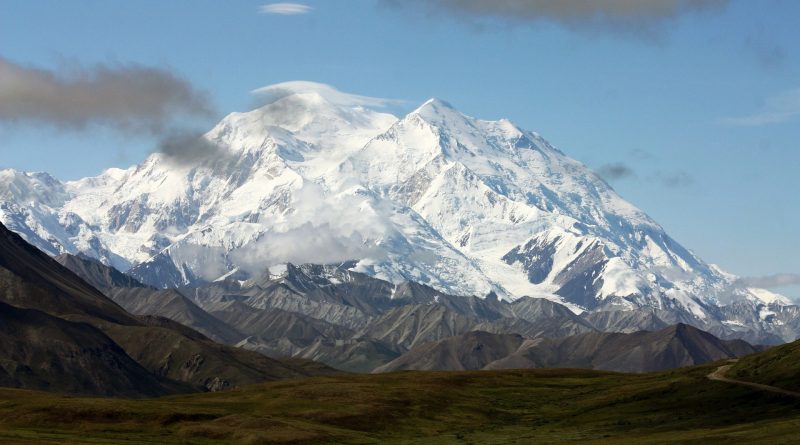 Denali is a mountain in the United States located in Alaska, this peak with its 6190 meters above sea level. it is the highest in the country and in the entire North American continent and the third in the world for prominence.
The history of the toponymy of this peak is quite complex.
The original name, which in the native Athabaskan language means “great mountain”, was added in 1896 to “Mount McKinley” in recognition of the then US presidential candidate William McKinley, who was then elected in the same year.
Later, in 1917, with the establishment of Mount McKinley National Park, the federal government officially recognized the toponym “Mount McKinley”.
We must then arrive in 1975, the year in which the Alaskan Toponymy Commission restored the name “Denali” at the state level, asking the equivalent federal office to do the same.
It must arrive at August 31, 2015 when, thanks to President Barack Obama, the name of Mount Denali was restored.
Denali National Park was established in the area of ​​Mount Denali.

Geography and morphology –
Mount Denali, although lower than Everest, has a wider and more gradual profile than the top of the world, this is because Mount Everest, although much higher in absolute terms (8848 m above sea level), it rises above the Tibetan plateau, located at about 5200 m, so that the difference in height between the base and the top of the mountain is equal to about 3600 m. In contrast, the base of Denali stands on a plateau high on average 700m, giving the mountain an actual vertical drop of 5400m.
From the morphological point of view, Mount Denali has two significant peaks: the south summit is the highest, while the north summit has a height of 5,934 m and a prominence of about 387 m. The north vertex is sometimes considered a separate peak and sometimes not; it is rarely climbed, except by those who make routes on the northern side of the massif. Five large glaciers flow from the slopes of the mountain. Peters Glacier is located on the northwest side of the massif, while Muldrow Glacier falls from its northeast slopes. Just east of Muldrow, and bordering the eastern side of the massif, is the Traleika Glacier. The Ruth Glacier is located to the southeast of the mountain, and the Kahiltna Glacier rises on the southwestern side of the mountain. With a length of 71 km, the Kahiltna Glacier is the longest glacier in the Alaskan mountain range.

Fauna –
The Denali region is home to a large variety of birds (167 species) and mammals (39 species). There are a significant amount of black and grizzly bears, moose and wolves, caribou, white bighorn sheep. Precisely for the latter Charles Sheldon, after his visit in 1907-1908, proposed to the United States Congress to create a reserve for these sheep. Other mammals present are lynxes, wolverines, coyotes, foxes and beavers, while the best known birds include griffins, golden eagles and bald eagles. The only amphibious species is represented by the wood frog.

Flora –
In the parks around Mount Denali there are over 650 species of plants that produce flowers, as well as mosses, lichens, fungi and algae. The flora of large areas of the park is conditioned by the presence of permafrost.
Up to 800 meters of elevation, the landscape is characterized by the evergreen forest of the taiga; beyond, the small vegetation of the tundra takes over.
In the park it is not uncommon to see portions of taiga in which the trees are tilted, each in a different direction; the phenomenon is due to the melting of the underlying permafrost, and has been baptized drunken forest.