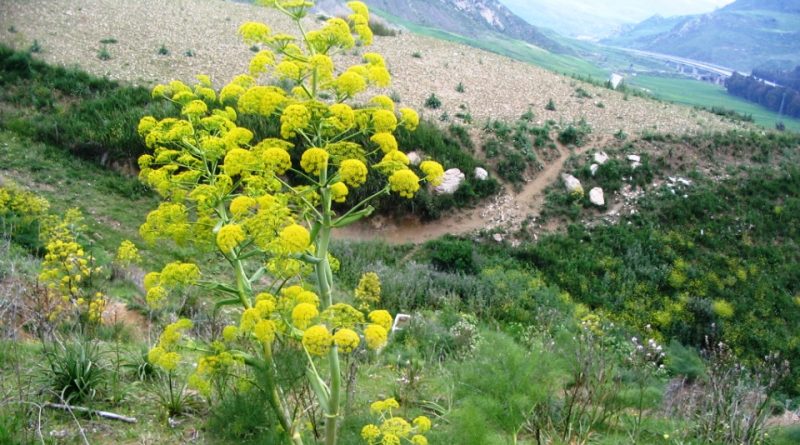 The asafoetida or asa fetida or fetid fennel (Ferula assa-foetida L.) is a species belonging to the Apiaceae family.

Etymology –
The term Ferula comes from ferula lash, wand, stick: for use as a light stick used by shepherds.
The specific epithet assa-foetida is of uncertain origin, according to some from the union of the Persian term رزین (razin), in Latin asa, to heal, allusion to its properties and from foéteo to exhale stench: fetid, with an unpleasant smell, stinking.

Geographic Distribution and Habitat –
Asafoetida is a plant native to Afghanistan and Persia, that is, in the desert regions of Tsaar and Khorassan, located between the Persian Gulf, the Caspian Sea and the Aral Sea. It also grows in Lavistan (Persia), Turkestan and northern India, on the hills of Karabagh [Scirvan (Asian Russia)], along the Zarafahan River S-E of Samarkand (Uzbekistan).
Its habitat is that of desert, dry and sandy, saline and steppe soils. 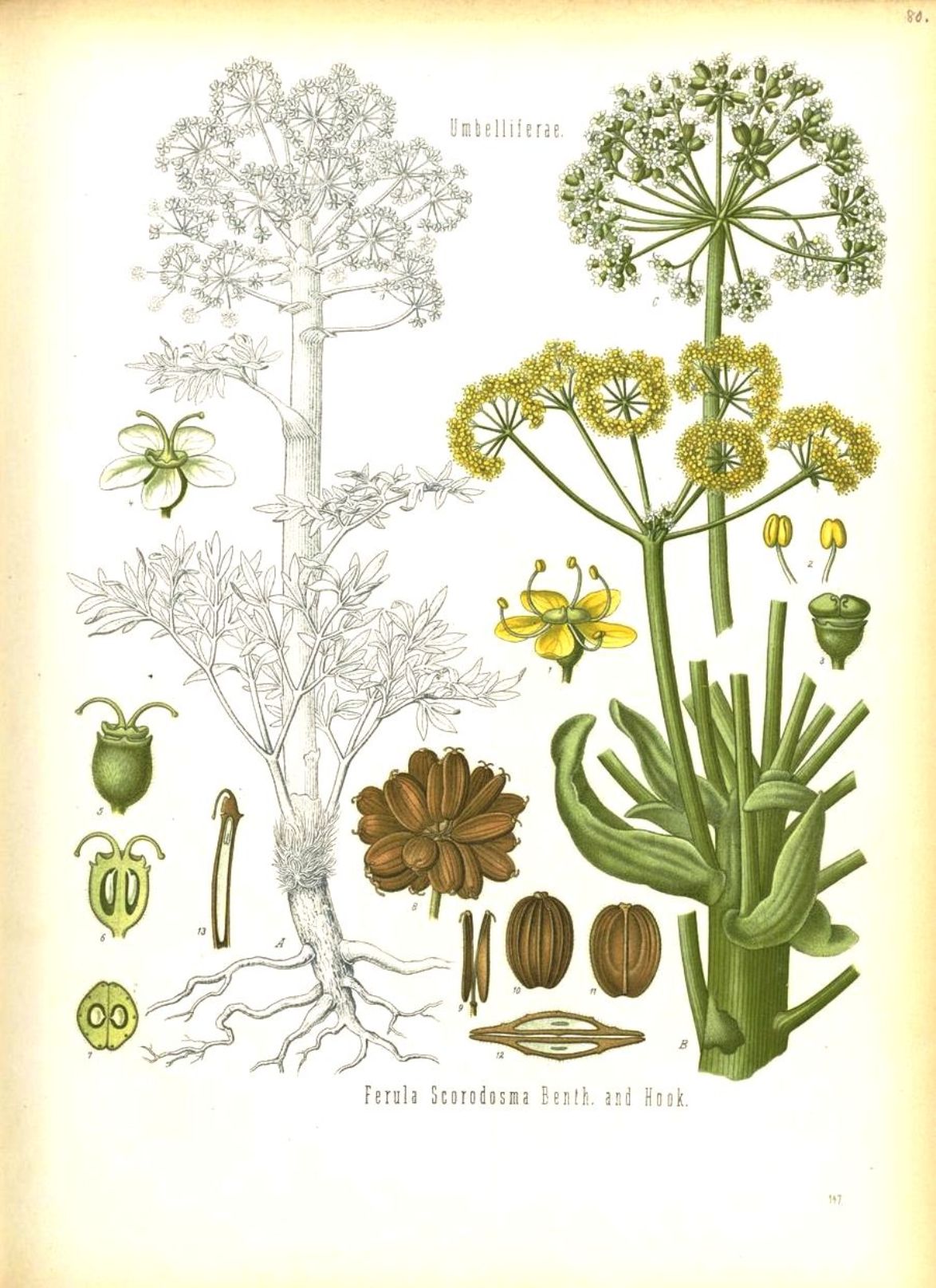 Description –
The Ferula assa-foetida is a perennial plant of considerable size, up to 2-3 m in height, with a tap root, fleshy from the cortical area from which the latex (gum / resin) exudes and collects with special procedures channels from secretory epithelial cells.
The stem is herbaceous with a circumference of about 15 cm at the base, solid, smooth and covered with membranous sheaths.
The root bark is wrinkled and blackish, and the internal structure is fleshy and white, containing a large amount of thick, milky, fetid, aliacus juice.
The leaves are few, radical and appear in autumn; they grow to about 45 cm in length during the winter and wither in late spring; they have a shiny appearance and are pinnate with pinnatifid segments characterized by oblong and obtuse lobes. The petioles are channeled only at the base.
The flowers are light yellow. It is a monocarpic plant that takes a few years before it blooms, to die after flowering.
The antesis is in the spring period.
The fruits are flat, thin, red-brown in color and emit a white, fragrant, pure and crystalline exudate.

Cultivation –
Asafoetida is a plant that grows in most soils but, contrary to its natural habitat, prefers deep fertile soil in a sunny position.
This species is not hardy in colder areas as it tolerates temperatures down to -5 and -10 ° C.
The plants have a long taproot and are intolerant to transplant so they should be planted in their final positions as soon as possible.
The whole plant, especially when pounded, has an unpleasant smell of stale fish.
The plant propagates by seed which is best sown as soon as it is ripe, or in a cold greenhouse in autumn or mid-spring. It is recommended to transplant them to their permanent locations while they are still small because the plants cannot stand transplanting.
The plant can also be propagated by division in autumn, even if the percentage of taking root can be low.

Customs and Traditions –
Ferula assa-foetida is a plant that is harvested in the wild for local use as a food, medicine and source of materials.
The use of this plant was widespread in the entire Mediterranean area since Roman times but after the Middle Ages the use disappeared from European kitchens.
Among the edible uses it should be remembered that young leaves and shoots can be cooked as a vegetable.
Although the plant has a fetid odor, this disappears when boiled.
Bent cabbage-like heads are eaten raw as a delicacy.
The root can be eaten cooked even if it is best to infuse it to remove bitterness.
A starch is extracted from the roots which is used to make a porridge.
Also from the root a gum-resin is obtained which is used as a food flavoring. It is an essential ingredient in Worcester sauce, and is also used to flavor a wide range of dishes and drinks.
The plant is popular in natural food cooking as a substitute for garlic.
The resin obtained from this plant is probably the most smelly of all herbs, with a sulphurous smell similar to garlic; it is so sickening to some people that it has been nicknamed ‘devil’s dung’. However, in moderate quantities, it gives a surprisingly pleasant flavor to many foods.
In the medical field, Ferula assa-foetida is very effective as it acts mainly on the digestive system, purifying and strengthening the gastrointestinal tract. It is widely used in the Ayurvedic tradition.
This plant has also been attributed a contraceptive and abortive power and, in this context, is considered as a less effective substitute for another plant of the genus Ferula, silphium, now extinct.
Asafoetida was used in 1918 to fight the Spanish flu pandemic. Scientists at Kaohsiung Medical University in Taiwan say asafoetida roots contain natural antiviral compounds that kill the 2009 flu pandemic virus, H1N1 (colloquially swine flu). In an article published in the American Chemical Society’s Journal of Natural Products, the researchers say these compounds could be useful for the development of a new medicine against this type of flu.
The gum-resin contains a volatile oil with a persistent aroma such as garlic. This leaves the body through the respiratory system and helps in case of a cough with congested mucosa.
The gum-resin with a pungent flavor obtained from the root is alterative, anthelmintic, antiperiodic, antispasmodic, carminative, deobstruent, deodorant, expectorant, laxative, sedative and gastric.
It is used in the treatment of simple digestive problems such as aerophagia, bloating, indigestion and constipation, and also for respiratory problems such as bronchitis, bronchial asthma and whooping cough. It is also used as a circulatory stimulant, lowering blood pressure and thinning the blood.
The resin has a synergistic effect on other herbal preparations such as camphor, valerian and nux-vomica.
It is used for the preparation of tinctures as a mild cardio-tonic.
The gum-resin is obtained from the incisions of the roots and rhizomes
This oozes and hardens, then it is cut into separable parts.
The gum should be stored in an airtight container to prevent its strong flavor from contaminating nearby substances.
Rubber is the source of an essential oil with medicinal properties and is also used as a food flavoring and in perfumery.
Among the main components of this plant we remember:
– ethereal oil, 7.5-12% with 15.3-29% sulfur;
The main fraction (40% approx.) Of the ethereal oil is a marcaptan with formula C7H14S2 (butyl-propenyl disulphide – sec.).
Terpenes (probably pinene), other sulfur components C11H20S2 (20% of the oil), C10H18S2 were also found in the essential oil. C8H16S2 and 20% of the oil of a compound of formula (C10H16O) n.
– gum, 25-48% (2), from which glucuronic acid (17.1%), galactose (14.2%), arabinose (26.5%) have been separated. rhamnose (1.7%), ash (4.6%);
– 40-64% resin, which appears to consist of asaresinotannol, free and combined with ferulic acid: 69% of resinous fraction soluble in acetone, from which about 50% of resin and ethereal oil have been separated, 1% approx. of asaresinol or free asaresinotannol, 16.57% of ferulic ester of asaresinotannol and 1.33% of free ferulic acid. It seems that the recently collected drug does not contain vanillin: this would be formed in the seasoned drug by oxidation of ferulic acid.
Umbelliferone is produced by distillation of the resin at low pressure. They were isolated from the non-volatile fraction; asaresene A, C24H32O4, three isomers, named farnesiferols A, B and C, C24H30O4; farnesiferol A would be an umbelliferone ether with a bicycofarnesyl-type sesquiterpene.
– Ashes, 1-3% in the drug in tears, up to 10% in the drug by weight.

Preparation Method –
Ferula assa-foetida is a plant that once cooked gives the preparations an aroma similar to that of garlic.
It is used for the preparation of tinctures as a mild cardio-tonic.
Its use in the kitchen is widespread in various parts.
The powder of asafoetida, obtained from the resin of the root of the plant, is widely used in Indian cuisine; it is usually grated at the moment to better maintain the aroma and for its greater purity and quality (the already grated powder often contains other ingredients). Its taste has a strong hint of sulfur, which tends to decrease with cooking, which make it unattractive to those who are not used to it; it has an aroma similar to garlic but much more spicy with a faint hint similar to that of black pepper. It is mainly used in recipes based on vegetables and rice, in a minor part in meat or fish stews, sometimes it is also added in sauces based on ghee (clarified butter).