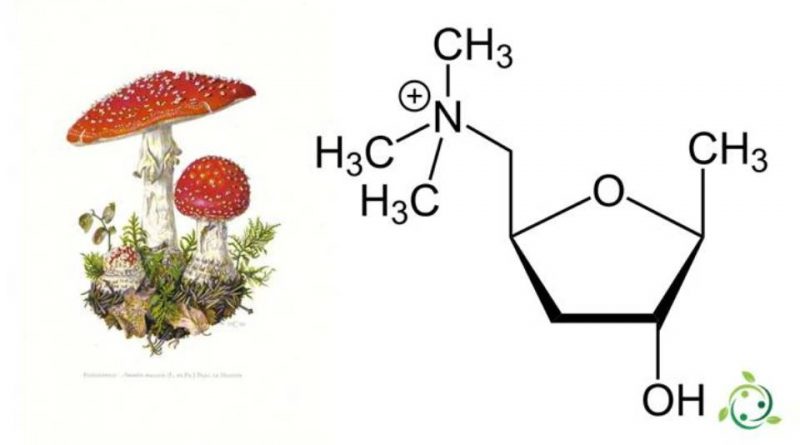 Muscarine, whose term in the official IUPAC nomenclature is: (2S, 4R, 5S) – (4-hydroxy-5-methyl-oxolan -2-yl) -methyl-trimethyl-ammonium is, from a chemical point of view, a alkaloid.
This substance has a brute or molecular formula: C9H20NO2 +.
Muscarine is contained in some mushrooms; in particular in the Amanita muscaria and in some other species of poisonous mushrooms belonging to the genera Inocybe and Clitocybe; in some of its species of the genus Inocybe it has a much higher rate of muscarine than the genus Amanita and some small species of the genus Clitocybe have been found to be particularly rich in muscarine.
From the physical point of view, muscarine is thermostable, colorless, odorless, tasteless and is soluble in water and alcohol in any percentage.
Historically it was isolated for the first time by Amanita muscaria in 1869.
Muscarine is toxic as it acts on the parasympathetic branch of the autonomic nervous system, where it exerts effects similar to those of acetylcholine.
It is an agonist of cholinergic receptors, as it binds to these receptors, activating them like the natural ligand. In particular, it acts selectively on some of these receptors.

Muscarine, together with nicotine, made it possible to divide cholinergic receptors into two large classes: nicotinic receptors and muscarinic receptors, depending on whether they bind nicotine or muscarin.
A muscarine poisoning, which can occur due to contamination of edible mushrooms or by mistaken ingestion, is characterized, from a symptomatological point of view, by a strong generalized cholinergic action with symptoms of:
– vomiting, diarrhea, gastro-intestinal pains, sialorrhea, profuse sweating, miosis, bradycardia, hallucinations and convulsions.
In this case it is necessary to intervene promptly with a muscarinic receptor antagonist to block the excessive activity of the parasympathetic, before damage to the liver and kidney occurs; for example, it is possible to intervene with atropine-sulphate intravenously.