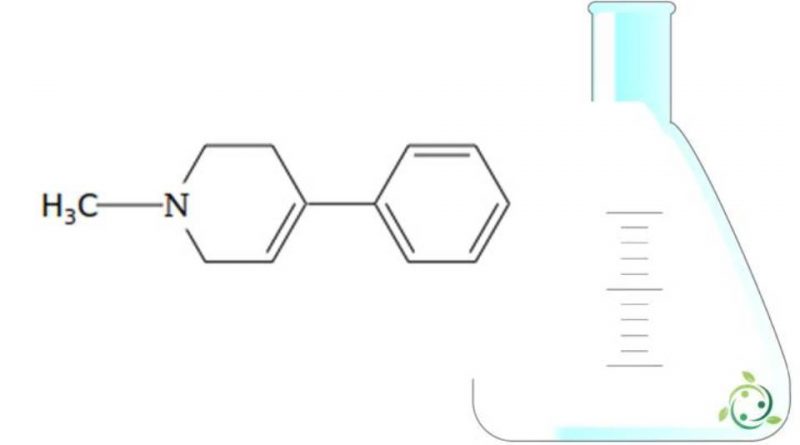 MPTP, whose term in the official IUPAC nomenclature is: 1-methyl-4-phenyl-1,2,3,6-tetrahydropyridine is an alkaloid.
This substance has a brute or molecular formula: C12H15N.
MPTP is a secondary compound that is formed during the synthesis of meperidine; it is a neurotoxic substance that is capable of causing symptoms similar to Parkinson’s disease.
The side effects of Parkinson’s caused by MPTP are linked to the fact that this substance passes the blood-brain barrier very well, entering the glial cells where the MAO-B (monoamine oxidase-B) oxidize it into MPP +. MPP + enters dopaminergic cells, in a brain area called the substantia nigra, exploiting the dopamine carrier and causes neuron death because it inhibits mitochondrial respiration and oxidative stress is established which generates further damage.
The neurotoxicity of MPTP was discovered in 1976 after Barry Kidston, a 23-year-old chemistry student from Maryland, synthesized MPPP (Desmethylprodine) and injected it. He was contaminated with MPTP and after three days he began exhibiting symptoms of Parkinson’s disease. The National Institute of Mental Health found traces of MPTP in his lab and accidentally discovered his effects by testing the substance on mice.
Since MPTP itself is not directly harmful, the toxic effects of acute MPTP poisoning can be mitigated by the administration of monoamine oxidase inhibitors (MAOIs) such as selegiline.

MAOIs prevent the metabolism of MPTP to MPP + by inhibiting the action of MAO-B, minimizing toxicity and preventing neural death.
MPTP causes parkinsonism in primates, including humans. Rodents are much less sensitive. Rats are nearly immune to the negative effects of MPTP. Mice were thought to suffer from cell death only in the substantia nigra (to varying degrees depending on the mouse strain used) but did not show Parkinsonian symptoms; however, most recent studies indicate that MPTP can cause parkinsonism – like syndromes in mice (especially chronic syndromes). Lower MAO-B levels in rodent brain capillaries are thought to be responsible for this.
MPTP is also a chemical compound that is related to opiate analgesics. However, this substance alone has no opiate effects, but it can be accidentally produced during the illegal creation of MPPP.