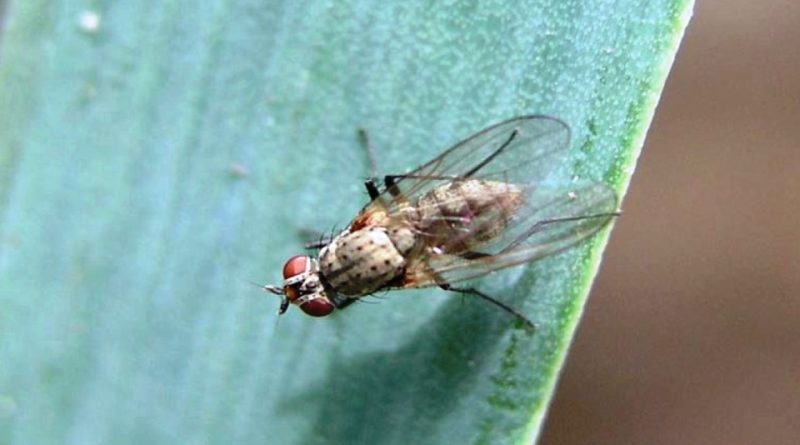 The onion fly (Delia antiqua Meigen, 1826) is a dipteran belonging to the Anthomyiidae family.

Geographic Distribution and Habitat –
The onion fly is an insect with a wide distribution; it is found in North America, Western Europe, Russia, Central Asia, China, Japan and Korea, but is not present in deserts. In the extreme north of its range, it has one generation per year, but descending to lower latitudes it can have from two to five generations per year.
It is an insect that lives on the Onion, Shallot and Leek, infesting the bulbs, destroying the tissues it feeds on; moreover, the infested bulbs are invaded by bacteria which cause their decomposition.

Morphology –
Delia antiqua is a dipteran which at the adult stage has a length of 6 – 7 mm, with a yellowish gray color with 5 darker bands on the thorax, legs and black antennae. It is a fly very similar to the house fly (Musca domestica L.).
The eggs have a length of about 1.5 mm and are of a matte white color, not shiny, elongated and longitudinally striated.
The larvae have a length of 8 mm when fully developed and are whitish in color.
The pupae are 7 mm long and 2.5 mm in diameter and vary in color from light brown to dark brown, ringed and ovoid in shape.

Attitude and Life Cycle –
The onion fly is an insect that develops from 2 to 5 generations per year (only one generation in the most severe climates). This dipteran overwinters in the pupal stage, in the ground.
From April to May, depending on the latitude, there are adults.
The female lays 150 to 200 eggs in successive cycles 15 days apart. These are deposited alone or in groups of 15 to 20 in the vicinity of the host plant, often on the collar, sometimes under the axilla of the leaves or between the scales of the bulbs. The duration of the embryonic evolution varies from 2 to 7 days.
In the periods in which the deposition takes place, it does not remain in the crops. Second generation adults born in July lay in the same way as adults born in spring.
Adults have a lifespan that does not exceed two months.
The larvae have a life span as a function of temperature; 45 days at 15 ° C and 17 days at 25 – 30 ° C. These penetrate the tissues between the leaf shoots or at the base of the roots. Furthermore, in the lesions, rots due to beating are installed, in particular of Bacillus carotovorus. The larvae feed on some decaying tissues. At the end of their development, they abandon the host plant and burrow into the soil at about 5 – 10 cm of depth thus passing to the nymph stage, or entering diapause at the beginning of September when the soil temperature is lower than 15 ° C.
The nymphs have a developmental duration between 15 and 25 days.

Ecological Role –
The onion fly is an insect that, in the event of serious infestations, can cause serious damage especially to the first generation that extends over a very long period due to the longevity of the female. This damage occurs mainly on the seeds of the onion, the leek, the transplanted onions, and the shallot.
On young Onions the damage is very serious and can lead to their death.
A larva can attack many plants in succession. If the plant is more developed, it blooms, especially in warm periods, and can subsequently die. Later the attacks of the Delia antiqua favor the onset of rot, visible only to the uprooting, which attracts other scavenger Diptera. In this case we find the larvae also in the bulb. On the fields of transplanted leeks, the attacks of Delia antiqua manifest themselves with a yellowing in areas and with a drying up of the plants that rot.
The fight against the onion fly is agronomic and unfortunately also a chemical one, which in the long run completely unbalances the biocoenosis of the fields where it takes place.
The interventions must instead tend to agronomic practices such as the implementation of postponed sowing, to avoid the damage of the 1st generation which is the most dangerous. Furthermore, intercropping with other horticultural species and rotation programs with crops on which the fly cannot carry out the life cycle must be reintroduced.
The chemical fight that is carried out in advance with soil disinfection, especially in areas where the presence of the phytophagus is constant, solves the local problem but never recomposes the correct biocenosis of this insect and its parasites.
Even the fight with phosphorganic agents, carried out on adults in the flickering phase or on the juvenile stages originated, often marginally solves the local problem of the single company but, at a district level, creates ever greater ecological imbalances year after year.